Britain Is Testing An Amphibious House That Rises Along WIth Floodwaters

Britain's Environmental Agency is taking a keen interest in housing technology that embraces flooding rather than fights it. 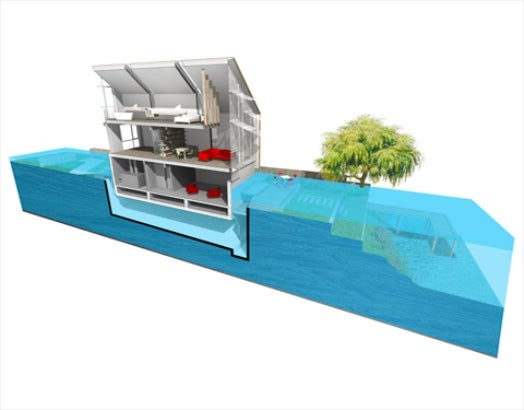 When floodwaters rise there aren’t a lot of places to hide, and in the oft-rainy UK that can spell big problems and major property damage. So in an attempt to mitigate the problem, British authorities have just built the country’s first amphibious house on the banks of the River Thames. When the river rises, the house rises with it. Bring on the Biblical deluge.

Britain’s Environment Agency is not the first to dream up or even build a floating domicile of this kind–variations on this theme exist in Canada, Germany, and the U.S. for instance, as well as in some Southeast Asian and Latin American countries (where homes are commonly built on stilts to avoid seasonal floodwaters). But for the UK government to take an active interest in modern buoyant abodes is significant in that it could help drive technology development forward in coming years. It also serves as a kind of indicator that governments around the globe are quietly recognizing that the coming decades are likely going to bring increasingly nasty weather events.

For guidance in floodwater control the British are naturally looking to the Dutch, reports the BBC. Much of the Netherlands is below sea level, and the Dutch have a reputation for having the best flood mitigation technology on the globe. Several years ago, a Dutch firm built a few floating houses outside of Amsterdam to see how they might work. Another Dutch design house is working on a multi-unit apartment complex that could float on water.

The British concept, designed by UK firm Baca Architects, builds on these earlier ideas. Secured in place by four vertical posts sunk deep in the ground, the house resides partially submerged in the ground in a kind of dock lined with retaining walls and seated on a concrete slab. If floodwater begins to flow across the surface of the land, it is diverted down into this dock, where it begins to fill the chamber in which the house rests. The house itself is designed as a kind of free-floating pontoon, buoyed upward by hollow chambers made of wood and concrete. Secured in place by those four posts, the house can move vertically but not laterally, so it won’t float away.

When flooding subsides, it comes to rest again in its original position in the dock, its occupants and their possessions no worse for wear. At least, that’s the idea. We’ll have to wait and see if this one sinks or swims, but the idea is intriguing in a world where sea levels are on the rise and population growth increasingly drives human habitation toward places where water often wants to flow.