BeerSci: What To Drink During A Hurricane

Self-medication is only the start. 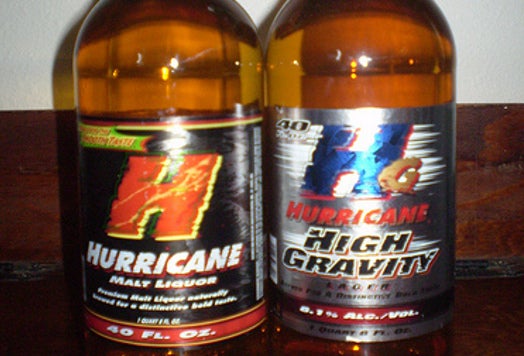 Team BeerSci is trapped at home with a few Zone A refugees and we’re contemplating how to pass the time as Hurricane Sandy approaches. It’s not a tough decision: we made sure to put plenty of homebrew in the fridge last night, and there is a high probability that one will make an appearance on my desk next to the computer in the next few minutes.

But beyond entertainment and stress-relieving beer, homebrewing brings other practical advantages during a natural disaster. As a homebrewer, we have multiple five-gallon buckets kicking around. We’ve just filled our two bottling buckets (one regular, one sour) with water in case of an “interruption of service.” We also have at least 4 empty growlers and 20 clean bombers just waiting for the next round of bottling, some of which will also be filled with water.

We won’t drink the stuff, of course — that’s what beer is for. But for toilet-flushing duties, extra water is crucial.

Beer names are an important part of brewing — we frequently come up with a name and concept first and then develop recipes around those concepts: Walpurgisnacht, Joe Montana, etc. So I was curious to see which beers have a name that includes “hurricane.” According to RateBeer, there are 53. I think my favorite, for reasons beyond actual flavor, is Hurricane High Gravity Lager. Made by Anheuser-Busch, Hurricane rates an eyebrow-raising ZERO out of 100 points (category 5 disaster on your palate), with 229 votes and counting. Serving suggestions include “paper bag.” But at 8.1% ABV, Hurricane malt liquor (the definition of a malt liquor varies by state to state, but is generally understood to be a light-colored lager with a high ABV) will clearly get the job done. 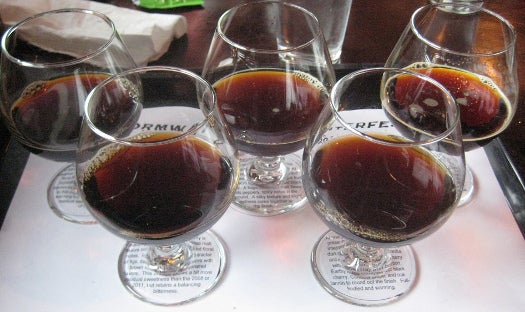 We drank this sampler set, including the Mother of all Storms, during a winter storm coming off the Pacific.

Other storm-related brews we can recommend:

Moving beyond beer (because, at some point, it’s time to switch to the hard stuff), CocktailDB has five recipes for drinks with “Hurricane” in the name. All involve rum, as does the Dark and Stormy, so hopefully you have some of that in your bar. I’d make some noise about “staying safe,” but you’re all adults. So, tell me, what are you drinking to get through this storm?