A Restaurant With Adjustable Acoustics

Fun fact: When the music in a bar gets 22 percent louder, patrons drink 26 percent faster. But if the... 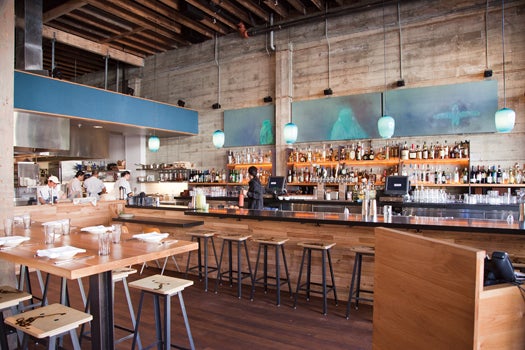 Fun fact: When the music in a bar gets 22 percent louder, patrons drink 26 percent faster. But if the crowd itself gets too loud, the owners (unfortunately) can’t turn down the volume. Isn’t there a better way to handle the babble?

It’s Saturday night at a restaurant. The food’s fantastic, the service flawless. The conversation? It gets off to a good start, but as the number of guests rises, diners struggle to hear and be heard over the mounting cacophony.

When John Paluska envisioned Comal, his Mexican restaurant in Berkeley, California, he wondered whether he could find a new way to overcome what Zagat Survey says is restaurant-goers’ second-most-frequent complaint: noise. Paluska, who managed the band Phish for nearly 20 years, wanted Comal to have a “buzzy” ambience, but he also wanted his guests to be able to hear their friends across the table no matter how many people were in the room. To acoustically dampen the restaurant Comal, engineers installed echo-killing original art and panels (top). Then they added a microphone and speaker system (bottom) that samples room noise, makes it more diffuse, and plays it back at adjustable levels.

Paluska turned to Meyer Sound Laboratories, a Berkeley-based loudspeaker company, which created a system that turns the eatery into two zones with adjustable acoustics.

Finally, engineers installed 28 overhead microphones that sample ambient noise from the room. A digital processor lengthens sounds and minimizes high-pitched noises (such as forks hitting plates), which amplifiers combine with music and send into the room via 95 speakers and subwoofers.

Diners experience a wash of diffuse background sound. Paluska can separately modify the reverb near the bar and in the dining areas to adjust for occupancy levels and create a buzzier or more relaxing vibe.

Meyer Sound will build a similar system for other restaurants, for a price—anywhere from $10,000 to more than $100,000. With so much riding on a diner’s auditory experience, that could be a good investment.

A version of this article appeared in the October issue of Popular Science magazine.