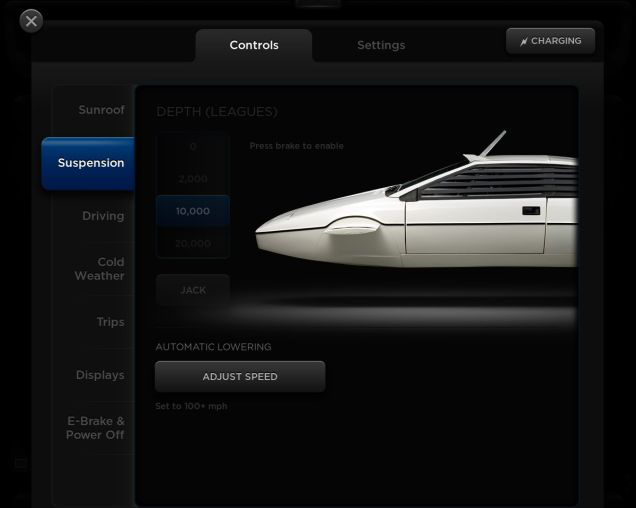 James Bond may favor Aston Martins and Bentleys when he hits the road, but it turns out that Tesla Model S owners can channel a bit of the British superspy.

The dashboard on the electric car has a top secret Easter egg: hold down the T button on the entertainment system and you’ll trigger a prompt for an access code. Enter 007 and visit the Controls section of the system. The display, which usually shows an image of the Tesla, instead features a picture of the Lotus Esprit car/submarine combo from the 1977 Roger Moore outing The Spy Who Loved Me, including a Depth drop-down menu that maxes out at, naturally, 20,000 leagues. Needless to say, your Tesla is not equipped with submersible capabilities, so please avoid driving it into the nearest lake.

That seems like an idea that may have come right from the top. Tesla CEO Elon Musk bought the actual Esprit from the Bond movie at auction in 2013, and said that he intended to turn it into an actual working submarine. (Though, to be frank, those plans sound more towards the supervillain end of the scale.) The Easter egg was reportedly confirmed to have been in place for a year, and is only now being discovered, suggesting that the Tesla software engineers might make excellent covert agents themselves.

No report yet on whether the Model S has any other MI6 tricks squirreled away, such as a smokescreen, a bulletproof shield, or a “shaken, not stirred” option for its adjustable suspension.