Superfast Lasers Create A Hologram You Can Touch 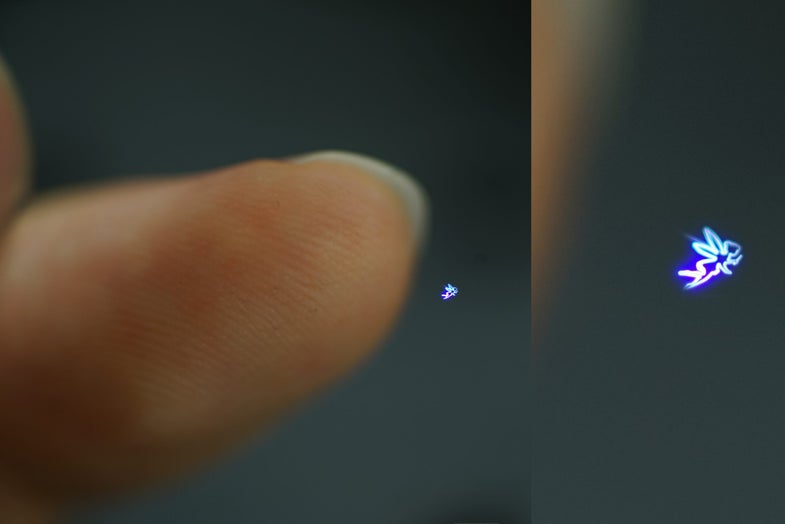 The halls of science fiction are well-decorated with dreams of holograms—Jules Verne introduced holography to literature in 1893 with The Castle of the Carpathians, and how else would we know that Obi-Wan was Leia’s only hope?

Now, researchers at the Digital Nature Group(DNG) have found a way to use lasers, mirrors and cameras to create three-dimensional, interactive holograms comprised of tiny points of light called voxels.

Using femtosecond lasers (a femtosecond is a quadrillionth of a second, and the lasers transmit bursts that last 30 to 270 femtoseconds), the team can make holograms that are safe to touch. The images are three-dimensional, with resolutions up to 200,000 dots per second. The voxels are light emitted by plasma that’s created when the laser’s focused energy ionizes the air.

When touched, the laser feels like sandpaper, says principal investigator Yoichi Ochiai, although some participants thought the plasma felt a little like a static shock.

Since the lasers fire at such a high speeds, they’re able to react in realtime, and researchers have demonstrated its ability to make usable holographic checkboxes and hearts that break when touched.

To create their hologram, researchers fired their femtosecond laser through a spatial light modulator, which continues the beam through a series of lenses, a mirror and a Galvano scanner, which positions a mirror to precisely direct the laser beams. A camera underneath the hologram captures user interaction, allowing the dots to respond to being “touched.”

Ochiai says the most surprising thing he realized was that plasma was actually safe to touch in this application, making the hologram exponentially safer than previously thought.

The key to making these holograms safe is the shorter duration of the laser’s bursts. In tests, if the lasers fired in more than two second bursts, they burnt the leather researchers used to simulate skin. But, if they transmitted at 50 milliseconds to 1 second bursts instead, the leather was unscathed.

Ochiai says this is machine is just a proof of concept, and now his team will work to make the holograms larger. They’re limited by the size of the spatial light modulator, which they maxed out with this experiment. The laser itself can transmit up to 7W, and this 1 cubic centimeter experiment only used 1W of the laser’s power.