The story behind a unique flying observatory—and why it's being retired. 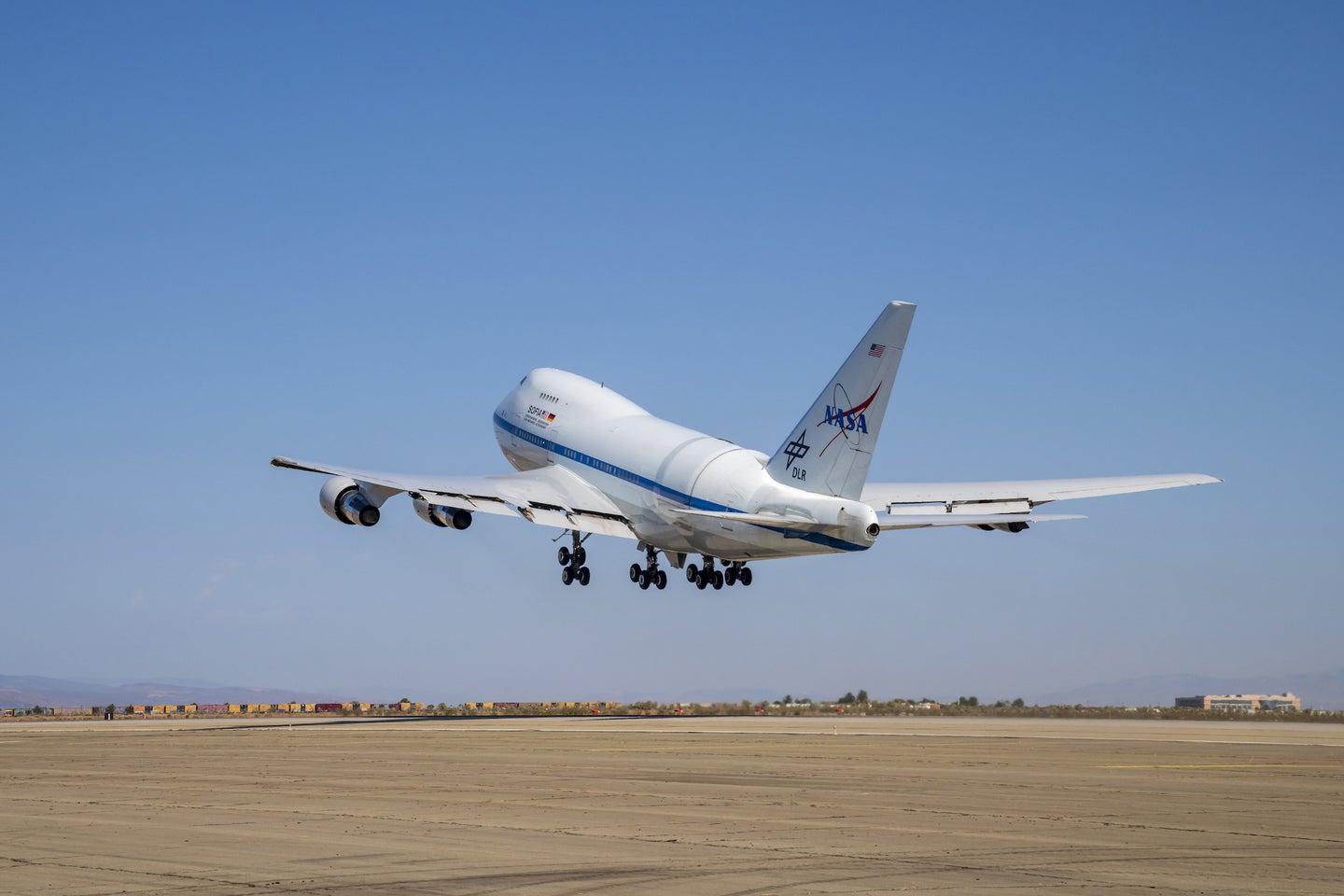 One of aviation’s most fascinating marvels is nearing the end of its life in the sky. After operating for only eight years of its planned 20-year lifetime, the unique Stratospheric Observatory for Infrared Astronomy (SOFIA) aircraft, a retrofitted 747 with a 17-tonne reflecting telescope on board, is retiring.

The aircraft first flew in 1977. Built originally as a commercial plane for Pan Am, the Boeing 747SP was christened as the Clipper Lindbergh in recognition of Charles Lindbergh, the famous American aviator who completed the first solo nonstop flight across the Atlantic in 1927. The craft was later sold to United Airlines, before being acquired by NASA in 1997.

Using the nearly 9-foot diameter infrared telescope that lies inside a cavity in the aft section, or the rearmost part of the plane, the airborne observatory has since discovered water on the surface of the moon, revealed new planetary systems, and found the first kind of molecule to form in the aftermath of the big bang. Not bad for an airliner originally built to just ferry people around.

A variant of the classic 747 planes many aviation fans know and love, SOFIA is a much shorter, “stubbier” version of the jumbo jet, made specifically for long-distance flights. A collaboration between NASA and the German Space Agency (DLR), SOFIA operates out of an agency hangar in Palmdale, California. The craft has logged upwards of 980 observing hours every year, averaging about seven to nine hours of scientific observation per flight.

It sports a wingspan of 196 ft, and can also reach about 450 knots, or about 520 miles per hour when at its preferred height of 41,000 ft above sea level. “Think of it as like the hot rod of a 747,” says Ting Tseng, NASA’s chief engineer for the SOFIA mission.

Tseng, who has worked on the craft since 2006, led the team that turned it into the powerhouse of scientific discovery it is today. But before SOFIA could take to the skies, the craft underwent some serious modifications and maintenance to optimize its potential for science data collection.

One unique modification involved making the fuselage, or the main body of the plane, thicker than a normal craft to ensure the telescope could operate safely. But to create a cavity large enough for it to fit, the team had to cut a hole in the aircraft’s side — a solution that is just as problematic as it sounds.

“If you cut a hole into an airplane, then there’s the chance that the air stream will go into that hole and exert considerable force onto the airframe inside,” says Bernhard Schulz, deputy director of SOFIA science mission operations and a representative of the DLR’s side of the project. “Basically, it can rip the entire tail off.”

Team engineers solved this by creating a special telescope cavity door. “The door system is one-of-a-kind,” says Tseng. “You won’t see any of that type of system in any other aircraft.” The rigid structure weighs over 3,000 pounds, and helps minimize airflow inside and above the telescope cavity, guaranteeing turbulent weather doesn’t impact instrument measurements.

With a flight range of about 6,625 nautical miles, SOFIA is able to set out and return from its missions in the same day. “Depending on what observations we’re making for a particular instrument, we can fly all over the United States and sometimes into Canada,” Tseng says. But to do that, the aircraft requires a ton of fuel; it can carry a maximum of 300,000 pounds.

In 2012, SOFIA’s analog gauges and hardware were modernized, and many of its current science and communication systems are now automated, tied together through a series of integrated computers and devices.

It was a move that promised to propel it well into the future, but sadly for those nostalgic for 747s in general, the craft could soon be resigned to the annals of history.

Although SOFIA will continue to fly science missions until September 30, there’s no other observatory slated to take its place, or to provide the space community with the same wavelength of data it gathers.

NASA’s decision to retire the mission cited community concerns over productivity and cost of the project. Compared to a space mission, SOFIA tends to cost more due to the pilots, fuel, and maintenance required to fly it. But Schulz says the difference in cost is worth it when you consider the kinds of science the craft has enabled.

“It will probably be the last type of airplane observatory that works this way,” Schulz says. “It’s a great asset [and] it works perfectly. It’s a shame to shut it down right now and put it into a museum.”

But SOFIA’s fate isn’t sealed yet: In fact, this isn’t even the first time the mission has been up for cancellation. Although it would require an action from Congress to save the mission and its funding, Schulz says “it has happened before.” And during an Astrophysics Town Hall on May 3, Paul Hertz, NASA’s astrophysics division director fielded questions about the aircraft’s future, a topic that many members of the general public seemed to support extending.

But for the scientists and engineers intimately familiar with the mission, some recognize that while bittersweet, pulling the plug on the mission early isn’t the end of the world.

“NASA programs don’t last forever and we’ve come to the end of the road,” says Tseng. “I’m just happy I was part of this incredible observatory, and was able to make this a great aircraft.”