JD.com's robot can carry 1 ton of cargo by air. 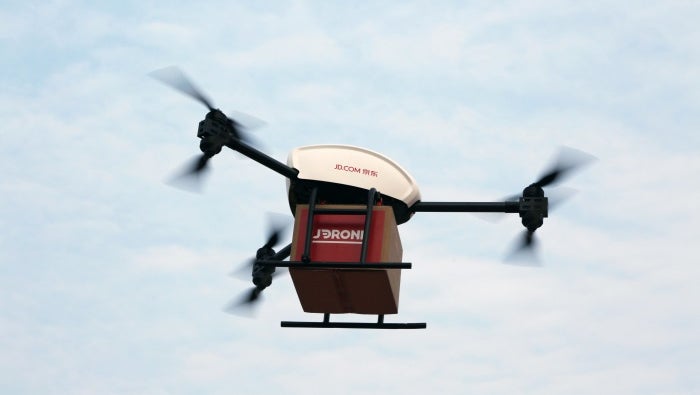 As part of its multi billion-dollar plan to build a nationwide network of automated logistics, China's JD.com is testing its tri-copter drones in testing zone in Shaanxi. JD.com
SHARE

JD.com’s robots will be autonomous, three-engine, vertical-takeoff drones that can carry a payload of over 1 ton up to 186 miles. They’ll be the world’s largest delivery drone on the civilian side. The U.S. military, of course, has the KMax, but no American commercial entity has anything close; Amazon is still wrestling with the FAA about where and when it can safely fly its parcel-carrying quadcopters.

The Shaanxi provincial government has agreed to let JD.com operate hundreds of low-altitude routes within a 300km radius, an area of more than 11,500 square miles. Currently, the intended customer target is Shaanxi farmers, who can use the drones to distribute their perishable fruits, vegetables, and meat without worrying about Shaanxi’s rough, rural roads.

JD.com has made a major investment in this space beyond the work in Shaanxi. It is also building a 30-acre logistic and robotics research center in Xian, which will include HQ for JD Logistics, a cloud computing center, and a drone factory. After it establishes a working concept for large-scale drone delivery, JD.com wants to master inter-province drone aerial delivery, and then branch off to include global partnerships with international logistics providers.

The large payloads and AI enabled logistics network have applications beyond e-commerce. It can be a force multiplier for Chinese efforts abroad, like the One Belt One Road infrastructure initiative in Eurasia, or the PLA’s dreams to augment and automate its peacekeeping and expeditionary logistics.