China and Russia want to build a jumbo jet similar to those offered by Airbus and Boeing. Last month they officially launched the China-Russia Commercial Aircraft International Corporation (CRAIC), a group that will spend between $13 billion and $20 billion building a 280-passenger, twin-aisle, wide-body jet.

This partnership between China’s COMAC (Commercial Aircraft Corporation of China, Ltd.) and Russia’s UAC (United Aircraft Corporation) is aiming for a first flight in 2022 or 2023, and service entry in 2025-2027, according to Aviation Week. While the Boeing/Airbus duopoly is projected to take 90 percent of the projected 9,100 jumbo jet market up to 2025; Reuters says that CRAIC aims to develop take the remaining 10 percent of market share. As a 250-300-passenger jet, the C929 will compete with the similarly sized Boeing 787 and the Airbus A330neo, both of which use advanced engines and composite fuselages for high fuel efficiency. All three jumbo jets will rely on a global supply chain to provide engines, fuel systems, avionics, electrical power systems and life support systems.

The CRAIC headquarters and factory will be located in Shanghai, while the majority of initial research and development—as well as subcomponent assemblies—will happen in Moscow and other Russian cities.

Both COMAC and UAC each own 50 percent of CRAIC, and each company can appoint four persons to the board of directors. 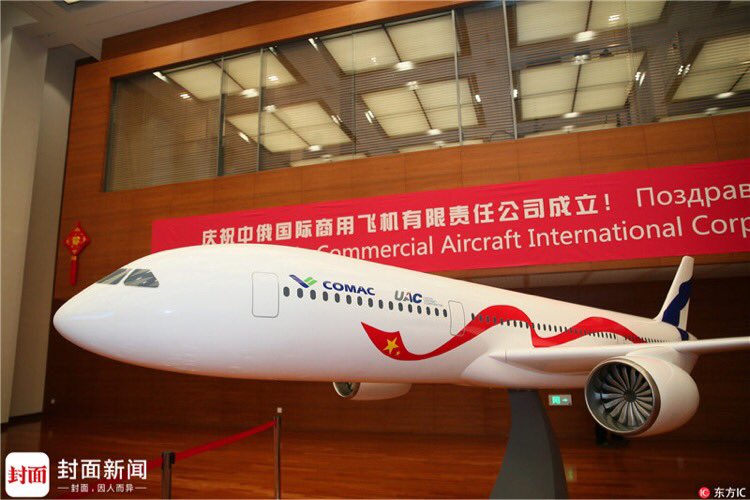 CRAIC, a 50/50 joint venture of COMAC and UAC, was formally launched on May 22, 2017 in Shanghai. Its inaugural product will be the C929 jumbo jet, seen here at the launch ceremony.

The Global Times stated that the “C929” (its final name is still up for grabs) is a 7,500-mile-range jumbo jet that can seat 280-290 passengers in a three-class configuration; a stretch version could seat 350 passengers, while the smaller variant has room for 230 passengers.

It will have a maximum takeoff weight of 220 tons for the standard variant, be powered by twin 35-ton thrust engines, and have a 361-foot wingspan. UAC will be responsible for assembling the wings, engine pylons, and housing, while COMAC will build the fuselage and tail sections.

The C929 has upward-pointing winglets on its wings, to reduce drag and improve fuel efficiency. The wing itself will be made of composite material and manufactured in Russia.

As with all other modern passenger jets, the C929 will be highly integrated into the global supply chain. Its initial turbofan engines are almost certainly going to be provided by Western engine makers like Rolls Royce, Pratt & Whitney, or General Electric.

What’s more, COMAC has solicited information from Honeywell and United Technologies for cockpit avionics and other flight systems. While much of the C929’s supply chain is international, CRAIC intends to bring in revenue by selling services (like maintenance and logistics) as well as upgrade packages. 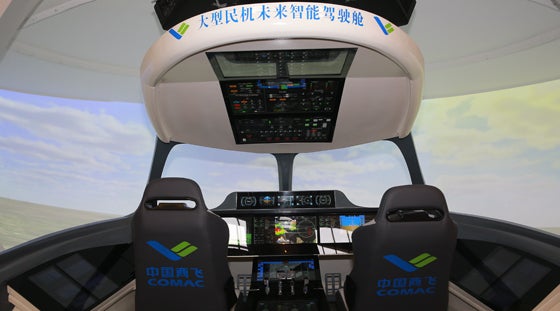 CRAIC hopes that the low operating costs of the C929, as well as financing and leasing options, will make it attractive to international buyers.

In addition to the expected rush of Chinese air lines, current buyers of Russian airliners in the former Soviet Union and the Middle East may prove to be ready C929 export customers.

The domestic implications are pretty huge, too: a C929 outfitted with completely domestic content could be developed into mission variants for airborne early warning and control, electronic warfare, nuclear command and control systems, presidential transport, and aerial refueling.