Is this a model of China’s next aircraft carrier?

A scale model at a Chinese naval exhibit gives us clues about the China’s next carrier class. 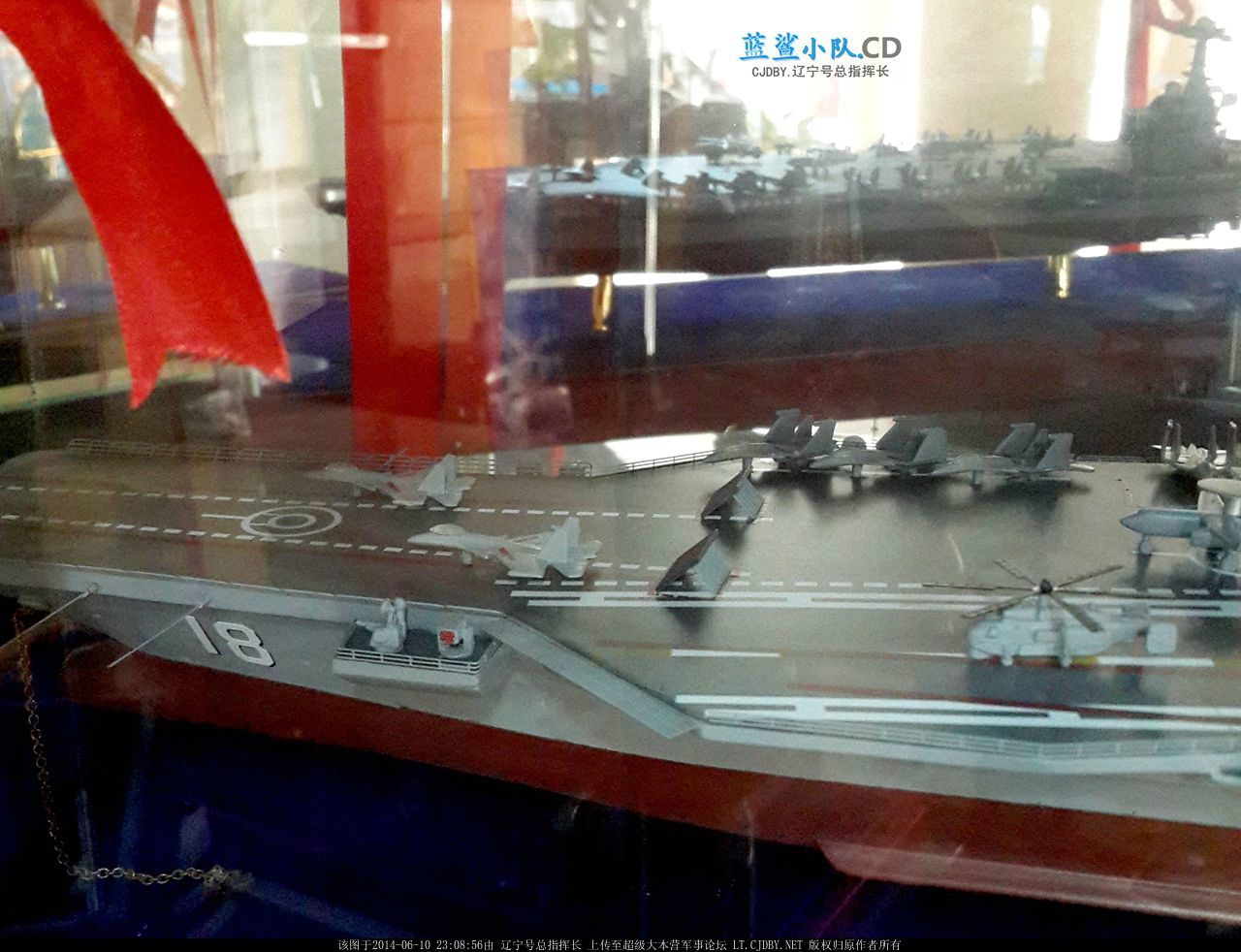 As represented, the CV-18 has catapults to launch J-15 fighters with heavier payloads and dedicated airborne early warning and control (AEW&C). lt.cjdby.net
SHARE

Photos of a potential new Chinese aircraft carrier, spotted as a model now on display at the Dalian Naval Exhibition Center, are raising questions about the future power of China’s military. It’s unclear to what extent the model will become a full-scale, functioning carrier, though the display hints at China’s future Navy plans.

To put in perspective: if this carrier is put into operation, it would give China the type of large strike carrier capability currently possessed only by the U.S. Navy.

High-profile Chinese military projects, like the Lijian stealth UCAV, have appeared in model form at official and semi-official exhibitions. This Lijian UCAV model was seen in a September 2011 airshow, while the Lijian’s maiden flight occurred two years later in November 2013.

Of course, this model could be totally unofficial. But there are a few factors that make us consider this seriously. For one, it wouldn’t be the first time a Chinese military project made an impromptu debut as a model at arms shows and military exhibitions. The J-31 stealth fighter, the PLZ-05 self-propelled howitzer, the Lijian drone, and the YJ-12 supersonic anti-ship missile were all first seen in miniature at exhibitions.

For two, the presence of PLA officers at the exhibit’s launch is notable.

For three, if it is just speculative concept, the model is rather conservative, particularly in its depiction of the carrier’s air wings, which excludes more speculative elements like J-31 stealth fighters and Lijian stealth unmanned combat aerial vehicles. Additionally, given that the likely launch date of CV-18 is in the mid 2020s, a lot of details about the actual carrier could change between 2014 and 2025, including sensor outfit, self defense weapons, aircraft complement, and catapult/aircraft elevator locations. 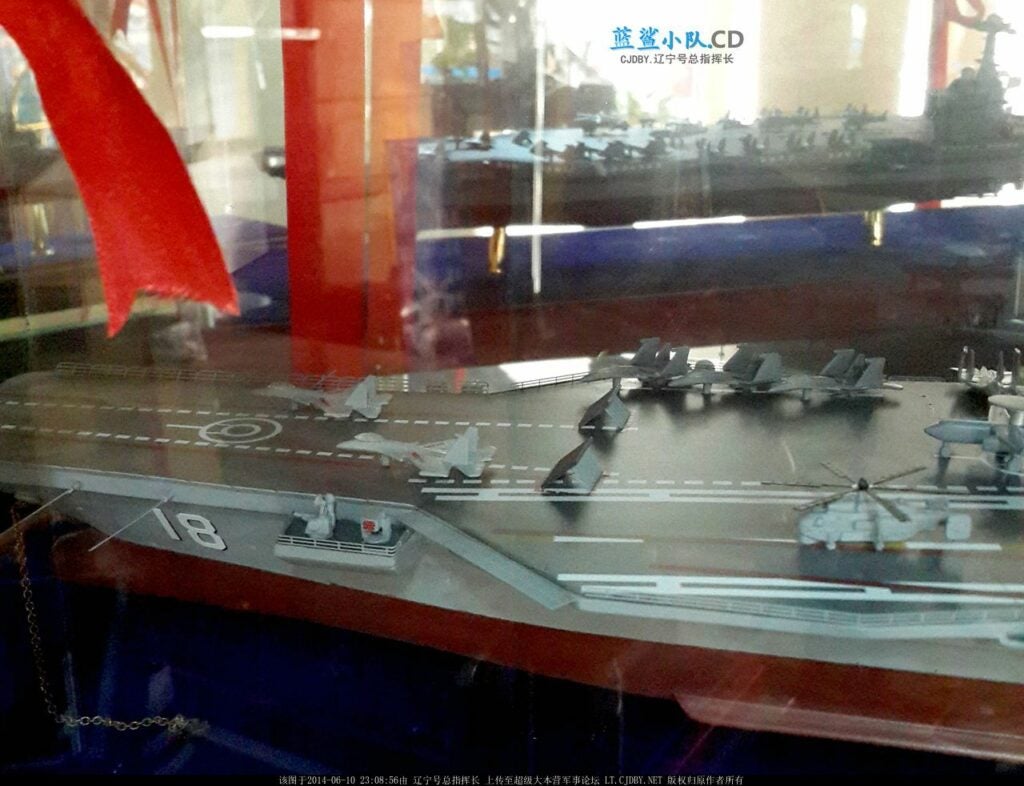 As represented, the CV-18 has catapults to launch J-15 fighters with heavier payloads and dedicated airborne early warning and control (AEW&C).

At the very least, it provides a sense of Chinese planning concepts for the future. Compared to the Lianoing (CV-16), the hull number of this new carrier is 18, which suggests that this carrier would be China’s second indigenous carrier, and the first of a truly new design (number 17 is believed to be a modified domestic variant of the Liaoning).

The carrier is shown to have three aircraft elevators, two on the starboard (right) side and one on the port (left) side, and four catapults (possibly electromagnetic) to rapidly launch aircraft. This would give it a size and scale of around 80,000 tons. Photos show that the model, presumably of the future “002” class, would carry J-15 fighters, Z-18 anti-submarine warfare helicopters, and a JZY-01 airborne early warning and control (AEW&C) aircraft. While the JZY-01 would provide a carrier air wing with strong airspace detection capabilities, its large weight precludes it from being launched off the ski ramp equipped Liaoning. CV-18 appears to be defended against missile attacks by Type 1030 Close In Weapons Systems (CIWS) and HQ-10 short-ranged surface-to-air missiles; presumably its escorting destroyers and frigates would take the lion’s share of air defense and anti-submarine warfare (ASW) duties.

As with those in the U.S. Navy, Chinese carriers would be at the center of a formidable naval task force, including modern stealthy cruisers, destroyers, and attack submarines geared to hunt air, surface, submarine, and missile threats. 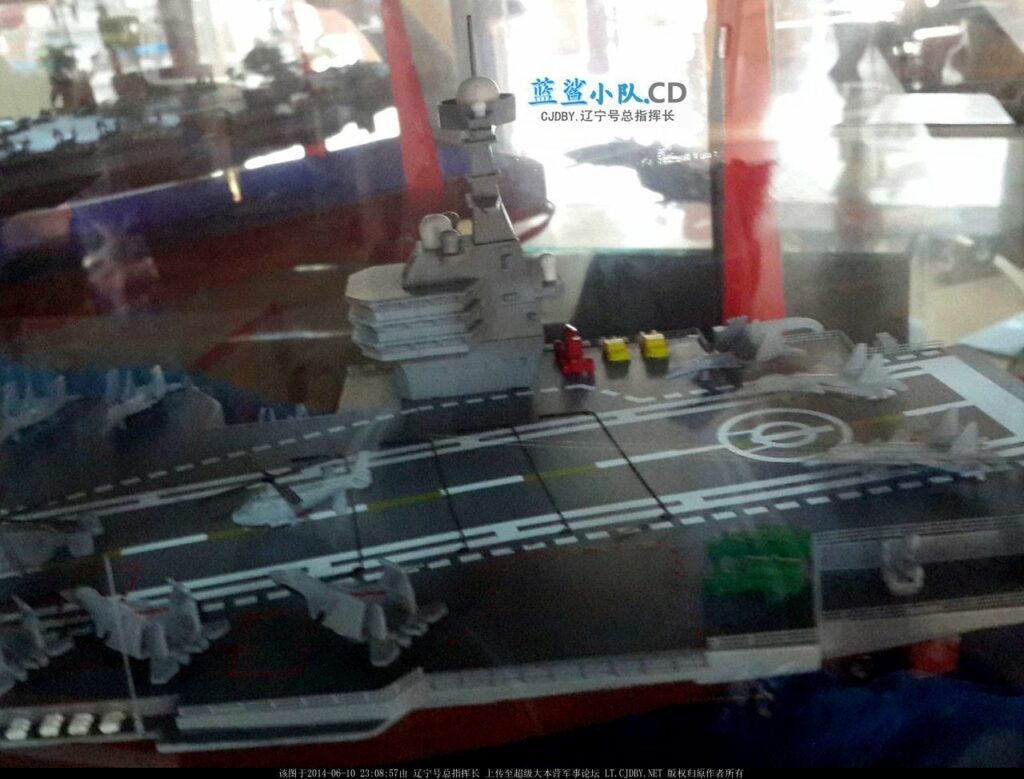 The CV-18 model shows a three-level bridge island, which suggests the presence of large command facilities for the carrier air wing.

The CV-18 model’s island is located on the starboard side, with three levels of windows, suggesting a three-level bridge and command structure. The domes on top of the island would most likely house datalink communication and radar arrays. There is no information on the propulsion, but the choices are likely to be either nuclear propulsion or integrated electric propulsion (IEP) powered by gas turbines. Nuclear propulsion would provide CV-18 with a un-refueled global range of operations at over 30 knots per hour, while IEP would provide extra electricity for direct energy weapons like lasers. 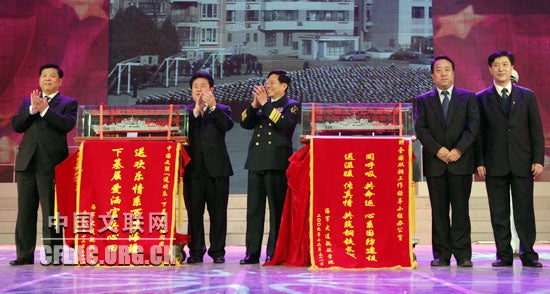 A PLA officer is present at the launch of the Zhongshan Naval Exhibit in Dalian, China. The exhibit with PLAN sponsorship was launched to help promote a real estate project. The aircraft and warship models, including CV-18, are afterwards expected to be permanently installed in a PLAN museum.

Discussions on Chinese sites explore how the CV-18 could be launched in the mid 2020s, assuming its predecessor, CV-17, is launched in the 2017-2019 timeframe. Going by the construction of other similarly sized aircraft carriers, the construction of the CV-18 would take 5-8 years, from the cutting of the first steel to completing the electronics and catapult outfitting.

When taken with other reports on Chinese naval construction, the models on display at the exhibit reinforce the idea that China could have game-changing naval capabilities by the mid-2020s.

Thanks to Stephen Miles, a.k.a. Desperado6 at China Defense Forum, for determining at which naval exhibit the CV-18 model was shown.