This Estonian Tankette Is A Modular Body For War Robots 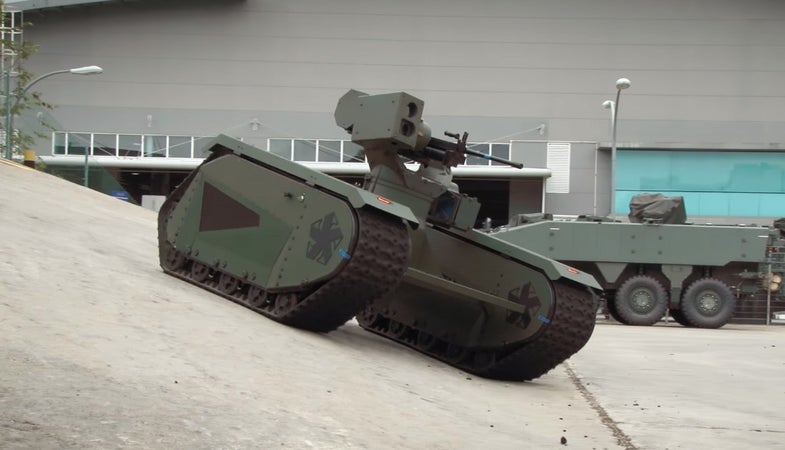 When robots go to war, they will be short, squat, and in bodies unlike those of humans. Estonian company Milrem’s new ground robot has no gleaming silver skull, no pointy battledroid face, and no blinking Cylon eyes. Instead, Mirem’s Tracked Hybrid Modular Infantry System (or THeMIS), which debuted at this year’s Singapore Air Show, is a simple green platform on tracks.

THeMIS boasts a top speed of almost 22 mph. It is is 6.5 feet n length, and just under 3 feet in height. This lets it keep a much lower profile than human soldiers. It weighs 1,500 pounds, and can carry a 1,500-pound payload on top of that. The “hybrid” part of the name comes from THeMIS’s diesel-electric engine and battery. It can run on just electrical power, or it can use gas and battery for up to 8 hours straight. It’s also modular, so the same robot body can carry cargo, use a robot explosive ordnance disposal arm, or just carry a big freaking gun.

Other options, advertised in a colorful pinwheel of options, list it as a drone launcher, an anti-tank missile launcher, a firefighting tool, a stretcher carrier for medevac, and a communication relay, among others. An unmanned ground vehicle, it can be remotely piloted, has “follow mode” where it travels behind a specific person, or be somewhat autonomous.