The most exciting entertainment innovations of 2022

A film that takes you inside Navy fighter jets, a projector that can display on the ceiling, and a super-bright gaming monitor are the Best of What’s New. 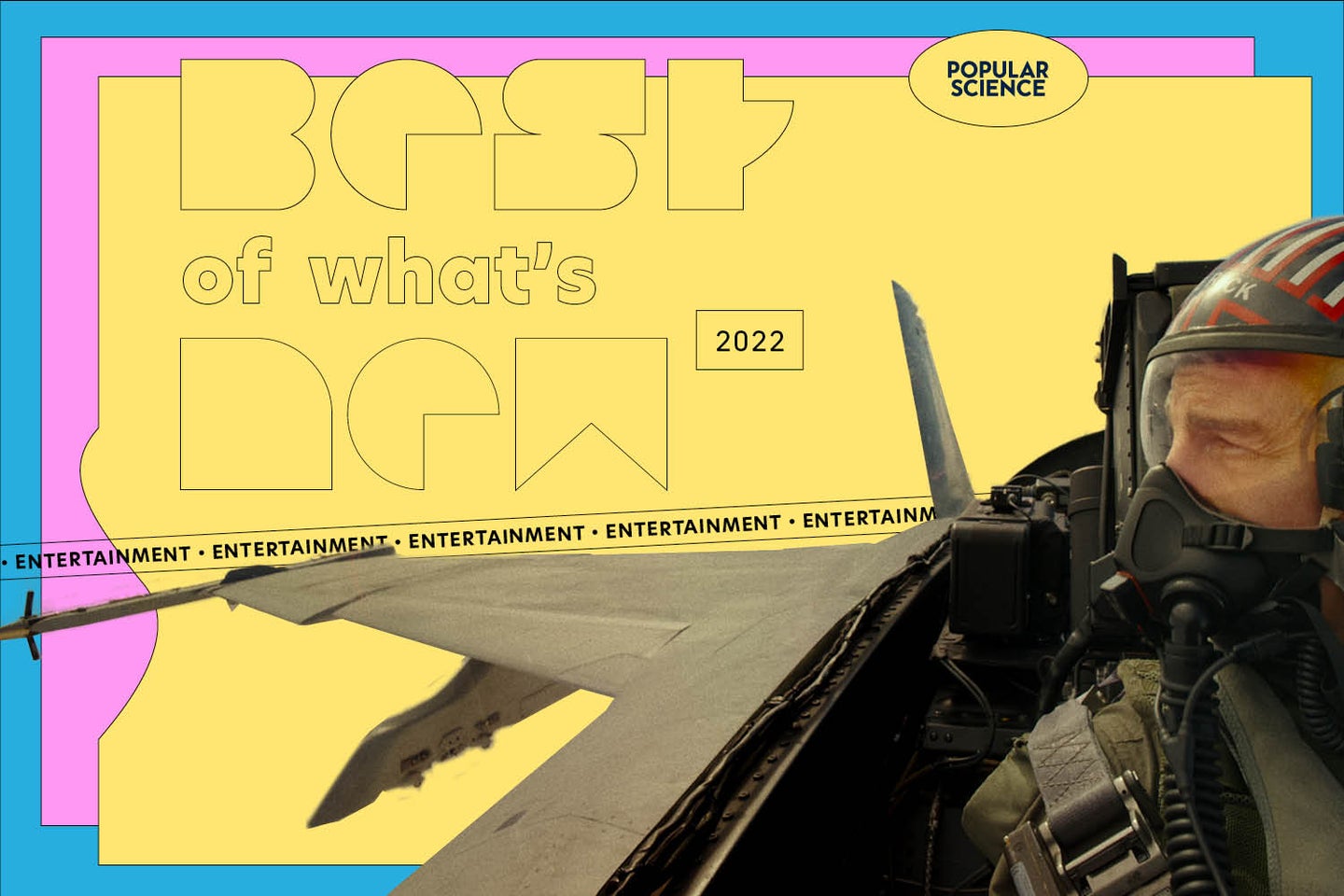 The entertainment category for Best of What’s New used to primarily contain devices meant for consuming content. But that’s changed. While our Grand Award Winner goes to a big-budget movie this year, you’ll find an increasing number of devices meant for actually making content. Self-flying drones, all-encompassing camera rigs, and even high-end monitors give people the opportunity to make their own content rather than simply consuming it. Other items on this list—primarily the earbuds—provide a reminder that content is a constant part of our lives. We’ve changed the content we consume for entertainment, but more than that, we’ve changed the way we interact with it. And these gadgets help shape that relationship.

Looking for the complete list of 100 winners? Find it here.

We’re all too used to watching computer-generated action sequences in movies. When Hulk smashes up the scene or aliens attack a city, we know it’s fake. The sequel to Top Gun, which arrived in May—36 years after the original—did it differently. Actors trained in real aircraft to prepare to climb into Navy F/A-18F Super Hornets, and when they did, they experienced crushing G forces as the jets maneuvered at speeds that ranged from about 250 mph to more than 400. To film it, the studio turned to custom cameras carefully mounted within the cockpits, and other aircraft like the L-39 CineJet shot while airborne, too. That approach, plus scenes shot on both the USS Theodore Roosevelt and USS Abraham Lincoln aircraft carriers, all add up to give the film a degree of excitement and verisimilitude that’s rare. While the film is still a product of Hollywood that made some use of CGI, and doubles as a recruiting vehicle for the Navy, we still salute its commitment to capturing the thrill and speed of Naval aviation.

Freestyle Projector by Samsung: An advanced projector that handles its own setup process

Samsung’s Freestyle fixes one of our biggest complaints with projectors: that moving them to find the perfect angle is a pain. The floating, tube-shaped all-in-one projector is attached to its frame on a pair of hinges, which lets it be tilted up or down with very little force. The Freestyle can be twisted a full 180 degrees, allowing it to be pointed forward for a traditional viewing experience, or vertically to play games on your ceiling. You can use your phone to enable “smart calibration,” which adjusts its brightness and color settings based on the color of your walls and the room’s lighting conditions. The Freestyle’s fun form factor and smart settings are complemented by impressive hardware features, like native 1080p resolution, stereo speakers, and an HDMI port for connecting external devices. There’s also a USB-C port in case you’d like to connect the Freestyle to a high-capacity power bank to take it on the go.

A couple of years ago, Samsung imagined a creative way to make use of a large, borderless, high-resolution screen when you’re not using it to watch videos or play games: displaying famous artwork on your wall. The problem was the TV’s LCD panel, which reflected light and made older paintings look like they were displayed on a screen rather than a canvas. That changes with the second-generation Frame, which has an anti-reflective matte display. Despite the change in technologies, Samsung says you’ll still be able to see a billion colors on the screen, and that it’ll continue to automatically adjust its color balance based on your brightness preferences. If you can’t justify the cost of an original Rembrandt, Samsung’s new Frame will be the next best thing.

Linkbuds by Sony: Earbuds that mix your audio with the real world

Sony created its LinkBuds to be the antithesis of noise-canceling headphones. They let outside sound in so you never need to take them out. The buds have a hard-shelled body, which means they won’t create a tight seal around your ear, and boast a circular cutout, which Sony calls an open ring. The ring gives LinkBuds their unique look, and is also where the earbuds’ driver is located. Sound is fed from the ring through the bud into your ear, along with some noise from the outside world. You’ll hear cars honking, airplane engines, and people on the street. But if you’re a runner who wants to hear a vehicle approach, this is a feature, not a bug.

QC II earbuds by Bose: Active noise cancellation that works across every frequency

Typical noise-canceling headphones have trouble blocking out sound in the middle frequencies between roughly 120Hz and 400Hz. That allows sounds like voices to occasionally get through. Bose has totally reconfigured its noise-canceling algorithm and hardware setup in order to fill in that ANC gap without creating uncomfortable ear pressure or compromising audio quality. The company adjusted its noise cancellation and tuning to a user’s body by measuring the way a chime reflects off the inside of your ears back to the earbuds’ microphones. The attention to detail paid off, as outside noises are greatly reduced even if you’re not listening to music. Bose offers three listening modes by default, but you can create custom ones using the company’s app if you’d like to crank active noise cancellation all the way up, or mellow it out.

Ronin 4D by DJI: An all-encompassing cinema rig and steadicam for creators on a budget

DJI’s Ronin 4D rig looks like a futuristic weapon pulled from a Star Wars flick. In reality, it’s a full-featured cinema rig that combines a number of essential movie-making tools into one compact and extremely stable camera rig. The modular system includes DJI’s flagship Zenmuse camera, which can capture 6K raw video at up to 60 fps or 4K video at up to 120 fps. It also boasts a full-frame sensor and interchangeable camera mounts. The whole imaging rig sits on a 4-axis gimbal that stabilizes footage so convincingly that it sometimes looks like it was shot on a dolly or a crane. Because the whole system is modular, you can swap parts like monitors, storage devices, batteries, and audio gear on the fly and customize it for your shooting needs.

OLED monitors typically provide unmatched contrast, image quality, and color reproduction, but they lack brightness. Quantum dot (or QLED) displays crank up the illumination, but lose some of the overall image impact found on an OLED. Enter QD-OLED. Like a typical OLED display, each pixel provides its own backlight. But the addition of quantum dots adds even more illumination, giving it a total peak brightness of 1,000 lumens while maintaining the certified HDR black levels to create ridiculous levels of contrast. And with its 175Hz native refresh rate, and super-fast 0.1-second response time, you can’t blame this pro-grade gaming monitor if you’re always getting eliminated mid-game.

Arctis Nova Pro Headset for Xbox by SteelSeries: A gaming headset that works across all of your machines

Gaming headsets typically require players to pick a platform for compatibility when you buy them. Some work with a console as well as a PC, but SteelSeries has given its Arctis Nova Pro headset the hardware it needs to work with Xbox, PS5, PC, and even the Nintendo Switch—all at the press of a button. Its secret lies in the GameDAC (short for digital audio converter), which connects to multiple systems and pumps out high-res certified sound with 360-degree spatial audio from whatever source you choose. Plush ear cups and a flexible suspension band ensure comfort, even during long, multi-platform gaming sessions.

Skydio 2+ drone by Skydio: A drone that follows commands or flies itself

Crashing a drone is bad for your footage—and your budget. But this high-end flying machine avoids obstacles with an advanced system that adjusts more than 500 times per second to prevent disaster. A fish-eye lens allows the drone to see 360 degrees around the craft. A dual-core Nvidia chipset generates a 3D-world model with more than 1 million data points per second to identify and avoid anything that might get in its way. With all those smarts, creatives can simply tell the drone to track them or program complex flight paths and the Skydio2+ will capture 4K video at 60 fps on its own. The drone also comes with more than 18 predetermined paths and programs that can make even basic action look worthy of a Mountain Dew commercial.

Dione soundbar by Devialet: True surround sound on a stick

Most soundbars allow buyers a chance to expand their audio system and add satellite speakers or at least a subwoofer. The Dione is different. It’s a totally stand-alone system that relies on nine 41mm drivers and eight built-in subwoofers in order to fulfill the entire sonic range you need to enjoy everything from high-pitched tire squeals to rumbling explosions. Thanks to its Dolby Atmos integration, it mimics a true 5.1.2 surround sound system. The sphere in the center of the bar contains one of the 41mm drivers; it rotates to allow the soundbar to achieve its spatial audio ambitions, whether it’s sitting on a TV stand or mounted somewhere around the television. Devialet’s Speaker Active Matching technology watches over the entire array to make sure none of the individual drivers surpass their optimal operating frequencies, and it even has a dynamic EQ mode that brings up dialog—so you can finally turn off the closed captioning and still understand what the actors are saying.