The best entertainment tech of 2020 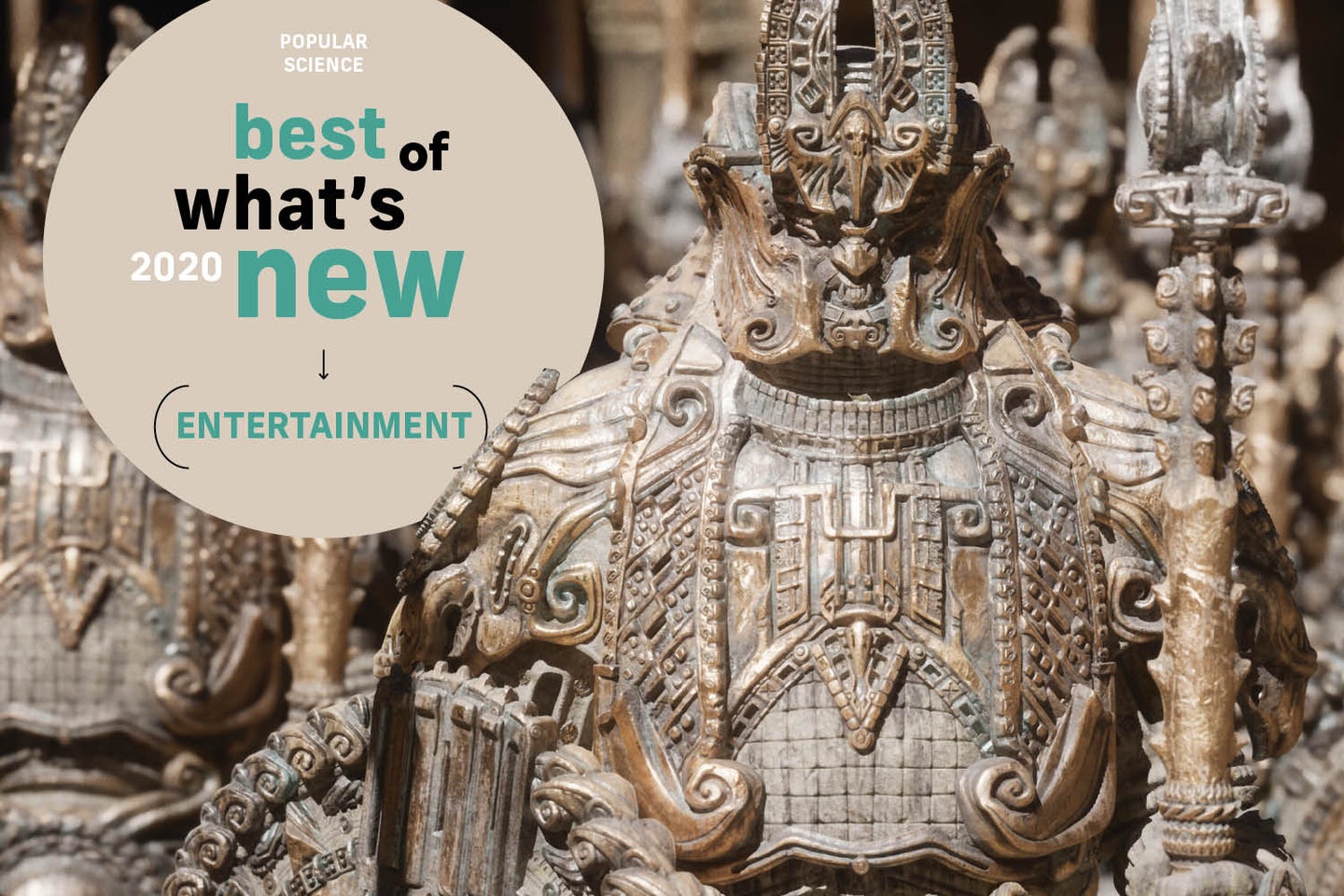 The year's most important developments in the world of entertainment. Epic
SHARE

No time in history has been better for getting lost in a virtual world, and we’ve found the best new products to help you escape. This year brings a new fleet of headphones that perfectly block out the noise around us, consoles that dish out colorful landscapes, and new ways to make content of our own to share. It will be a few years before game platforms get another refresh, which means we have a lot to look forward to as developers figure out the possibilities of new hardware and the software engines that drive them. Here’s to staying in because it’s fun—not just because we have to.

Console games feel different with Sony’s DualSense PS5 controller. It replaces the clunky rumble of previous generations with a targeted haptic feedback system made up of tiny, strategically-placed vibrating actuators. Along with its surprisingly powerful onboard speaker, the DualSense’s tremors can convey complex in-game concepts—close your eyes and you can still tell the difference between walking through crunchy gravel or padding across a sturdy castle floor. The shaking can telegraph a subtle light breeze or vibrate vigorously enough to make you spill your drink during a horror game jump-scare. The controller’s triggers, which automatically adapt their tension depending on your on-screen activities, add to the immersiveness of the experience; pulling back a bow before firing an arrow, for example, requires increasing pressure, just as it would in the real world. All told, it’s an extremely realistic experience with zero learning curve.

Creating a top-tier video game has always been a difficult feat, but now titles have to work across console, PC, and even mobile platforms—all of which have their own specific challenges—to truly compete. Epic’s Unreal Engine 5 offers a set of development tools that simplify the process of making in-game visuals. Typically, coders need to upload multiple versions of any virtual objects, which load one by one as you get closer or farther away, or play at different resolutions. Unreal Engine 5 can take source material like CAD data or a 3D model and render those objects in real time after just one upload. From a player standpoint, that means no more choppy, slow-loading environments, and more realistic lighting effects that integrate convincing reflections and highlights. The engine goes well beyond games, too: GMC has already tapped UE5 to develop the infotainment system in its upcoming electric Hummer.

A case that helps your phone stay chill

It’s easy to forget just how much computing power is crammed into our increasingly thinner smartphones. High-performance games and data-packed apps tax that hardware, which generates enough heat to cause the whole system to slow down. Razer’s Arctech cases employ a proprietary material called Thermaphene that draws heat out from the back of the device and vents it through small perforations in the back of the case. How much cooling it does depends on your phone and usage, but even a few degrees is enough to prevent performance stutters and save battery life.

When turned off, this display looks like a 5.7-millimeter-thick sheet of glass. In reality, it’s a transparent OLED screen that makes content look almost as if it’s floating in mid-air. Each individual pixel is a diode that provides its own illumination, so the screen doesn’t need a backlight. Xiaomi has also jettisoned the reflective cathode layer that would normally make the screen opaque, even when there’s no image. Other companies like LG have been working on similar technologies, but Xioami was the first to bring it to the consumer market in China during 2020.

A soundbar for all reasons

There are 18 total speakers inside Vizio’s 48-inch anodized aluminum Elevate soundbar. In addition to 14 stationary drivers in the center, the outer speakers rotate at the ends of the perforated case in order to direct sound right where you need it without the need for extra devices strewn about your living room. Throw on some music and the moving speakers spin forward to create a wider soundstage; put on a movie or TV show with Dolby Atmos or DTS:X surround sound audio, and they automatically fire toward the ceiling to create convincing directional audio.

Make any room a virtual racetrack

In 2020, our living rooms officially became Mario Kart tracks. Nintendo’s augmented reality game includes an actual camera-equipped kart that syncs up to a Nintendo Switch via Bluetooth to turn real-world objects into in-game obstacles. When another racer hits you with a shell, the 8-inch long by 4-inch wide vehicle in the physical world will go careening across the floor accordingly. You can bring your Switch and kart to a friend’s house and try your skills at navigating around their furniture. It’s one of the most intuitive and fun implementations of augmented reality we’ve seen so far.

If you want a snug in-ear headphone fit, you can cram your auditory canals full of foam or shell out big money for a custom set that requires a trip to an audiologist for molding. Ultimate Ears Fits simplify the process. Just work the soft polymer tips into your ears, and press a button on the companion app to turn on an LED array on each bud. The light cures and hardens the material in a way like making a dental implant. After two minutes, the tips will retain their exact shape for good, and fit snugly every time you put them in.

A professional streaming studio in your pocket

The pandemic forced people to stay home, and many looked to live streaming as a way to keep some form of human contact. In fact, the entire live streaming market grew almost 100 percent compared to 2019. Roland’s Go: Livecast plugs directly into a smartphone and provides all the essential functionality of a mixing board you’d find in a studio. Streamers can hook up a dedicated XLR microphone, add visual effects, and control audio levels while sending video to all the major streaming platforms. It even has a built-in mic, allowing the device to replace a whole studio full of pricy gear while keeping up your production value.

The best of both virtual realities

VR rigs typically demand that users choose between portability and power, as most mobile headsets can’t run the most demanding games and applications. The Oculus Quest 2 is a full-fledged portable setup with increased resolution, upgraded controllers, and improved fit, and it’s also the first generation of headset to officially support the Oculus Link platform. This allows you to plug it into a PC to run titles like Half-Life: Alyx that require serious processing power, providing all the convenience of a portable rig without sacrificing high-powered VR gaming at home. It works well enough that Facebook is discontinuing its tethered Rift S headset completely, leaving the Quest 2 as its only VR hardware.

Fly the galaxy on any platform

Before now, there hasn’t been a video game that could bridge the VR-console gap. Star Wars: Squadrons is a team-based aerial combat sim available for all the major consoles, as well as PC and VR. Crossplay is enabled by default, so you can build your squad with players from across all types of devices. And while it truly shines in VR, the game is still plenty awesome for friends playing with controllers or keyboards. EA set the price at just $39.99 at release, with no incoming downloadable content to nickel-and-dime you for in-game purchases.

Loading screens can kill a great gaming experience, and Microsoft did everything in its power to get rid of them in the Xbox Series X. Its hardware specs are stacked, offering a custom-built system on a chip from AMD, and a rebuilt software architecture called Velocity, designed to minimize latency at every step of the process—from the controller to the picture appearing on screen. The real speed, however, comes from the custom non-volatile memory express SSD storage, which can read and write dozens of times faster than a spinning hard drive.

The right idea for smartphone streaming

Quibi came into 2020 with an impressive level of hype. The service had raised—and spent—billions of dollars to create a smartphone-only streaming platform. The service is already dead, but its underlying tech was undeniably cool. Turnstyle allowed viewers to rotate their phone as they watched shows to see a picture optimized for either vertical or horizontal orientations. It allowed content creators to shoot their footage with two distinct looks, which viewers could seamlessly switch with the flick of a wrist. It worked wonderfully, and gave creatives a new method of visual expression. If only people had tuned in.