FYI: Do We Really Get Cold Feet When We Have The Jitters?

Turns out the phrase "cold feet" actually has some, erm, scientific footing. 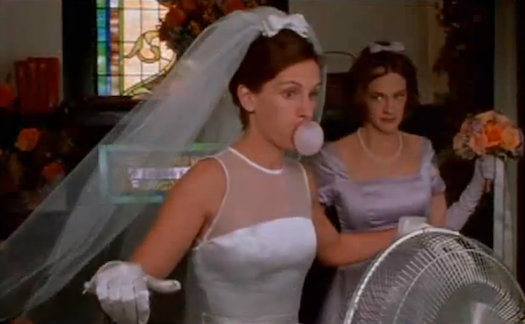 We all remember Julia Roberts in Runaway Bride and Matthew McConaughey in The Wedding Planner. Their stories may vary slightly, but they have one thing in common (well, besides the standard romantic comedy clichés): both characters had cold feet before their wedding.

We’ve all heard the term “cold feet” before. Maybe we’ve even experienced it ourselves. It’s when we decide – usually at the very last minute – that we cannot go through with a major life change. There’s stress, panic and often anxiety. Do our feet literally get cooler under these situations?

Our bodies regulate our reactions to stress by modifying body temperature. Internal body temperature is based on the role of the proteins and blood in each individual cell. Within each single cell of our body (whether that cell is in our feet or in our brain) is a Rap1A protein. When the brain signals a reactor in our cell, that protein activates and shifts from one area of the cell to another.

In June 2012, a team of scientists from the Research Institute at Nationwide Children’s Hospital identified this interaction between the protein molecules and the receptors as the main biological cause of icy extremities.

“When we exposed the cells with chemicals that activated the Rap1A with a receptor, we found a shift in the cell’s nucleus and a change in the cell’s skeleton,” says Dr. Maqsood Chotani, a principal investigator at the hospital. “We identified this receptor as the alpha-2C receptor and have found that it responds at times of stress to conserve body heat.

“So when people are stressed, their brain will release stress hormones to specific cells in the body, which have the potential to activate the a2c receptor,” Chotani says.

When the brain signals these receptors and shifts the proteins, the structure of the cells changes. The body reacts to this potential attack by then transporting blood from the extremities, like hands and feet, to vital organs like the brain, lungs and heart.

“The body reaction to stress aims to maximize our chances to survive in the face of such threats,” Michel says. “Our heart beats faster and our circulating blood is redistributed to those parts of the body which acutely need it most such as the heart and skeletal muscle. This is at the expense of other body parts such as gut and skin, which are less critical to the acute stress reactions of flight, fight and fright.” The decrease in internal temperature in the hands and feet shifts the blood distribution and makes the skin cool and clammy.

So those cold feet that you feel before an impending decision are just your body’s natural way of protecting you from possible harm. The common pre-wedding jitter expression actually has some scientific footing.

Ask Us Anything
FYIs