A new champion amongst solar-powered cars has emerged in sunny Australia: A student-built solar car, christened the Sunswift IV, has... 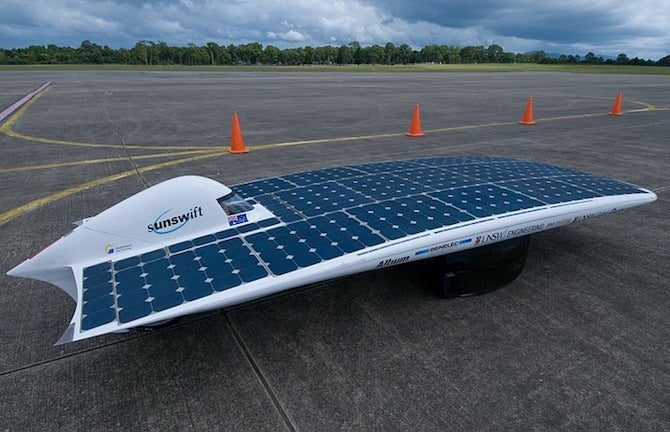 A new champion amongst solar-powered cars has emerged in sunny Australia: A student-built solar car, christened the Sunswift IV, has crushed the previous speed record with a run that topped out at 56.85 mph.

Built by students at the University of New South Wales, the Sunswift IV (known as IVy, though the pronunciation is a mystery (“four-y”? “ivy”?)) was designed specifically to break the existing speed record of 49.09 mph, set by the GM Sunraycer way back in 1987. That required removing the IVy’s 55-pound battery that’s typically included to assist with longer trips, which threw off the car’s balance a bit. But the reduced weight apparently helped, since the car managed an average of 55.14 mph in two trips (going in opposite directions) on a 2,500-meter track.

The record is peculiar because it can only be awarded to cars powered solely by the sun–no batteries can be involved (unlike some solar powerhouses), which is why the previous record stood so long (and why the actual speeds are not that fast). It also means that the cars themselves have to be ridiculously energy-efficient–even the Sunswift team admits that only a “very small person” can fit into the cockpit of the IVy.

This video shows the IVy in action–it’s pretty amazing to see just how small the cockpit is, as well as how light the car must be to go so fast on nothing but solar power.

The IVy is eventually due for the World Solar Challenge this October, where the team hopes to go even faster: Apparently, on the day the record was broken, the skies were mostly cloudy, so the team has a lot of confidence that they’ll be able to raise the record again when racing in full sunlight.