The Modular Robots Are Coming, One Toy At A Time

It’s fitting that the first real-world deployment of modular robotics—smaller bots that combine to form larger ones—came from a company... 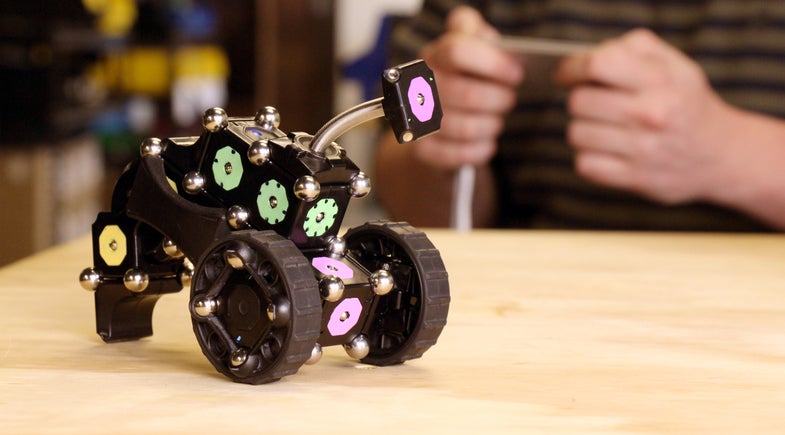 It’s fitting that the first real-world deployment of modular robotics—smaller bots that combine to form larger ones—came from a company called Modular Robotics. “We stole the name of the academic field for our company,” says CEO and design director Eric Schweikardt. “And I don’t feel bad about that in the slightest.”

As Schweikardt points out, decades of papers about the mind-boggling potential of robots that could be mixed, matched, and adapted to a range of tasks and environments have all featured the same sad finale, with researchers unable to come up with an actual, near-term application for the systems they’ve described or designed. You may have heard, for example, of MIT’s self-assembling modular bots, which were announced last month. But those machines, like so many robots, were born and bred for research, with no utility outside of the lab. So along with co-opting the name of an entire field of robotics, the Boulder, Colorado-based company upped the ante, and actually produced some modular bots.

Those inaugural systems, released in 2011, were Cubelets, a series of blocks with a range of processors, sensors and actuators. As commercial debuts go, Cubelets were exciting, demonstrating how an assemblage of bots could be reassembled and repurposed on the fly. But they were also extremely humble, and easy to dismiss: the snapped-together creations weren’t particularly impressive or capable toys. They wriggled away from heat or flashed in mock alarm when picked up, the kinds of behaviors that lose their thrill in seconds. The joy was in building, but the built results weren’t all that joyful.

Now comes Moss, Modular’s second attempt at building-block bots, announced this morning via Kickstarter. Though it will be months before the first units reach backers (or grabby journalists), these toys could be the real deal, commercial modular robots that pave the way for more powerful systems.

There’s a lot to like about the Moss design, such as the single connection for transferring data and power between blocks. But maybe the most potentially revolutionary element is the toys’ use of rare-earth magnets—positioned, for the most part, at the corners of cubes. Along with providing a tool-free method of attaching robots to one another, these neodymium magnetic balls can serve as joints, allowing pieces to hinge or swing freely. This is a minor stroke of genius, in part because it can lead to versatile structures, but also because robots are sadly fragile and almost suicidal things, prone to breaking their own components against their environments, or against themselves. If a Moss bot slams a complex, multi-hinged appendage against a chair leg, the limb might snap off. But reattaching it should be as simple as popping the magnet(s) back into position. And that’s one of the key advantages of the modular bot concept—it can fail or fall apart in degrees, without bricking the entire assembled bot. That quality feeds into the other unique benefit of this class of robots, which is the ability to reassign them, adding new mobility modes to handle new terrain (treads for urban streets, legs for the forest, etc.) as well as new shapes and sizes to tackle different roles.

Moss is a toy, but modular robots don’t have to be. And the lessons from engineering and producing this toy could lead to legions of adaptive of bots that have actual jobs. Though Modular Robots won’t discuss its own specific non-toy R&D efforts, Schweikardt believes that in the coming years modular bots could show up in a range of industries, such as manufacturing, as a versatile, customizable replacement for highly specialized single-mission robots.

For now, though, Moss is a modular toy, joining the growing ranks of surprisingly powerful and programmable toy robots, such as Romo, Sphero 2.0 and Anki. Moss bots, such as the Shogun Tank (the first of a planned series of artist-created sets) can be configured for direct, remote control over Bluetooth. More enterprising users can dive into the API, and adjust pre-loaded autonomous behaviors, such as driving around, avoiding obstacles, and firing a Nerf-style dart when it hears a double-clap, or create entirely new ones, such as counting walls in this environment to come up with a dynamic internal map. But that level of control means learning or at least fiddling around in C, a programming language that Schweikardt hopes to eventually dispense with. “I no longer believe that everyone should learn to program, says Schweikardt. He used to, because of the critical thinking skills it taught him. But struggling with code to try to access every function of every micro controller now seems tedious, and unrelated to what people really want to do with a robot: make it do cool things.

Eventually, Modular hopes to provide more intuitive programming options, including an approach called finite state machines—the specifics can get hairy, but it’s a computational model that allows for more abstract commands. Instead of plugging in ultra-precise values that make a bot patrol an area and fire at moving targets, specifying distance and elevation numbers for countless contingencies, the system would present its full range of capabilities, and let the programmer connect the dots: “Shoot anything that moves!”

Moss, like its fellow robot playthings, is pricey, with a relatively sad starter kit that costs $59, but more exciting kits (like the Shogun Tank) that run $299 and up. Those are Kickstarter pledge levels, but backers should be relatively secure in their investment—according to Schweikardt, the company is only using Kickstarter as a marketing tool (“That’s how you announce a product in 2013,”) and Modular has already sunk at least half a million dollars into production capacity for Moss. Though Kickstarter funders will get their bots first (in February), retail models will be close behind, with hopes of a wider, mainstream release in time for the 2014 holiday season. It’s safe to say that, unlike many hardware-based Kickstarted products, Moss will exist. And those who pick it up first aren’t just getting first crack at a swell robotic toy. They’ll be laying hands on one of robotics’ smartest ideas, before it reassembles itself into our collective lives.