To Create the Perfect Machine, Soldiers Build a Robot Out of Robots

Over at Fort Benning, soldiers at the Army Expeditionary Warrior Experiment aren’t waiting for military robot makers to come up... 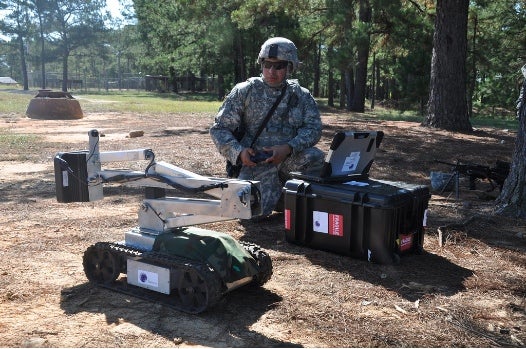 Over at Fort Benning, soldiers at the Army Expeditionary Warrior Experiment aren’t waiting for military robot makers to come up with the right mix of robotic capabilities. Putting that military penchant for improvisation into practice, soldiers there are mashing up their military robots to give themselves the capabilities they want, piggybacking one robot on top of the other until they get the right mix of gear.

Specifically, soldiers there mounted a TiaLinx Cougar 10 (that’s the robot that can hear your terrified breathing through a concrete wall via radio frequency sensors) on top of a faster and stronger Lockheed Martin Squad Mission Support System (SMSS), a load-bearing unmanned ground vehicle that went to Afghanistan recently for operational testing.

The DIY rig was designed by soldiers at Fort Benning to mitigate some problems they were having with the Cougar 10. While they love the ability to detect a human presence through a wall or obstacle, the Cougar 10 was too slow for teams of soldiers who were trying to quickly sweep and secure multiple buildings. The makeshift solution: piggyback the Cougar 10 aboard the SMSS, which is designed to move at speed and carry up to 600 pounds of payload.

Combined, the two ‘bots performed the mission the soldiers needed it to. But that doesn’t mean a Cougar 10/SMSS blend is a perfect robot by any means. The SMSS is large and loud, unfit for stealthy missions (during another night ambush exercise a SMSS packed with thermal imaging gave away a unit’s position with its engine noise). On the other hand, the Cougar 10 is designed to help soldiers get the drop on their enemies.

But for the mission at hand–sweeping and clearing a series of buildings–it was the right robot for the job. The fact that soldiers were able to quickly build their own customized robot out of robots is cool, both in terms of crafty DIY ingenuity and in terms of the future of modular military robot design.