Future Tanks Will Be Cooler, and Thus Invisible to Thermal Detection

Tanks are easy to see by day and, since they generate a lot of heat, they are also easy to... 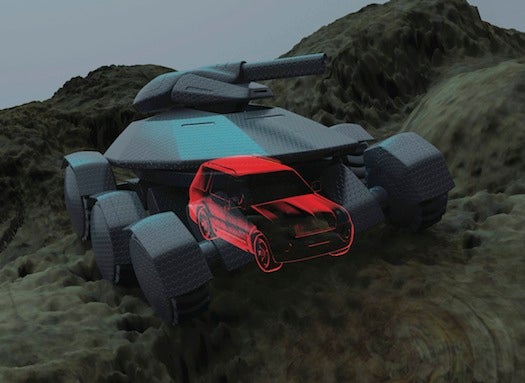 Tanks are easy to see by day and, since they generate a lot of heat, they are also easy to spot at night, at least for those equipped with infrared imaging equipment. In August, the British company BAE Systems unveiled its new Adaptiv system, which hides a tank’s heat signature beneath hundreds of electrothermal cells bolted to the vehicle’s exterior.

Infrared sensors detect the pattern of heat reflected by a tank’s immediate surroundings and, just as a processor guides pixels in a computer screen to form an image, adjust the temperature of individual cells to collectively form a heat signature that matches the environment. In infrared, the tank appears to disappear into the background. BAE says the system will be battle-ready in two years.

The Adaptiv system’s hundreds of 5.5-inch hexagonal cells are heated or cooled with electric current to create customized heat signatures. The system is dynamic, meaning a tank operator could match the vehicle’s heat signature to its surroundings when stationary but assume the signature of a preprogrammed object, such as a car or a cow, when moving. When friendly fire is a concern, operators could also exaggerate a tank’s signature to prevent confusion. BAE has already started testing its next generation of cells, which will include an undisclosed coating that can change color and brightness.

Engine exhaust may be too hot for Adaptiv to conceal completely. But borrowing techniques from stealth aircraft construction, tank manufacturers could incorporate broad and flat vents that produce ribbons of exhaust, which mix more rapidly with cool air. The vents would also be low to the ground so that exhaust would be disguised by the heat signature of the surrounding vegetation.

The Army has been testing hybrid engines in combat vehicles. In tanks, a silent electric engine could be flipped on for stealth combat missions.