It's a moment fraught with exquisite anticipation and dread–the moment when your car's true power is laid bare for all to see. 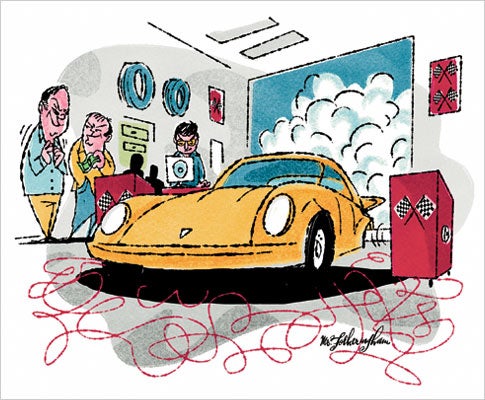 I need to find out, once and for all, how big it is. I need to see if I measure up to the other guys, if I have what it takes. And to do that, I’ll have to hang it out in public, let them size it up, in a very open display of the one quantity most important to the American car guy. Horsepower.

DeMan MotorSport, one of New York’s best Porsche racing shops, is a tiny facility behind a high chain-link fence on a side street in Nyack, a Hudson River town best known as the home of Rosie O’Donnell and lots of cutesy antiques stores. Not much bigger than a tennis court, DeMan MotorSport on a hot Saturday morning is jammed with 30 Porsches waiting for maintenance or modifications, race prep or resale–Porsches of every sort, from pleasant little 2-liter narrow-body early 911s to battle-scarred, decaled, waddle-ass track cars.

And today is Dyno Day. The deal is that 10 of us, all electronic acquaintances from an online Porsche bulletin board (pelicanparts.com), have put up $100 apiece to hire shop owner Rick DeMan’s dynamometer, a machine that will plumb the depths of our various Porsches’ horsepressures.

A dynamometer is not something you’ll come across down at the Toyota dealership or at the local we-fix-flats garage. It’s an expensive device that applies a load to a car’s drivetrain (in the case of a chassis dynamometer) or to a naked engine in a test cell (in the case of, yes, an engine dynamometer) in a way that allows the load to be measured and converted to a horsepower rating.

The classic chassis dyno is a big rotating steel drum, like a huge barrel lying on its side, located in a deep pit. The car is strapped down atop the drum so that the tires can turn it; the amount of time it takes the car to overcome the drum’s inertia and accelerate it to a variety of speeds can be converted to a horsepower curve. It works reasonably well but isn’t particularly good at sensing small variations in engine performance (the inertia of the big drum smoothes out the power curve), and it offers too many opportunities for variables, such as how tightly the car is tied down to the dyno.

Not to mention that if the car isn’t snugged down tightly enough, it can slip off the dyno, usually with the tires spinning at a simulated 150. This can launch a ‘Vette or a Viper through mechanics, bystanders, shop walls and perhaps the Wal-Mart next door.

DeMan’s dynamometer, however, is entirely different–a compact, portable, made-in-New Zealand, computerized rig called a Dynapack. It sells for $56,000, and even more for the 4-wheel-drive version. “For $100 each, you guys are getting a bargain,” DeMan says with a laugh.

Two boxes, each the size of a dorm-room mini-fridge, straddle the car, which has had its drive wheels removed so that splined extensions can be bolted to the hub studs. The splines mate smoothly with receptacles in each of the boxes, called power-absorption units, and the car sits with its rear end suspended in midair, held aloft by the two PAUs.

When the car is accelerated–and we’re talking foot feed to the floorboard, not some wussy EPA city-driving cycle–the extension shafts spin hydraulic pumps. The engine applies a maximal load to the pair of pumps, and by measuring the hydraulic pressure versus rpm, the computer graphs the amount of work being performed per unit time. Which is another way of saying horsepower.

But enough of physics class. How are they hanging on Dyno Day?

The group waiting with their cars for turns at the dyno ranges from an overweight, greasy-haired kid with more body studs, knobs and piercings than a used voodoo doll, to a perfect preppie in Bermudas, a pastel-yellow polo shirt and sockless shoes.

Ah, yes, here’s a hold-harmless waiver I have to sign that says if my engine blows up, I won’t sue DeMan. “The potential risks of running an automobile on a dynamometer have been explained to me,” the waiver reads. Well, actually they haven’t. Hey, Rick, what exactly are the risks? “If your car is in great shape, there are none,” he says. “We’re going to load it to the max, at the redline, for six or seven seconds. The biggest risk of all is that you find you’re making less horsepower than you thought you were, and now you want to spend lots of money to get more.”

Maybe so, but I do notice that DeMan asks us to stand clear of the shrapnel zone before he takes each car through the first of its three runs. “181 . . . 179 . . . 177 . . .” His assistant sings out the horsepower readings from his station at the computer monitor as he watches the arc of each power curve. It is a very public proclamation of rank and bragging rights.

A chassis dyno reads horsepower at the wheels, and results have to be mathematically converted to get the engine’s real numbers. When Chevy advertises that a Corvette has 390 hp, the company is not talking about what ripples the pavement but what comes off the crankshaft. A car loses a little bit of power through every step of the drivetrain–clutch, transmission, driveshaft, universal joints, differential, axles, CV joints and the squirming rubber of the tires.

A front-engine, rear-drive Porsche–a 924, 928, 944–wastes fully 25 percent of what the pistons produce before the Pirellis hit the pavement. A rear-engine, rear-drive 911, however, loses only 15 percent, because of its compact power unit. (Another bit of evidence that Ferdinand Porsche knew what he was doing when he combined the entire powerplant into a well-contained whole.)

I’m scheduled last, and I’m hoping everybody will have gone home by then. No such luck. People crowd around to peer at the funny-looking things on top of the engine of my modified ’83 911SC. “Carburetors,” I tell them. DeMan climbs in and asks what the redline is. “Seventy-five hundred,” I say, which is 1,000 turns higher than a stock 911, “but I’ve never taken it that high.” DeMan decides 7,200 is plenty.

It’s over in a minute. Clutch out, the engine bogs briefly as the dyno’s hydraulic pump loads it up, and then three times the little Porsche screams to its peak. Nothing blows up. “232.7, 233, 234.6.” Good lord, I’m putting out 276 hp at the crank, after calculating in the requisite 15 percent. That’s six better than my fondest hope, and the graphs that DeMan prints out show that with some adroit tuning and carburetor rejetting, there’s more lurking somewhere inside this old beast.

Several months later, I show up on DeMan’s doorstep with a baggie of various main, air and idle jets. After a morning of fiddling and further dyno runs, he signs my little motor off
with 290 hp at 6,100 rpm. It may not be much compared to 400-hp SVT Mustangs and 500-hp Vipers, but for a 20-year-old, 2,500-pound car, it’s plenty. I drive home happy in the knowledge that I’m Big Enough.