Don't let the old-fashioned lines of this beauty fool you: Half a million buys you a boat that's tech-packed and joystick-steered. 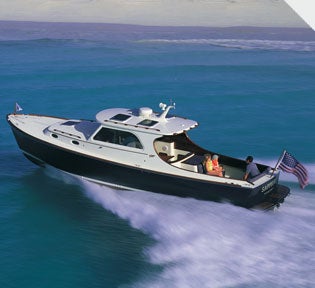 Many modern powerboats, to my landlubberly eye, have all the style and grace of a Motel 6 plastic bath/shower unit, with which they have much in common in terms of construction. A classy, superexpensive exception is a motorboat made by the small Maine company Hinckley. It is a 36-footer known simply, in a world of boats named after killer fish, as the Picnic Boat.

The Picnic Boat has become the ultimate rich boater’s toy, in part because of the tastefulness of its traditional Maine-lobster-boat lines, in part because of some surprisingly sophisticated technology that’s hidden within it, and not incidentally because of its astronomic price: It starts at $480,000 and hikes to $520,000 if you want all the options and custom details. All this for a day boat that sleeps two. That makes it, per foot of length, the most expensive semi-production pleasure boat you can buy.

Lots of powerboats are at best floating Corvettes and Vipers, at worst plastic-clad Pontiacs of the sea. If the Picnic Boat were a car, it would be a 1960 Ferrari 250 GT Berlinetta Lusso. Both have the same powerful but restrained swoop from stubby tail past clean flanks to a rising, massive, powerful nose. And both are shapes that were once so right yet today look, at least to some of us, appealingly archaic.

Hinckleys are built entirely by hand. They appear to be made of wood, for the hulls are usually painted a traditional dark yacht blue, and their
perfect gloss–it’s the same durable, expensive Awlgrip enamel used on airliners–is far shinier and more reflective than gel-coated fiberglass. The fact that there’s lots of teak
brightwork showing, and that Hinckley’s varnishing technique is something of a company secret, also abets the wooden-boat impression.

But a Picnic Boat’s hull is actually a rugged three-layer, high-tech sandwich: fiberglass and Kevlar on the outside, then a balsa or PVC core, and an inner layer of carbon fiber, manufactured using a method called SCRIMP (Seemann Composites Resin Infusion Molding Process).

The most basic way to build something of fiberglass is to spread layers of glass into a female mold, wet them with epoxy resin, and let the assemblage cure. When it’s dry, you pop it out of the mold. It’s durable but heavy, because lots of extra resin is needed to make sure all the glass weaves are fully impregnated.

Or you can lay the glass–and, typically, carbon-fiber reinforcement if you go to this much trouble–into the mold wet, then cover it with plastic sheeting, seal the edges, and pump the air out, squeezing a lot of the excess resin out of the cloth and to the edges. Called vacuum-bagging, this method is better but not best.

SCRIMP means you put everything down dry–Kevlar, carbon fiber, fiberglass, core–and “bag” it dry, then pull a vacuum and inject an exact quantity of resin into the bag at various points. The vacuum sucks the resin throughout the layup, wetting the assemblage thoroughly but not to excess, and you end up with an extremely strong and light composite.

An ancillary benefit is that also trapped in the bag is much of the glue-sniffer aroma that fills a less sophisticated boat shop as workers stagger around with melting brains. Parts
of the Hinckley factory are scarily odiferous, to be sure, but nothing like what you’ll find in the warehouse
factories that dot the aromatic backstreets of Fort Lauderdale.

Brain-saving fabrication methods aside, the Picnic Boat’s most impressive technology is controlled by a big teak-knobbed, rubber-booted joystick just to the right of the captain’s articulated chair. (The chair itself is a U.S.-made Stidd unit originally designed for long-range military patrol boats, where coxswain comfort is important. Upholstered in white biz-jet leather as soft as Jell-O, each one costs Hinckley $8,000.) Though the Picnic Boat might look like it should go tump-tump-tump as it putts along at 6 knots from lobster pot to lobster pot, it in fact has a fully planing bottom, a 440-horsepower Yanmar straight-six diesel as big as a refrigerator, and a max speed of 28 knots (32 mph) via a pivoting New Zealand?built Hamilton jet drive controlled largely by that joystick. Today, New Zealanders are the world’s jet-drive go-to guys, but the waterjet concept was developed in Ohio, just before World War II, by the clever minds at a company that built launch-size fireboats. They figured that they already had a high-pressure pump aboard to spray water on fires, so why not also use it to shoot water out the back of the boat to get to the fire? The technology worked just fine, but after a run of small jet-drive fireboats was made for the Coast Guard during the war, the concept lay dormant until the ’90s, when it reappeared, mostly in big commercial craft and little jet skis. Hinckley was the pioneer in putting jet drives in midsize pleasure boats.

“The first Picnic Boat we built was a conventional prop-driven boat,” says Robert Hinckley, whose father founded Hinckley Yachts in 1928. “When we put the jet version in the water and started fooling around with it, we went, ?Whoa! This is the way to go.'”

The Picnic Boat’s controller, called the JetStick, works through a dedicated Rolls-Royce Marine computer. The controller manipulates the forward-and-reverse and side-to-side direction-controlling thrusts of the jet at the base of the boat’s transom in two ways: by shifting the “bucket” that diverts the high-pressure water stream to the front or rear, and by swiveling the jet itself from side to side like a conventional boat’s rudder.

In docking mode, the JetStick coordinates with the Picnic Boat’s bow thruster so the boat can be moved absolutely sideways. Think of the Picnic Boat as a car that can pull up next to a parallel-parking space, turn all four wheels 90 degrees, and slide in laterally.

There’s a substantial menu of JetStick capabilities. In docking mode, if you get confused–and many Picnic Boat buyers are wealthy novices–all you need to do is let go of the JetStick and the boat reverts to an instant “hover” setting, dead in the water with the power automatically balanced front and rear no matter where you’ve set the throttle (a separate control).

Funny thing: Hinckley was once a company that made superb sail and motor yachts for serious boaters; but the business has changed, and the

Picnic Boat is part of that change. “Twenty-five years ago, if you were a boater, boating was your life,” mused Hinckley’s vice president of sales, Edward Roberts. “When you came home from work on Friday, your wife had the boat stocked and ready to go for the weekend. Your Christmas presents were all boat-related. Boating was what you did. Today, the high-end powerboat is just one of many things vying for a person’s recreational time.”

Meaning that a number of owners are the kind of boater who puts total trust in a Picnic Boat’s big, completely automated, moving-map GPS display; uses a laminated, strictly not-for-navigation place mat copped from a Nantucket restaurant as the only chart; and may not have the faintest idea how to dock a pricey boat that won’t hover and go sideways.

“We have had two Picnic Boats go over the breakwater at Nantucket at high tide,” Bob Hinckley admits. “The boat has only 18 inches of draft, so drivers (tend to get) a little casual, but there’s only about six inches of water at that point. They bounced over, but the boat’s pretty forgiving. With a traditional boat, you’d have taken all the running gear off, but they used the boats until their vacations were over, then we fixed them.”

But hey, there’s a new generation of water rats coming along. A Hinckley employee told me that they’ve sold Picnic Boats to couples whose 12-year-olds drive them better than they do. To these kids the JetStick makes Picnicking just a 3-D videogame. All they need is blasters to get rid of those pesky submerged breakwaters.