How a Decade of IEDs Has Reshaped Bomb Disposal Tech 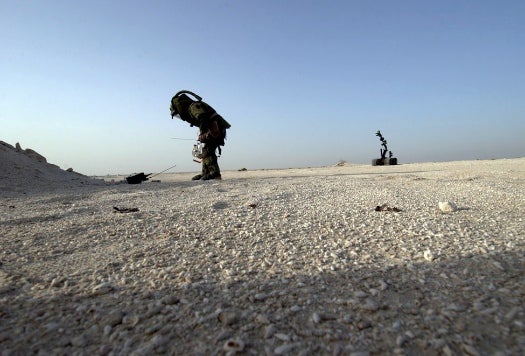 When American and coalition troops rolled into Afghanistan in 2001 and Iraq in 2003, they quickly began doing exactly what any military playbook said they should do, leveraging their superior firepower and aerial superiority into a string of quick victories. In both engagements, coalition forces quickly hammered conventional military threats into submission and settled into a long role of occupation and rebuilding. That’s when the bombs started going off.

Improvised explosive devices, or IEDs, were claiming casualties and leveling a battlefield that once sloped steeply in the coalition’s favor. The IED quickly emerged as the insurgency’s weapon of choice and the single biggest killer of U.S. troops. The military needed a new set of 21st-century tools to help stop the bleeding and mitigate the IED threat. And that’s exactly what it got.

On its two biggest fronts, the U.S. military and its allies found themselves battling an enemy unbound by normal conventions of war and unrelenting in its creativity. Insurgent fighters were turning just about anything–jerry cans, surplus artillery shells, even pressure cookers and other household appliances–into remotely detonated land mines capable of turning an unarmored Humvee into twisted, charred wreckage. The enemy didn’t even have to show up to the battle. By 2007 the “roadside bomb” was responsible for well more than half the coalition deaths in Iraq.

Military conflicts have historically served as effective technology accelerators as the threat of casualties drives military planners to solve problems as quickly as possible. In Iraq and Afghanistan over the past decade, the story is no different. Today, ten years after boots first hit the ground in Afghanistan, the military’s technological toolbox has been drastically transformed by the landscape of the last decade, shaped largely by the persistent IED threat. And perhaps no job in the U.S. military has been reshaped by technology quite like Explosive Ordnance Disposal (EOD).

These are the guys who make regular work out of dealing with a grunt’s worst nightmare: unseen explosives buried under footpaths and roadways and rubble, waiting to make unsuspecting victims out of a foot patrol or convoy. EOD technicians are first and foremost highly trained problems solvers, but ten years into the long war the technology at their disposal has become sharper, more reliable, and safer to deploy. That’s a good thing, because EOD teams in Afghanistan are still getting plenty of work.

Over the past several weeks, that new technological toolbox has been on display via G4 Network’s documentary series Bomb Patrol: Afghanistan, in which a camera crew rides shotgun with elite Navy EOD Platoon 342 as it hunts IEDs in Faryab and Kunduz Provinces in Afghanistan. To get a closer look at how the EOD toolbox has changed during the decade of the IED, we asked Chief Petty Officer John Groat (a Navy EOD tech and one of the subjects of the G4 series) and Richard Graves, the technical advisor for Navy EOD Group 2 at Joint Expeditionary Base Little Creek-Fort Story in Virginia, to walk us through the gear that Navy EOD techs take to work every day.

Some of it is fairly conventional, some of it extremely high tech, and much of it highly explosive. Click through the gallery to see what Navy EOD teams have learned from ten years of battling IEDs. And check out Bomb Patrol: Afghanistan Tuesday at 10 p.m. Eastern on G4. The season wraps up on December 27th.