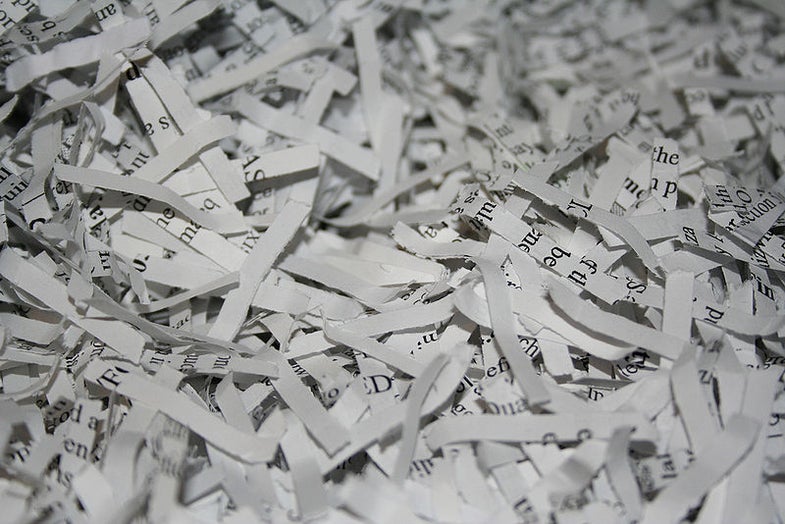 9,000 teams registered for the shot at $50,000, but it took one three-man team just 33 days to solve DARPA’s Shredder Challenge, a contest to read destroyed documents. San Francisco-based “All Your Shreds Are Belong to U.S.” took the prize two days before the close of the competition, exhibiting the ability to blend computer vision algorithms and human know-how to reconstruct five different documents that had been run through a paper shredder and converted to more than 10,000 total pieces of paper.

The Shredder Challenge was announced in late October, seeking teams with the technical expertise to reconstruct destroyed documents and extract information from them quickly. To prove they could do this effectively, teams not only had to reconstruct the five documents, but also to solve puzzles embedded in them. And they had just more than a month to do so.

The winning team–consisting of a mobile phone software developer, the creator of the smartphone translation tool Word Lens, and a satellite software expert from Lockheed Martin–completed the puzzles officially on Friday. While we don’t get to know the specifics on how they did so, we’re told their winning algorithm used computer vision to define things like the shapes of rips and marks on each piece of paper to help match it to others in the pile. And we know there was some degree of human interaction involved, though to what degree is unclear. What is clear is that shredding documents isn’t as safe a method of destroying sensitive info as it once was.

DARPA’s wants to give warfighters and intelligence operators the ability to quickly extract valuable information from documents recovered or confiscated in war zones and elsewhere, as well as to probe America’s document destruction protocols for weaknesses. Just 600 man-hours and $50,000 later, the agency is well on its way.