Manned surveillance missions are critical to obtaining useful intelligence. But sending a soldier into sensitive areas can often be too... 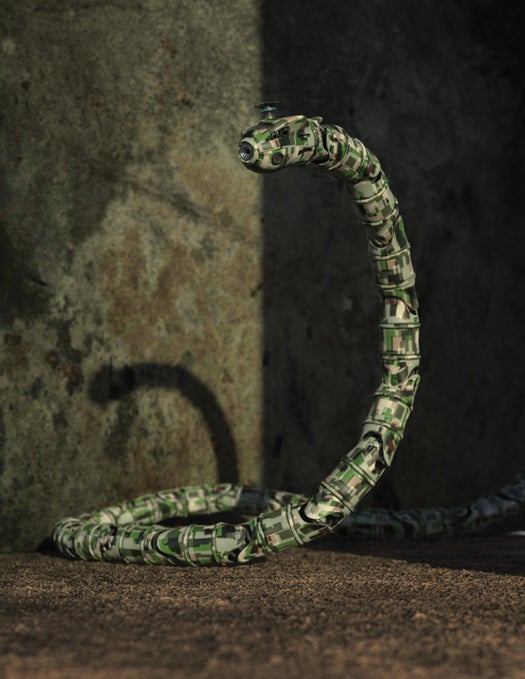 Manned surveillance missions are critical to obtaining useful intelligence. But sending a soldier into sensitive areas can often be too dangerous. Scientists are developing robots that could do the job. Last spring, the Advanced Technologies Laboratory at Lockheed Martin unveiled a prototype that uses sensors to model its environment, detect potential threats, calculate lines of sight, and locate good hiding places.

Next-generation surveillance robots will probably combine sensors similar to those on the prototype with more-powerful artificial intelligence and a stealthy body. One such device could be the snakebot, developed by a team at the Biorobotics and Biomechanics Lab at the Technion–Israel Institute of Technology. The robot could infiltrate sewage pipes, crawl under floorboards, or coil up and stand upright for a better view. It could even shed one of its segments, dropping off audio bugs or explosive warheads for assassination missions.

The six-foot snakebot (top) consists of polymer segments connected by flexible joints and is powered by electric motors. Movement control relies on software that determines the best mode of travel—wriggling, rolling, corkscrewing—for each situation. Sidewinding is fastest but requires good traction; inching forward by undulating the body is slower but works in confined spaces; rolling may be easiest on a flat surface. The snakebot can also rise up to climb stairs and other vertical obstacles.

The robot’s laser-radar cameras scan the environment to determine the distance to every reflecting surface in 360 degrees, generating a “point cloud” of readings. Software joins the dots, turning them into a 3-D model of the surroundings. From the model, the robot can determine a threat’s sight line, assess and navigate toward hiding spots, and steer clear of dangerously exposed areas.

A set of four directional microphones enables the robot to detect approaching humans. By comparing the time that sounds reach each mic, the robot can calculate a threat’s location, bearing and speed, and use that data to determine if it needs to hide.