Soft robotic fingers, robots that can open doors, and a robotic sea turtle--iRobot's R&D; guys stopped by to show us their latest projects yesterday, and we're passing the awesomeness on to you. 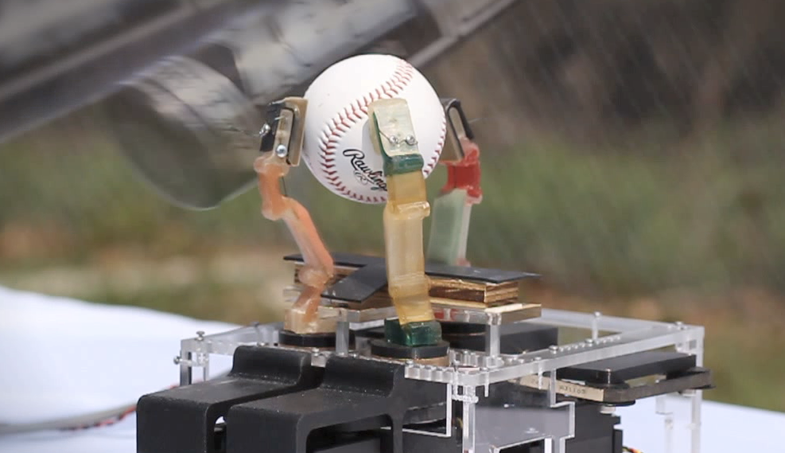 The nice folks at iRobot were kind enough to swing through our offices yesterday to demo some of the latest things coming out of their robotics research labs–which, from the look of things, must be a pretty amazing place to clock in every day. iRobot, if you’re unfamiliar, makes everything from the adorable little Roomba robots that putter around cleaning floors to the Packbots and Warrior robots that have helped military EOD teams disable improvised explosives devices in Iraq, Afghanistan, and beyond. They’re out at the front of the so-called robotics revolution, and so when they hand us a thumb drive full of brand new videos of robots we’ve never seen before, well, we just have to share them with you.

The sporting video above is a demonstration of something iRobot and others have been working on for a long time–robotic actuators that are both useful but also safe to use in human environments. The robots that will someday populate our homes and workplaces need to be able to manipulate the physical world around them but for obvious reasons we don’t want them to operate like heavy machinery, with powerful metal actuators and bone-crushing force. These soft robotic digits are one possible solution to the problem.

Another seemingly simple yet vexing problem for robots, particularly those that would operate in indoor environments (or from a military standpoint, in the increasingly urban environments where our warfighters find themselves), is the average door. Robots that can defuse bombs, negotiate tough terrain, and breach buildings by being thrown through windows or dropped from helicopters are often stymied by doors. Just regular, simple doors. Doors are notoriously difficult for robots to open and move through.

Above, you see a Packbot doing exactly that using what’s known as a jamming gripper. Jamming grippers are pretty smart little tools. They are basically latex balloons filled with some soft, granular medium–something with the consistency of coffee grounds. When the gripper is relaxed it can be pressed against just about any object, and the gripper will wrap around it. But use a pump to suck all of the air out of the balloon and suddenly the medium inside becomes rigid, firmly gripping whatever object is within its grasp.

If it looks like the Packbot above is struggling a little bit, keep in mind that this is a heavy, spring-loaded fire door–the most difficult door the iRobot team could find in the building, they said. Jammer-Packbot still gets it done.

Last but certainly not least is Transphibian, which we’ve included here because it’s a like a robot sea turtle, and what’s not to like about that?