If the Manhattan grid system was extended beyond the island, the Prime Minister of the United Kingdom would live at... 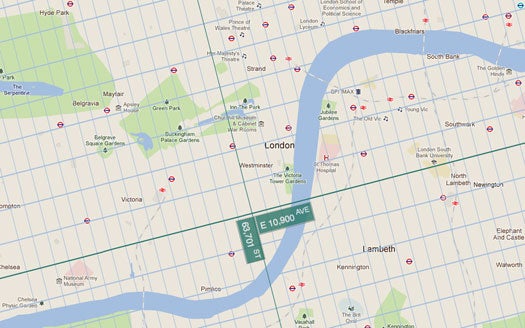 If the Manhattan grid system was extended beyond the island, the Prime Minister of the United Kingdom would live at the intersection of 63,709th Street and East 10,894th Avenue. A wild interactive map by Harold Cooper, called ExtendNY, imagines an entire globe laid out according to the New York City grid of the Commissioners’ Plan of 1811.

West of New York, the avenues continue past 12th Avenue. Chicago is near the intersection of 4,000th Avenue and South 4,000th Street. Avenues A and B in Eastern Manhattan are replaced with East 1st and 2nd Avenue. In Europe, the streets run North-South, and the avenues run East-West.

When viewed on a flat map, the tens of thousands of avenues and hundreds of thousands of streets swoop around, to match the spherical globe. Oddly enough, all the imaginary streets and avenues converge in eastern Uzbekistan (which we’ll just call bizarro-Manhattan), where 127,000th Street goes around in a small circle. 127,001st Street appears to just be a single point.

ExtendNY would certainly make maps more orderly, in addition to finally establishing New York as the rightful center of the world. The new streets would finally make order out of the West Village, too, and non-numerical avenues like Broadway would cease to exist.