Amid Privacy Fears, Police Across the Nation Will Roll Out Face-Recognizing iPhone Tech This Year

A controversial piece of facial recognition technology (and a PopSci “Best of What’s New 2010” alum) is rolling out in... 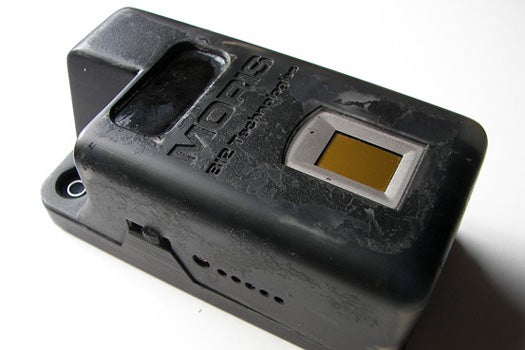 A controversial piece of facial recognition technology (and a PopSci “Best of What’s New 2010” alum) is rolling out in police stations across the country this fall, and naturally not everyone is happy about it. The Mobile Offender Recognition and Identification System (MORIS) uses an augmented iPhone to snap pictures of faces, scan fingerprints, and even to image irises, and then combs through police databases looking for matching identities. This, understandably, has privacy and civil liberties advocates crying foul.

The MORIS device attaches to the back of an iPhone, adding roughly 1.75 inches to the thickness of the smartphone. Police officers armed with the tool can take a photo of a person’s face from about five feet away, or scan his or her iris from about six inches, and wirelessly beam that data to law enforcement databases elsewhere to look for a match. It can also perform remote fingerprint matching.

Similar biometric technology has been deployed by the U.S. military in places like Iraq and Afghanistan to confirm the identities of civilians entering military safe zones and to search for known insurgents at checkpoints. But rolling it out in the streets of the U.S. has plenty of people concerned with privacy and Constitutional issues.

The technology lives in a somewhat gray area of the law. It’s generally permissible to take a photo of anyone in a public space, but when a law enforcement agent does so–and especially when he or she then cross references it against a criminal database–that could constitute a search, and therefore should require a warrant.

It’s another one of those situations where technology has simply outpaced the law ( you would think Ben Franklin of all people would’ve seen mobile facial recognition software coming). So while it would be nice to turn to legal precedent here, there simply is none.

Nonetheless, BI2 has deals with about 40 agencies nationwide to deliver about 1,000 of the devices starting in September. From a law enforcement standpoint, police officers seem to like it. It’s a technology that lets them get to the bottom of a situation quickly. Moreover, in the technology’s defense, it’s tough to use MORIS to abuse a person’s rights if an officer is not already in the process of abusing them.

In an interview with BI2’s chief executive Sean Mullin last year, he told PopSci that the responses of privacy groups and civil liberties advocates are entirely appropriate, but that he thinks the technology passes legal muster. The facial recognition technology requires a frontal facial image taken from close proximity, he says–in other words, it requires consent. Iris scans are practically impossible without the subject’s cooperation, as are fingerprint scans. Besides, the alternative when a police officer can’t confirm a suspect’s identity is generally a trip downtown to sort it out. MORIS simplifies that process.

Whether or not that’s enough to satisfy the privacy rights crowd–and the law–remains to be seen. How this kind of technology is treated by the law now will set the precedent for when the technology becomes more robust–and perhaps more long-range, more surreptitious, and potentially more “Big Brother.”