The World’s Smallest Stirling Engine is a Single Particle, Just Three Micrometers Across

At the University of Stuttgart and the nearby Max Planck Institute for Intelligent Systems, researchers are taking the notion of... 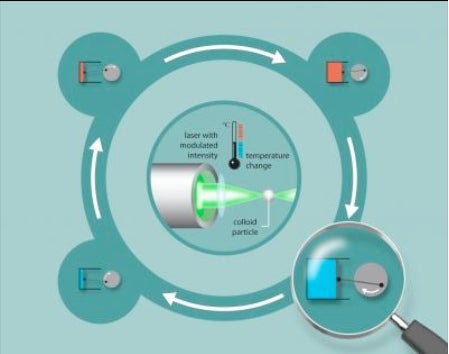 At the University of Stuttgart and the nearby Max Planck Institute for Intelligent Systems, researchers are taking the notion of smaller, more compact engines to a micro-machinery extreme. Their new power generator is a single particle–just 3 mircrometers wide–that functions like a Stirling engine to generate actual work.

A Stirling engine essentially works by heating and cooling a fixed volume of gas inside a cylinder, using the expansion and contraction of that gas to push a piston. The 200-year-old design is extremely efficient, though it never caught on quite like the more powerful internal combustion and steam engines did (though Segway inventor and all-around smart guy Dean Kamen is a big fan).

In their micro-scale analog, the researchers in Stuttgart have replaced the machinery of a Stirling engine with a microscopic bead of malamine (that’s like a plastic-ey, resin-ey compound used in all kinds of things like dry-erase boards and kitchen countertops) floating in water and a couple of lasers. The first laser confines the motion of the particle. A second laser quickly heats and, when switched off, quickly cools the water around the bead.

That heat builds up a kind of tension in this optical trap, agitating the particle and making it want to break out of the hold the first laser has on it. By manipulating the intensity of that first laser periodically, the researchers can give the bead more or less latitude to expend its pent up energy. This essentially mimics the compression and expansion strokes of a Stirling engine, creating work at a microscopic scale.

Of course, even the researchers who poured their time and energies into creating the world’s smallest Stirling engine aren’t quite sure what the practical applications are at this point. But, they point out, it’s a first step toward studying the balance of power and efficiency at the nanoscale, and could lead to designs for future micro-scale machinery.