Space debris could be nudged out of the way using a moderately sized Earth-based laser, a team of NASA researchers... 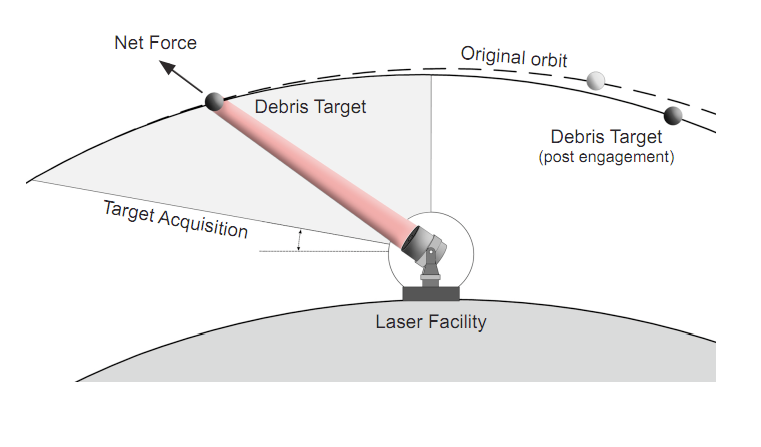 Space debris could be nudged out of the way using a moderately sized Earth-based laser, a team of NASA researchers suggests in a new paper. The laser wouldn’t blast the debris to smithereens, but combined with a ground-based telescope, it could be used to move space junk into a different orbit so it would not collide with other debris or important spacecraft.

Space debris has already threatened the International Space Station, and satellites are in harm’s way all the time. But most of the time, the station or satellite in question can be moved out of the way, letting the space junk continue on its orbital path. It’s easier to fire a couple thrusters than to throw out a giant space net, tether or solar sail.

The laser system would take the opposite tack, nudging space junk and letting satellites stay put. It would ideally be based near one of the Earth’s poles, and would use photon pressure to disturb an object’s orbit, according to James Mason and colleagues at NASA’s Ames Research Center. Photons would target the debris every time it passed over the laser, and with enough pressure, it could nudge an object out of orbit enough to avoid a future collision.

It could even be used to de-orbit the space junk entirely, perhaps by moving it low enough that atmospheric drag causes it to re-enter the atmosphere — so long as it’s small enough to burn up, so there would be no laser-propelled garbage raining down on Earth.

This laser is pretty weak, however, at just 5 kilowatts. Mason and colleagues say it could nudge up to 10 objects a day.

They say it could reverse the “Kessler syndrome,” a phenomenon wherein new debris formation outstrips the pace at which it falls out of orbit and burns up. As Technology Review’s arXiv blog explains, it’s named for NASA scientist Donald Kessler, who described the problem in the 1970s. He said colliding space junk could trigger a cascade of collisions that would create ever more space debris in ever more unpredictable orbits. This may already be happening, as evidenced by the collision between the Iridium 33 and Cosmos 2251 satellites in January 2009, as well as China’s destruction of its Fengyun 1C satellite in 2007. Both incidents created ongoing problems.

Mason and colleagues say much more research is needed, but the laser system could be a feasible, fiscally prudent alternative to space debris removal — nothing would be launched into space except photons, so there would be nothing else to add to the junk.