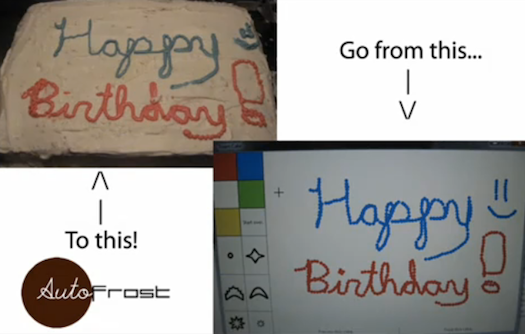 At Massachusetts’s Franklin W. Olin College of Engineering, a group of students got together in that most noble of tasks: Combining robotics and pastry. The end result is the AutoFrost, a dual-Arduino ‘bot that takes simple digital drawings and recreates them in frosting on cakes.

The AutoFrost uses a custom-built drawing program, sort of like an even-more-barebones version of Microsoft Paint, and in one click sends that drawing over to the robot for frosting. The AutoFrost itself is a three-axis machine, controlled by two Arduino microcontrollers: One controls the movement of the froster along the XY axes, and one controls the excretion of the frosting.

It’s still a rough draft of sorts; while it does the job admirably well, it can’t automatically swap frosting nozzles or different tubes of frosting (for different colors, say). When it needs a new color or nozzle, it’ll stop frosting and request that the user make the necessary adjustment. In the future, they also plan to include sensors to gauge the shape and size of the cake, plus a selection of different nozzles.

The best part might be the personality the team injected into even the commands. When you’ve finished your drawing, you hit a button that reads, “I’m ready to design an amazing cake.” Finally, the MS Paint drawing of a dinosaur I slaved over for eight minutes can be rewarded with a canvas worthy of its beauty.