Researchers at the Fraunhofer Institute in Germany have created the world’s thinnest pico projector – less than quarter of an... 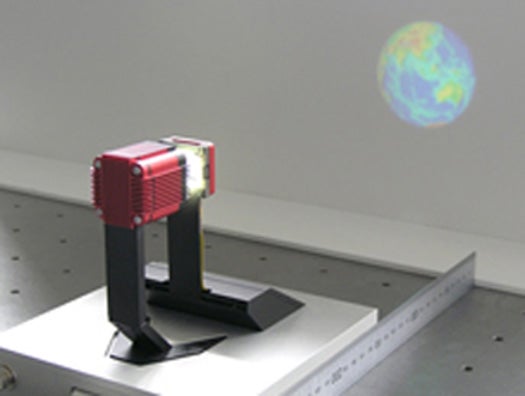 Researchers at the Fraunhofer Institute in Germany have created the world’s thinnest pico projector – less than quarter of an inch thick. To ensure that the image from the 6×6 millimeter device was still visible, they used a new micro-lens system that allows it to project a bright 800 by 480 pixel display.

The system uses 45 red, green and blue micro-lenses, each holding a 200×200 pixel LCD. Each lens produces its own image, all of which patchwork to create the display you see on your wall. However, the tiny projector only emits 11 lumens of light, four less than the best of other small picos on the market (though about the same as 3M’s pocket camcorder/projector hybrid).

Marcel Sieler, the scientist behind the project, claims that if the new system were scaled up to the size of current pico projectors, it would produce about 90 lumens–pretty impressive. As it stands, the projector is tiny enough to fit inside a smart phone, but the problem is that even existing pico projectors are really not that bright–you need to use them in a dark room for it to be worth your while, and even then clearest images are rather small and dim. Sieler is currently working to reduce the LCD pixels from 8.5 microns to 3. But if it’s going to be worth it to incorporate pico projectors into smaller gadgets like smartphones, we’ll need a combination of miniature size and very bright images (with higher resolutions). For now, still, it looks like a choice between one and the other.