The Easy Way Up: An Escalator for Firemen 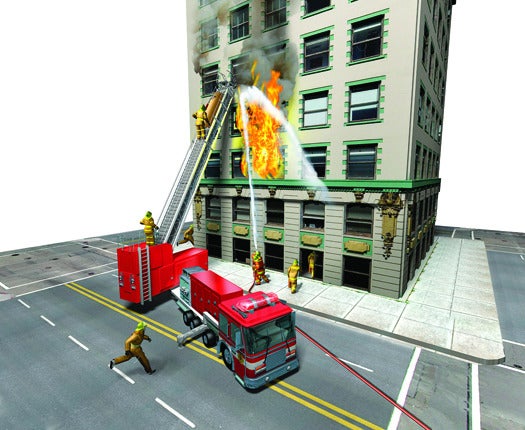 Orville Douglas Denison spent much of his youth sketching out futuristic aircraft, but in retirement he has turned pragmatic. His “aerial fire truck,” a cross between a conveyer belt and a ladder, could help firefighters quickly shuttle victims out of burning buildings.

Denison began studying fire-rescue technology after watching TV coverage of the World Trade Center evacuations on September 11, 2001. Eventually he turned his focus to the ladders often used for smaller buildings. Firemen began deploying telescoping ladders in the 1880s, and they haven’t changed significantly since. “It’s ridiculous to climb up, put someone on your shoulders, and climb down,” Denison says. There had to be a faster way, he thought. So he designed a moving ladder that could be retrofit-ted to trucks to reduce a firefighter’s climbing time by more than half.

In a rescue, firemen could extend Denison’s hydraulic ladder to windows as high as 113 feet. But rather than clamber up the ladder, the firefighter would hop on, and the rungs would roll up at 200 feet per minute—more than twice the average climbing speed of a firefighter weighed down by 130 pounds of gear. The firefighter would ride to a window, load unconscious victims into a rescue bag, hook the bag to the ladder, and shift it into reverse to bring the person to safety. Denison says it can now take up to 15 minutes, and sometimes several men, to carry one victim down a ladder from 10 stories. He estimates that his ladder could lower four people to the ground in less than four minutes.

Several firefighting experts praise Denison’s innovative approach, while also nitpicking the design, suggesting that simpler is better for rescue technology. But Denison, who has interest from some manufacturers, welcomes the critiques—he’s intent on making his ladder a reality. “To me,” he says, “this is an obvious necessity and a solution to an age-old problem.” 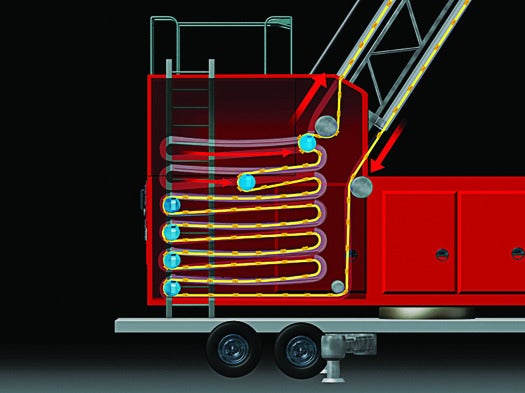 Hydraulic Ladder: How It Works

As Denison’s new hydraulic ladder extends, it draws additional rungs from inside the base unit. The rungs are on rollers that slide on tracks to feed the ladder. Each roller moves independently and is attached to a spring-loaded cable that keeps the line taut as the rungs run up and down the ladder at 200 feet per minute.