Bio-Scaffold Regenerates Rabbit Joints In Vivo While the Rabbits Run

Though artificial-joint tech is pretty advanced these days, with titanium hips and knees built to last a decade or more,... 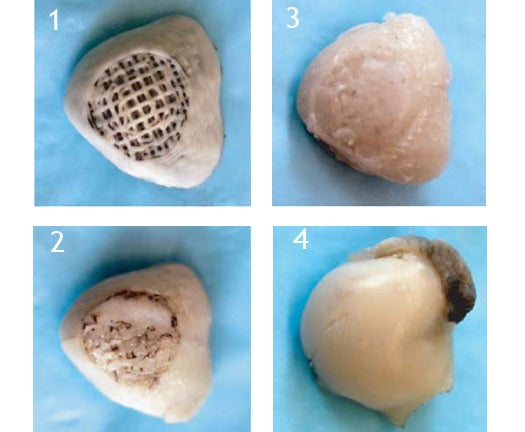 Using a scaffold inside a living rabbit, researchers were able to stimulate the rabbit's own stem cells to regrow injured joints. via Technology Review
SHARE

Though artificial-joint tech is pretty advanced these days, with titanium hips and knees built to last a decade or more, they won’t last forever — and aging patients will have to go back under the knife for upgrades. Naturally re-growing their own bones would be a nice alternative.

For the first time, researchers have proven this can work, by stimulating the body’s own stem cells to re-grow joint tissue around an implantable scaffold.

In a study published this week in the journal Lancet, scientists report the technique successfully regenerated joints in living rabbits, even as the joints were being used.

Columbia University researchers, funded by the National Institutes of Health, removed forelimb thigh joints from 10 rabbits and made 3-D models of them. They added criss-crossed microchannels to serve as a scaffold, Technology Review reports.

They added a growth factor protein to the scaffolds and implanted them in the rabbits’ forelegs, following the same surgical procedure used to implant titanium replacement joints. The growth protein drew the rabbits’ own stem cells to the location of the missing joint, where they regenerated bone and cartilage.

Within four weeks, the rabbits were able to walk around normally, the researchers say.

The work simply proves the concept, and much more work needs to be done before this technique could be tried in humans, according to Columbia scientist Jeremy Mao, who led the research. Two-legged creatures place much more pressure on their leg joints, and people in need of joint replacement may have other medical issues that could affect joint regeneration.

Still, as Tech Review notes, the finding is promising. Re-growing cartilage and bone even while the joints are in use could mean a simpler and longer-lasting solution for joint replacement.