Wearable Computers for Pitchers Could Come to Major League Baseball 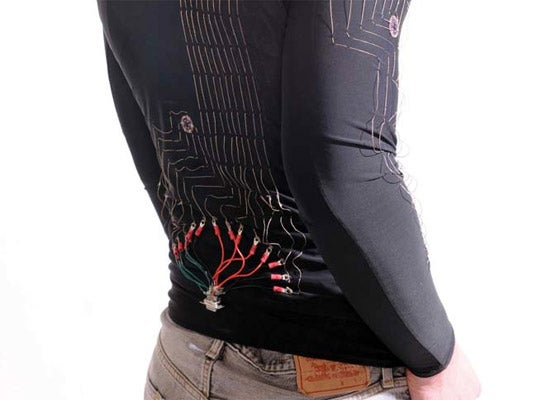 Sensors that can detect the biomechanics of a pitcher’s fastball have usually required test subjects to perform their windup in the lab. But now three engineering students have created a smart compression shirt that could track pitching mechanics out on the mound, Ecouterre reports.

Major League Baseball teams have taken a strong interest, because the shirt allows coaches to spot pitching inconsistencies resulting from fatigue or poor technique, which might lead to injury. Such pitcher injuries can cost MLB teams as much as $54 million in salary losses per year.

The Northeastern University students embedded motion sensors and conductive threads within a compression shirt not unlike those already worn by athletes. The conductive thread powers the sensors on the back, forearm and biceps, and also links to a software program which records acceleration and movement of the pitching arm.

David Schmidt, Marcus Moche, and Alexandra Morgan have begun developing a truly wireless version of the shirt based on the prototype.

“Major League Baseball is eager for any training aid — short of steroids — that’s going to provide them an edge,” said Charles Fountain, a journalism professor at Northeastern University.

Of course, steroids are hardly the most cutting-edge illegal aids for athletes — gene therapy could be where it’s at. But we digress. Surely MLB teams can pony up for a few of the $200 shirts for their high-paid pitchers to wear in the bullpen or during exhibition games.