Under Armour’s E39 shirt looks mostly like a typical Under Armour compression shirt, which is to say, entirely unflattering on... 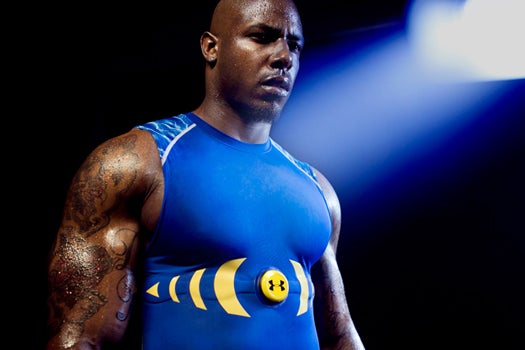 Under Armour’s E39 shirt looks mostly like a typical Under Armour compression shirt, which is to say, entirely unflattering on those of us who aren’t professional athletes. But the E39 is actually a very different beast from the usual apparel, packing a triaxial accelerometer, a heart-rate monitor, and a breathing monitor. The days of simply clocking an NFL prospect’s 20-yard sprint time are over–now coaches can see second-to-second updates on the player’s internals, and even track the acceleration and deceleration of a player’s individual strides.

The E39 shirt will be used by “somewhere between 10 and 30” NFL prospects at this year’s NFL Combine, a week-long exhibition of the nation’s best prospective football players in which the upstarts are tested both mentally and physically. It’s one of the most important tests for a young player, who might be able to overcome a small size or undistinguished college career and impress coaches with strength, speed, or fierceness. The coaches will have an extra tool to measure physical fitness this year in the E39.

The heart-rate and breathing monitor embedded in the sides of the shirt are fairly standard, though useful to find out real-time updates on a player’s internal mechanisms. But it’s the triaxial accelerometer that’s particularly interesting to us. Embedded right in the center of the chest, the accelerometer measures the left and right side of the body separately, showing how the two work in concert (or not so much). That allows measurement of each stride in its acceleration and braking, which can help a player make minor adjustments to maximize speed.

Wired cites an example in which a player was taking exceedingly long strides, which resulted in the front foot braking as the rear foot caught up. A coach noticed the deceleration that emerged as a result of that braking, and advised the player to simply take shorter strides. The player instantly showed smoother, more consistent acceleration, and the reduction of the deceleration that dogged him before.

You’ll actually be able to see the E39’s data in real-time in the NFL Network’s broadcast of the Combine on Saturday, if you’re into that kind of thing. After the Combine, Under Armour will make the E39 shirt available to other athletes and schools.