A Lightweight Display Brings Instant Army Intelligence to Your Wrist

The flexible, durable, wearable screen could soon be standard issue 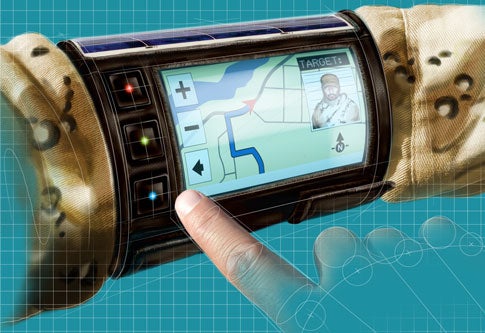 A special-ops soldier carries a slew of gadgets into battle. There’s the GPS unit to pinpoint his squad’s location, and a laptop for pulling up blueprints of terrorist compounds or infrared readings of buildings scoped out by robotic surveillance drones. With a radio and its five-pound battery, it’s too much gear. But in a couple years, troops could lighten their load with a rugged, flexible, wrist-mounted display that’s in development by the U.S. Army and HP Labs.

The solar-powered, bendable computer screen will allow for instant data and radio transmission, all in a half-pound unit, says David Morton, the program manager for flexible electronics at the Army Research Laboratory. The display’s thin layer of transistors sends electric signals to an e-ink screen, which converts those signals into grayscale images, similar to the way the Amazon Kindle does. Unlike the Kindle, the two-by-three-inch display can bend to fit around the user’s wrist because HP stamps the electronics and optical components onto pliable plastic. The process eliminates the need for the fragile glass backing used in the Kindle and other displays, says Carl Taussig, the director of information surfaces at HP. “You can strike these things with a mallet, and they just keep on working.”

While the Army works on a color screen, troops will test the black-and-white device and provide feedback for the final version, which should be ready for military use by 2011.