The problem with cell phone cameras is that, when you cram all the components of a larger camera into the... 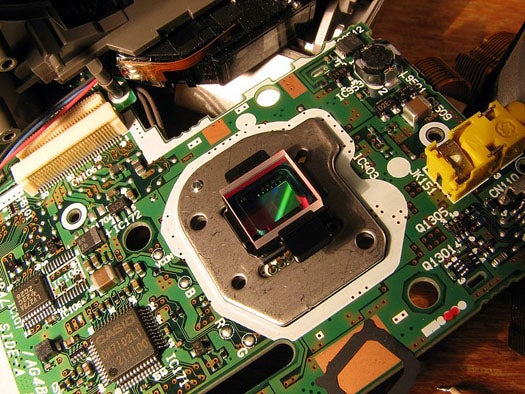 The problem with cell phone cameras is that, when you cram all the components of a larger camera into the tiny packages necessary to let them ride inside your phone, you drastically minimize their ability to capture light. But a new technology utilizing quantum dots could vastly improve the quality of your Leibovitz-like attempts at cell phone artistry without adding significant size or cost to your cell.

In most digicams, the silicon sensor is overworked. Not only does it absorb incoming light for conversion into electrical signals, but also must store the signal and route it to the processor that turns it into Facebook-worthy portraiture.

The only way to pack all of these components into a phone requires the photodetector to be positioned beneath a layer of transistors, metal wires and other electronics, obstructing nearly half the incoming light from the lens (the low-res lenses in cell phones are another story altogether). The process is notoriously inefficient, wasting nearly half the photons that enter the camera.

But Menlo Park-based InVisage has demonstrated a way to use a one-micron-thick layer of quantum dots to double the amount of light that reaches the photodetector in the average cell camera sensor. Quantum dots, put simply, are tiny semiconductor crystals that can be finely tuned to specific tasks, particularly when it comes to absorbing light. When tailored to camera sensors, the quantum dots convert photons into electrons with nearly 100 percent efficiency, then pass those electrons off to an electric field below the quantum dot layer so they can be measured as an electrical signal.

Revamping the means of producing silicon photodetector devices could be an expensive proposition, but InVisage has devised a means of applying a thin layer of quantum dots to silicon sensors using the same method already used to apply photoresist. That means the technology could double the amount of light absorbed by a camera as well as its efficiency at converting that light to electricity at very little extra cost to manufacturer or consumer. We could see quantum dot cameras on the market by the end of 2011.