Orange’s Prototype Power-Welly Boots Are Made For Charging

First the British invented waterproof Wellington boots; now they’ve invented a way to derive power from those boots. Could corduroy-friction-power... 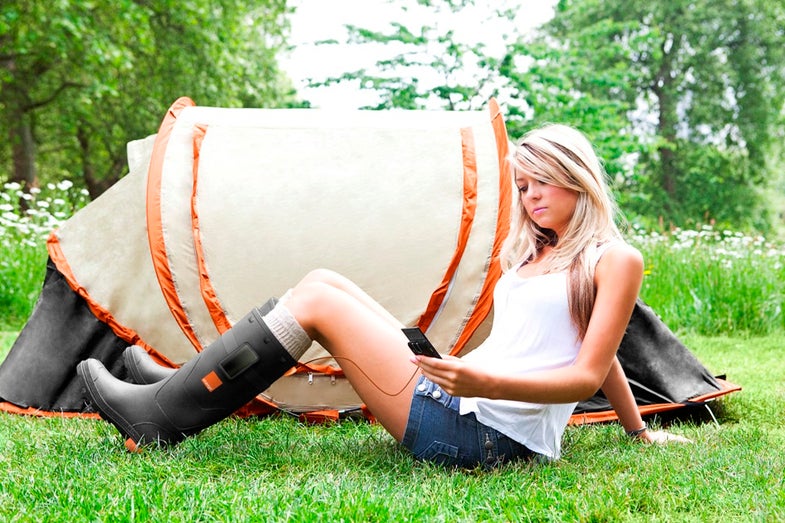 First the British invented waterproof Wellington boots; now they’ve invented a way to derive power from those boots. Could corduroy-friction-power be far off?

The European telecom firm Orange, which sponsors the huge Glastonbury Festival at the end of June, is promoting its new “Power Wellies” as a means for festivalgoers to keep their cellphones charged.

Users will have to stomp in the Pilton mud for about 12 hours to generate enough electricity to charge a cellphone for one hour, however — so the wellies are more notable for novelty than practicality.

The concept is interesting, however. The boots work by capturing the heat of the wearer’s feet — not kinetic energy, like other walking-power concepts we’ve seen.

Thermoelectric modules made of semiconductor materials are embedded in the wellies’ soles. The modules are connected to form an array of multiple thermocouples, or a thermopile. Then they’re sandwiched between two thin ceramic wafers. Heat from the foot is applied to the top side of the wafer, and cold from the ground is applied on the other side, and voila: electricity. The hotter your feet get, the more electricity the boots produce.

The Power Wellies are the latest in a line of phone-charging devices from Orange and its renewable-energy partners. Others include the Recharge Pod, powered by wind and solar energy; the Dance Charger, which used kinetic energy created by dancing; and the solar-powered tent.

Several other French, Dutch and British firms are using foot power to keep the lights on. In Toulouse, France, city officials are investigating the use of energy-absorbing sidewalk panels that harvest pedestrian power. London-based Pavegen Systems also has pavement slabs that harvest kinetic energy.

The terrifically named firm Sustainable Dance Club already has a foot-powered dance floor in Rotterdam, the Netherlands. But like the Power Wellies, those systems provide tiny amounts of power — meaning people have got to be really, really enjoying themselves to generate electricity.