Of Her and Humanoids: The Year in Robotics

Follow robotics closely enough, and every year seems like a big year. But these tipping points are often false, or... 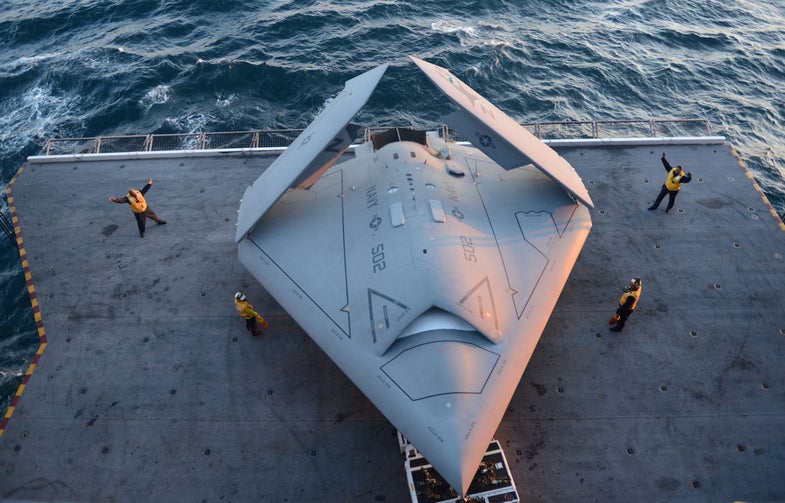 Follow robotics closely enough, and every year seems like a big year. But these tipping points are often false, or at the very least over-reported, as dispatches from academic labs are confused with actual, historic deployments.

2013 was another matter. Robots became synonymous with Google. Robots stole the show on 60 Minutes. Robots were mocked, and were the subject of more mock-terror, arguably, than in any other year in recent memory. And even when they weren’t news, robots and their makers made surprising progress towards supplanting and supporting humans. Fictional bots contributed, too, as manufactured good guys (and one very charming girl) proved that even Hollywood can take a break, however brief, from vilifying machines.

From the highs to the lows, to the stories that simply did not compute, this is what robotics looked like in 2013. These trends are by no means comprehensive or ranked, but comments are enabled, so feel free to add your own picks for the year’s biggest bot-related breakthroughs and setbacks.

Some Drones Soar, Others Are Loathed

The word “drone” has become more than a nebulous descriptor for robotic aircraft. It’s a hopelessly politicized term, an invitation to condemn or celebrate the use of armed, remotely-piloted planes for lethal strikes in Central Asia, as well as the deployment of unarmed models to surveil civilians around the world. So Northrop Grumman’s breakthroughs in autonomous flight—launching the unmanned X-47B test plane from an aircraft carrier in May without human intervention, and then sticking a self-guided arrested carrier landing in July—can’t really be appreciated without context. After all, this was the same year in which a town in Colorado mulled over a baldly illegal drone-hunting license, and was flooded with requests from around the country. When Amazon’s Jeff Bezos appeared on 60 Minutes in December, unveiling the company’s plans to deliver small packages via GPS-guided octocopter, the media (with the exception of 60 Minutes) responded with a collective scoff. Others fretted about the safety of drones operating among people, and the privacy-eroding precedent that Amazon could set.

Still, whether they’ll come bearing Amazon parcels, or perform less controversial aerial recon over farmland and forest fires, the flying robots are coming. The Federal Aviation Administration (FAA) issued a roadmap for the integration of commercial drones into U.S. airspace within the next half-decade. As impenetrable as that document’s legalese may have been, the FAA made a clearer statement on Dec. 30, announcing the six sites around the nation that will be used to test and certify drones, clearing specific models to fly as early as 2015, and shaping federal regulations for years to come. Whether they’re flown from aircraft carriers, or launched from the local airstrip, the reach of drones has been expanded.

Toys that qualify as robots are a hoary old gadget category, first showing up in the 1980’s with the Armatron and Big Trak, and resurfacing occasionally in the decades since. But even by toy industry standards, there’s a gimmicky quality to toy bots—even something as capable as Robosapien started to grate after a few overly scripted minutes of dancing and yapping. Lego’s Mindstorms kits have been consistently engaging, with their junior engineer complexity, but they were the exception to the rule.

Then came 2013, and an influx of powerful toy bots. Romotive’s tank-treaded, iPhone-headed Romo can be used as a rolling platform for video calls, or programmed to respond to stimuli with a series of behaviors (recoiling and playing a song, for example). Sphero 2.0, the more capable follow-up to the TK’s original motorized ball, can be programmed in even more detail, using its suite of internal sensors to map its environment. There’s Anki, the toy cars that took the stage during an Apple press event, and whose modest, Hot Wheels-ish exteriors conceal sophisticated autonomous driving algorithms. And though Modular Robotics won’t release their Moss kits until next year, the snap-together bots raised more than $360,000 on Kickstarter, and represent the first real commercial deployment of modular robots. Finally, Lego released Mindstorms EV3, with its own impressive array of autonomous functionality, such as the ability to fire tiny missiles when the robot spots a given color.

All of these bots have the same problem that’s plagued past toy bots—at $100 and up (way up, in the case of the $350 Mindstorms EV3) they’re too expensive for true, mainstream adoption. What’s new, however, is that they might just be worth it. By leveraging the processing power of smartphones, these products are finally as smart, and often as pliable, as you want a robot to be. Mindstorms is an exception, since the most advanced functions require tooling around on a Mac or PC. But piloting a sinister robo-snake around the house with your iPhone is nothing to sniff at. If you care about the future of robotics, this renaissance in programmable robot toys holds real promise. And even if kids don’t care, hardcore robo-enthusiasts and genuine roboticists now have access to more capable testbed platforms for checking code and honing their human overlord skills.

Google’s forays into hardware have been, for the most part, partnerships—tablets and phones released under the company’s brand, but built and co-branded by the likes of Asus, HTC and Samsung. Even the company’s pioneering work in driverless cars has meant buying and modifying a fleet of Priuses. But with the acquisition of eight robotics-related companies in 2013, Google has positioned itself to become the ultimate hardware manufacturer. Through the power of the purse, the software giant has suddenly become a robotics giant.

Some of the companies that have been folded into Google’s new robotics division (led by former Android head, Andy Rubin) are relative mysteries, such as the wheel-manufacturing Holomni. But if everyone doesn’t already know about Boston Dynamics, they should. The company consistently made news in 2013 with its various two and four-legged bots, including the record-breaking sprinter WildCat, the imposing Atlas humanoid, and the stealthier, more bullet-resistant iteration of the LS3 robotic pack mule. What Google ultimately does with its various bot companies won’t likely live up to the hand-wringing—according to the New York Times, Google seems focused on manufacturing—but no other corporation on the planet, including iRobot, or a range of military drone-makers, has assembled a more impressive array of robotic know-how.

What’s most distinctive about the robots that showed up on the big and small screen in 2013 is their disposition. After years of Transformers and Terminator movies framing bots as invaders and oppressors, Pacific Rim‘s giant Jaegers are on our side. In fact, for a film that’s ostensibly about Godzilla-size monsters, the robots are a genre departure, shoe-horned in to give humans a fighting chance. Likewise, the androids in Fox’s Almost Human are presented as a possible solution to a futuristic crime wave. They inspire far more sympathy than suspicion—even the more soulless models seem worthy of pity, when you get a glimpse of their unnervingly smooth, sexless nudity.

Whether Pacific Rim and Almost Human are quality entertainment is certainly up for debate. But with the latter’s strong ratings, and the former’s galvanizing effect in online circles (fans are clamoring for a sequel, despite the disappointing box office returns), robots became part of the pop culture discussion, as machines that you can root for, instead of against. And though it was in limited release in 2013, Her deserves an honorable mention, for one of the freshest, most nuanced, and least cliched depictions of artificial intelligence since the rebooted Battlestar Galactica series (or, if you’re so inclined, its short-lived spinoff, Caprica). Spike Jonze appears to be downplaying the sci-fi nature of Her, brushing aside questions of feasibility and futurism, and emphasizing the love story between a guy and a gal who just happens to be a disembodied AI. Is he afraid that the film will fall into the dreaded sci-fi ghetto, alienating audiences who instinctively avoid the entire genre? Whether he’s right or wrong, Her is a brilliant fable of human-computer interaction, and a fitting end to 2013’s interspecies love-in.

For some of us, the run-up to the DARPA Robotic Challenge (DRC) trials in December was giddy stuff, as some of the smartest robotics labs in the world revealed their designs for disaster-ready bots. A pre-Google-acquisition Boston Dynamics inspired the usual array of shrill Skynet jokes with its debut of the ominous Atlas, which soon after snapped its own ankle on camera, and promptly became a laughingstock. And NASA’s Valkyrie briefly captivated the internet with its anime-quality good looks and impressive genealogy (it shares R&D DNA with Robonaut 2, the legless, highly dextrous bot that’s currently being tested on the International Space Station).

When it came time for the actual DRC trials, however, the world wasn’t exactly watching with baited breath. Some of the most promising bots scored well out of the crucial top eight slots—Virginia Tech’s THOR, which we had featured in a cover story earlier in 2013, was benched, and its smaller, less-capable backup bot, THOR-OP, fell short of expectations. And Valkyrie came in dead last, with zero points. But don’t imagine millions of viewers erupting in cheers or quietly consoling one another. The DRC trials occurred on the Friday and Saturday before Christmas, almost guaranteeing that no one would be following the live YouTube feed or online coverage from attending press.

The biggest event in the history of humanoid robotics—meaning, the breed of robots that has been the most elusive for researchers, but that could hold the most promise for saving lives during future disasters—slipped by relatively unnoticed. Google wound up utterly dominating the DRC, having acquired both the Japan-based startup, Schaft, that took first place (their S-One bot is shown above), and Boston Dynamics, whose Atlas bots occupied half of the eight top slots (albeit controlled by various teams). It’s possible that next year’s finals will be have a much higher media profile, particularly since Google is the clear Goliath, and it might be enticing to root for the relatively small selection of Davids, such as the primate-inspired bots from Carnegie Mellon University and NASA’s Jet Propulsion Lab. Regardless of who was or wasn’t watching, 2013 showed us the best, most capable humanoids on Earth. It also proved that Google knew what it was doing, with its surprising robotics acquisitions. Whoever wins the $2M prize in 2014, get ready—Google built its driverless car group by hiring the winners of DARPA’s previous robot competitions, the Grand and Urban Challenges. If the champions of the DRC finals aren’t already Google employees, chances are, they soon will be.