Out of the Blue, DARPA Seeks Means to Manipulate Lightning

China and Russia try to control rain clouds and the Dutch use technology to keep low-lying inland areas from flooding,... 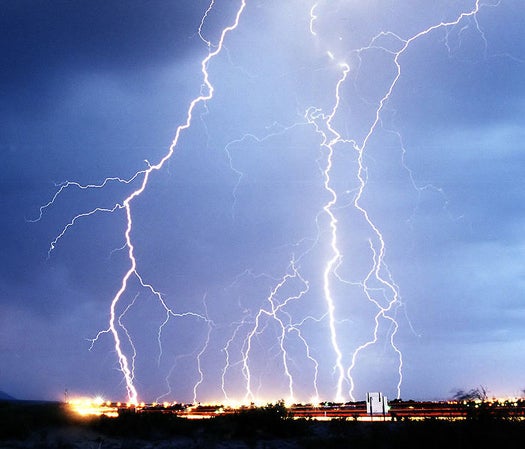 China and Russia try to control rain clouds and the Dutch use technology to keep low-lying inland areas from flooding, so why shouldn’t the United States be able to manipulate lightning? In an attempt to better understand one of nature’s most powerful processes, DARPA issued a broad agency announcement yesterday asking for ideas on how to best protect American personnel and resources from dangers and costs associated with lightning strikes. To wit:

Lightning causes more than $1B/year in direct damages to property in addition to the loss of lives, disruption of activities (for example, postponement of satellite launches) and their corresponding costs. A better understanding of the physics underlying lightning discharge, associated emissions, and related processes (for example, tribocharging in the clouds) may lead to revolutionary advances in the state of the art of lightning protection.

Specifically, DARPA seeks validated models on the natural lightning process, a means of triggering lightning within a storm intentionally, and strategies for protecting a given area from lightning strikes during a storm by somehow reducing the probability that lightning will strike there.

The call for proposals also asks various questions about manipulating lightning’s natural unpredictability: “Given an area (size: 1 square kilometer) in the presence of a thunderstorm, is it possible to reduce the probability of a cloud to ground lightning strike in that area? How might lightning initiation be inhibited, or lightning propagation be diverted or blocked to achieve this goal? Is it possible to induce lightning in one region within the storm system, in order to suppress lightning in the region in need of protection?”

The call for proposals clearly seeks a means of protecting U.S. assets – think military and space installations that could do without a massive, circuit-frying electrical surge – from the often-devastating effects of a lightning strike.

Of course, the DARPA enthusiasts in us want to believe that the DoD is actually pursuing a lightning weapon that we can aim at our enemies’ military installations. But one thing is made abundantly clear by this call for proposals: there’s a lot about lightning we just don’t know.