Little hover-spheres will steer themselves around obstacles inside and outside the ISS, wirelessly share power, and more 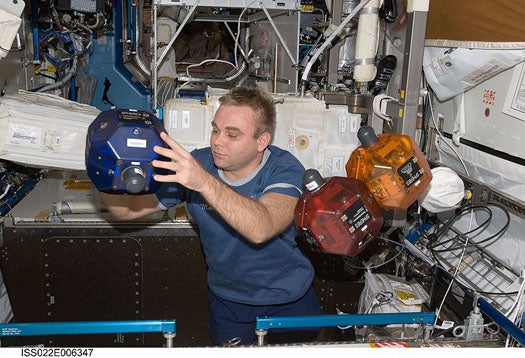 The MIT-designed SPHERES (that’s Synchronized Position, Hold, Engage, and Reorient Experimental Satellite) aboard the ISS — those little globes that fly around like tiny satellites even though they are confined to the station’s interior — are in line for some big upgrades from DARPA. And in true DARPA fashion, the hardware updates are bold: aside from designing the next generation of spheres, DARPA wants the current models to be fitted with vision-based autonomous navigation and force fields.

SPHERES was created by DARPA so researchers on the ground — chiefly a group of grad students at MIT — would have a real-world test bed for formation flying algorithms. But anticipating other research opportunities, the SPHERES were built with expansion ports that allow new hardware to be installed on the CO2 propelled satellites. Now DARPA is ready to start plugging in said experimental hardware to see what works, with the eventual goal of taking SPHERES outside of the ISS.

DARPA’s first order of business: a vision-based nav system that will let two SPHERES create 3-D models of other objects in space and perform relative navigation maneuvers based solely on their own vision. To wit:

_ The target object should be assumed to be moving and possibly tumbling, and its state will not be a priori known to the observer SPHERES (except through their own sensors). Once a 3D model of the object is constructed, the two observer SPHERES will perform relative navigation (as demonstrated through some test maneuver) solely by sensory reference to the target object and its 3D model._

But if visual navigation and 3-D mapping doesn’t tickle the technophile in you, this next obejective should: DARPA wants to deploy electromagnetic force fields between two orbiting SPHERES so they can reorient each other without resorting to their thrusters. And as long as you’re configuring that hardware, DARPA says, “another goal of this program thrust area is to demonstrate wireless power transfer through resonant inductive coupling,” so two SPHERES orbiting in tandem can share power between them.

DARPA’s third objective simply wants engineers on the ground to start shaping the vision for the next generation of SPHERES, which will operate both inside and outside the ISS, coming and going through the smaller Kibo lab airlock. Topping the list of requirements: “Ability to operate both inside and outside of ISS,” “substantial maneuvering capability,” and “safety features enabling semi-autonomous operations in the proximity of ISS.”

To top it all off, DARPA wants to tap the collective wisdom of the crowd to develop cluster flight algorithms for the SPHERES, purportedly to raise awareness of super-neato science, technology, and mathematics opportunities among high school and college students, but also to see if crowd-sourcing complex systems even works (and, presumably, for the algorithms).

Noticeably absent from the upgrades to the floating spheres is a means to train a Jedi knight on the peculiarities of the Force. But with a meager $4 million in grants to spread across the varying and ambitious goals of the SPHERES project, perhaps the light saber tech will have to wait.

[DARPA via The Register]