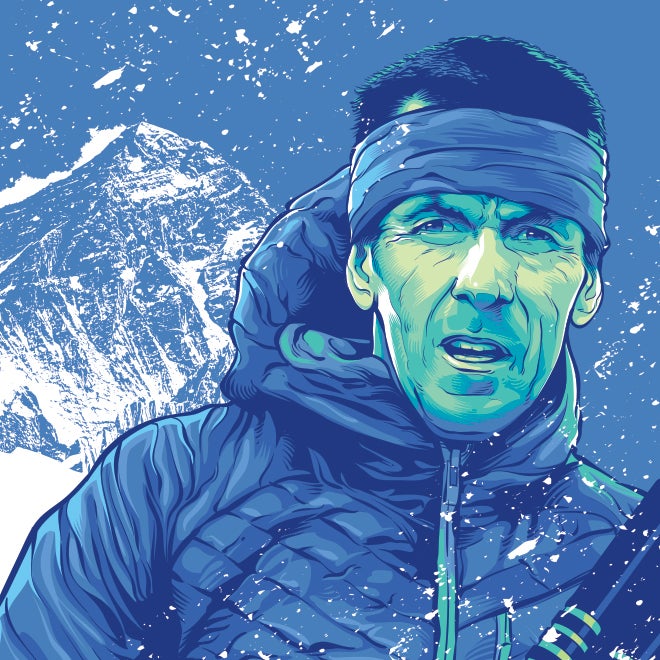 Davo Karnicar is the most badass athlete you’ve never heard of. For most people who push their limits on the world’s biggest mountains, summiting Mount Everest is a career capstone. In 2000, Karnicar did that— and more: He skied all the way down the highest peak on Earth, a first.

Karnicar, 54, has since racked up ski descents of the tallest summits on all ­seven continents. This summer, he tried tackling the wildly treacherous ­Pakistani peak K2 for the second time. Unfortunately, while setting up base camp at around 16,400 feet, he hurt his back and had to scrub the expedition. “If it’s not possible, it’s not possible,” he says philosophically.

But the latest K2 attempt was notable for innovative gear designed to make his kind of exploits safer: skis that fold in half. When attached to a backpack, normal-size skis can snag on snow, ice, or rocks, or get in the way of a climber’s careful motions. Elan, one of Karnicar’s sponsors, made the pair he carried. They jack-knife down to a little over 3 feet long. A reinforcing base plate under the bindings makes them incredibly stable. “This was a big surprise for me,” he says. “I will use just this ski for my sport.”

Raised in the alpine village of Jezersko, Slovenia, ­Karnicar took to the slopes with his ski-instructor father at an early age. “It was part of our ­family,” he says. While his parents supported his extreme adventures, Karnicar is more cautious with his own brood of eight. “First, I am father; second, I am husband; and in third place, I am skier,” he says with a laugh.

Karnicar is a sort of “underground hero” to professional climbers and carvers like Dave Watson, a Washington-based mountain guide and ski patroller who has swooshed down K2 from 27,395 feet. “His motivations are in the right place,” Watson says. “He’s doing it for the beauty of the mountain and his desire to go and have fun.”

While it’s tempting to think of extreme athletes as reckless, the opposite tends to be true. They train and prep intensively with their expedition teams. Before one of his epic descents, Karnicar keeps his feelings in check, saving any emotional moments for back home. “I try to stay just in concentration for skiing,” he says. “If we have too much emotion with us up there, it can be dangerous.”