How well do fancy mask designs actually protect against COVID-19?

The pandemic has led to a surge in new personal protective equipment that claims to be more comfortable, sustainable, or accessible. But health standards are all over the place. 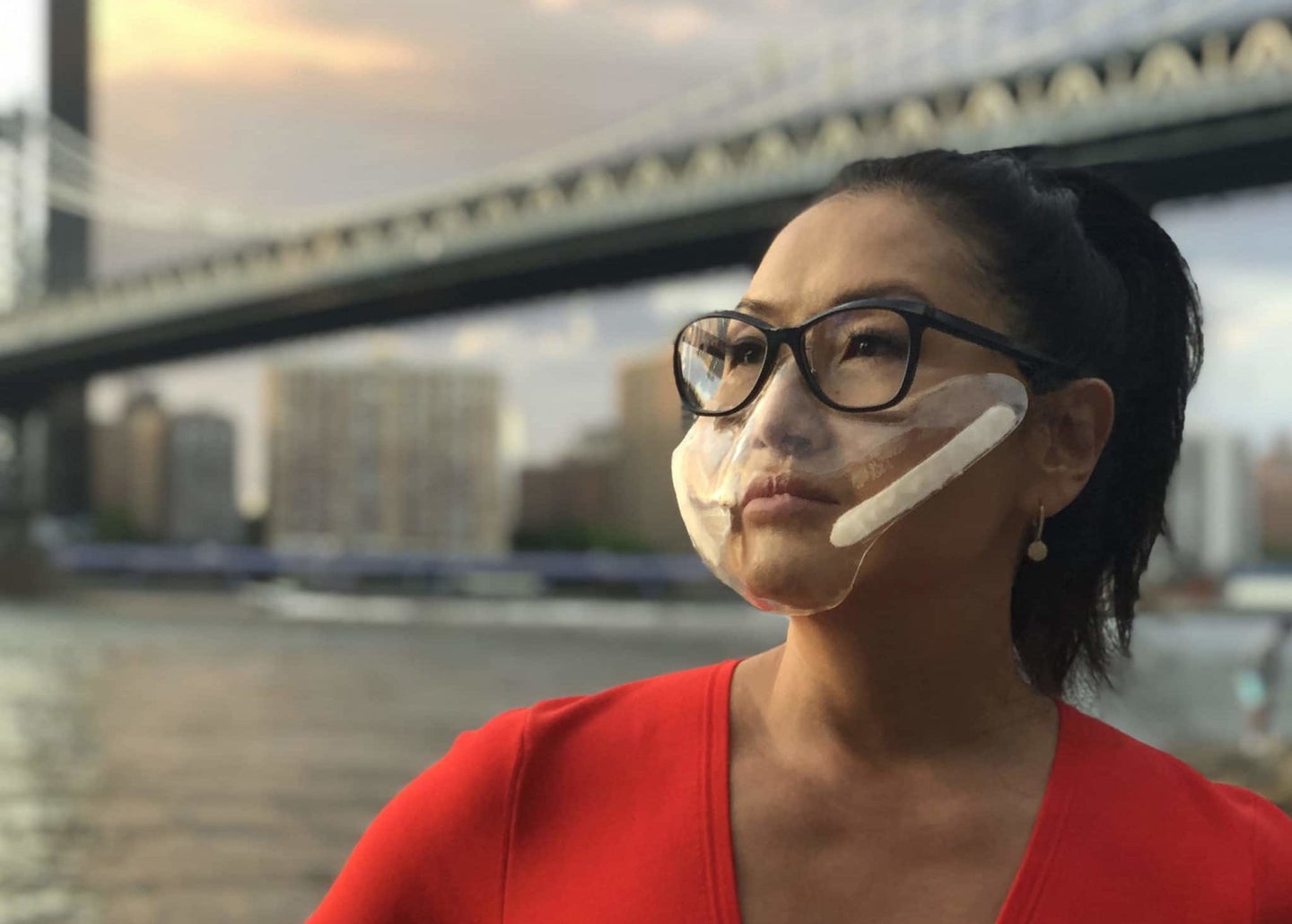 Hannah Thomasy is a freelance science writer splitting time between Toronto and Seattle. Her work has appeared in Hakai Magazine, OneZero, and NPR. This story originally featured on Undark.

In March, as COVID-19 cases spiked and supplies of N95 protective masks dwindled at the Bay Area hospital where her brother-in-law works, Megan Duong launched a local search for N95s. Along with her sister-in-law, Sabrina Paseman, Duong enlisted volunteers and tracked down 7,000 masks—barely enough to cover the needs of two hospitals for one day. “We just knew that it was not a scalable solution,” Duong says.

So, Duong and Paseman, both former Apple employees, set out to invent a new tool that, they hoped, would make available mask technologies more effective and accessible.

They weren’t the only inventors attempting to meet sudden, massive demand for personal protective equipment, or PPE. Experts say that PPE like masks is critical for slowing the spread of COVID-19. But for much of the pandemic, high-quality PPE has been in short supply for medical workers. Meanwhile, PPE available to the public has been of variable quality, with users complaining that cheap cloth masks, although widely available and recommended by public health agencies, are uncomfortable, hamper social interactions, and have limited effectiveness.

Those issues have spurred new innovation, as inventors strive to make PPE cheaper, safer, more comfortable, and more accessible—and, in many cases, may see opportunities to turn a profit while doing so. Already, some new designs have earned praise from experts. Many others have not yet demonstrated that they’re any more effective than a standard cloth mask.

“My concern is people are going to be spending a lot of money based on hype, which is not going to give them or anybody else any additional protection,” says Gary Garber, an infectious disease physician who also works with Public Health Ontario in Canada.

On crowdfunding sites like Kickstarter and IndieGoGo, inventors have raised millions of dollars for new designs of face masks, gloves, and other PPE. University engineering labs have turned their attention to making masks and face shields. The results run the gamut from clever to outlandish. It’s now possible to find startups crowdfunding for or selling a silver-plated antimicrobial glove, a facemask hidden in the brim of a hat, and a protective bubble that covers the user from head to chest. (All three designs have raised thousands of dollars on crowdfunding sites).

Other inventions include a 3D-printed mask that’s tailored to each individual’s face using artificial intelligence, and a plastic device that lets people get gas without touching the pump. Attempts to create transparent masks, which facilitate communication for people who read lips, predate the pandemic, but have experienced a surge of interest and investment.

Some designs come out of long experience. Before COVID-19 arrived, James Byrne, a radiation oncologist at Brigham and Women’s Hospital and a postdoctoral researcher at MIT, was accustomed to using an N95 to see a patient and then, he says, “chucking it in the trash.” Byrne and several colleagues have now turned their attention to designing a mask that, like the N95 respirator, can filter out 95 percent of airborne particles—but that is easier and more cost-effective to reuse.

Their Injection Molded Autoclavable, Scalable, Conformable (iMASC) system prototype is made of clear silicone rubber and has two circular filters located near the mouth. In a recent test, following government safety standards, researchers sprayed 20 iMASC-wearing participants with aerosolized saccharin, a sweet-tasting chemical. If participants could taste the saccharin at any point, the fit test was failed. All of them passed, and 95 percent of participants rated the breathability of the iMASC as either excellent or good.

The team is still in the process of performing more in-depth testing on the filtration efficiency and breathability of different filter materials. And they still need to determine how the masks perform during extended wear.

The iMASC is intended for health care workers, and the Centers for Disease Control and Prevention (CDC) does not currently recommend that the general public wear N95 masks. But there’s still demand for higher-quality protection—or at least masks that claim to be higher-quality protection—as well as masks that solve basic issues of comfort and fit.

Some masks claiming to solve those problems have been blockbusters. Since June 25, the UVMask from Colorado-based UM Systems, an optical and biotechnology company and subsidiary of Measure Inc., has raised over $3 million on crowdfunding platforms. Air coming into the mask passes through an N95-equivalent replaceable filter and then enters a “sterile vortex” where it is treated with UV-C light, which can inactivate viruses by damaging their genetic material. Without current campaign discounts, the product will cost $249. (The mask includes batteries, a charger, and 10 filters; additional disposable filters have to be purchased separately).

According to a testing facility in China accredited by the European Testing Inspection Certification System, the sterile vortex is able to kill more than 99.99 percent of bacteria over the span of three seconds. Boz Zou, co-founder and CEO of UM Systems, says that the company plans to test the device on virus inactivation as well. The mask, he says, will “absolutely” be better than an N95.

However, the mask has not yet undergone testing from the National Institute for Occupational Safety and Health (NIOSH), a federal agency in the U.S., to confirm that claim. The UVMask IndieGoGo page does not claim that the mask will protect users from COVID-19 specifically, or even mention COVID-19 at all.

Other crowdfunding campaigns are focused on improving existing technology. Almost immediately after Duong and Paseman’s futile search for N95s, Paseman, an engineer, started developing the Essential Mask Brace prototype. The mask brace is designed to make standard surgical masks more effective by improving their fit against the face. At a cost of $15 per brace, according to the Kickstarter campaign, it is more affordable than most other emerging mask technologies. The campaign has raised more than $110,000 so far from 1,820 donors.

“If you look at the data, the people who are most affected [by] the pandemic are low-income communities,” says Duong. “They can’t afford a $100 mask. And so if you want to find a solution to really, like what we’re saying, flatten the curve, you need to find something that is accessible, scalable, and affordable.”

After testing a few different versions of the brace (including some crowdsourced testing) and refining the design on 3D-printed models of faces from NIOSH, the team says they are expanding human testing on the latest iteration of the brace. But Paseman says that it’s difficult to get the actual masks tested for filtration, as government labs are overwhelmed with requests.

Mark Rupp, chief of the Division of Infectious Diseases at the University of Nebraska Medical Center, says that a device to improve mask fit is a great idea. “Multi-ply masks do work, and they work best if they fit tightly to the face.”

Other designers—including inventor Alice Min Soo Chun, founder and CEO of the startup SEEUS95 Inc.—are concerned about the amount of waste generated by current masks and respirators. The SEEUS95 mask is marketed as a “radical alternative to traditional N95” and has raised more than $211,000 from 2,152 donors on Kickstarter. The SEEUS95 is made of clear silicone, uses “proprietary N95 biofilters,” and attaches to the face with a sticky “skin therapy layer” that supposedly produces an airtight seal.

The biofilters are composed of bamboo fibers, silk, silver, and carbon. Although the Kickstarter page has a stamp claiming an “MIT lab + AFFOA tested filter,” Chun says that testing is still in progress, and there is no data available yet. The filtration efficacy graphs on the Kickstarter page come from a paper that tested the filtration efficacy of common fabrics like cotton, silk, and chiffon, not from tests on the biofilters themselves.

The company’s vision, according to its Kickstarter page, is to “use sustainable materials and help the planet.” But, Chun says, the biofilters are not recyclable or compostable, although she noted that they are biodegradable, and when “they go into a landfill, they’ll just go back to the earth.” Asked how long it would take the filters to break down, Chun says “they’re already part of Mother Nature.”

The team has not yet performed any tests to ensure a snug face fit. Instead, they demonstrate that the sticky layer that adheres to the face keeps “skin protected, hydrated, healthy, and smooth” by showing the material being applied to a banana.

Rupp says that, while clear masks will be beneficial for people who read lips, he is skeptical about the feasibility of the SEEUS95. “If they really have mostly clear plastic and a very small area that you breathe through, it just seems to me that that’s going to be associated with some difficulty breathing,” he says. (The SEEUS95 is made of clear silicone, not plastic.)

Not all medical professionals are convinced that the general public needs better mask technology, rather than just better education about how to use existing masks. Garber says improper usage is still a problem. For PPE to be most effective, he says, it is crucial that people wash their hands before taking the mask on and off and avoid adjusting the mask or touching their faces with potentially contaminated hands.

Correction: A quote in this article from Mark Rupp, chief of the Division of Infectious Diseases at the University of Nebraska Medical Center, erroneously describes the SEEUS95 mask as being made of “plastic.” It is made of silicone. A clarification making the distinction has been added.