XKCD Graphs The Future Of The Past

Some futures, however, are yet to come 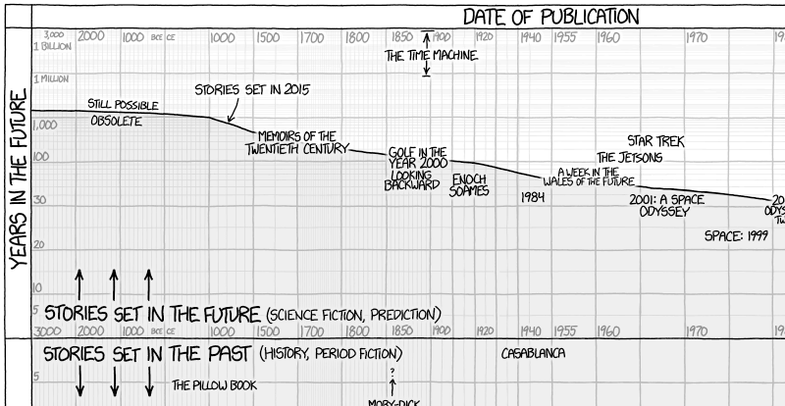 “Always in motion is the future,” a wise green muppet once said. XKCD creator Randall Munroe has illustrated this fact in his usual incisive fashion in his latest comic strip: Stories of the Past and Future.

Munroe’s catalogued popular works of fiction and then plotted them on a graph, with one axis representing when the work was created and the other showing the period that it represents. Everything from Shakespeare’s history plays to Star Trek and Annie make the list, with some particular fascinating insights.

In the past, Munroe isolates a number of works that were now published closer to the historical time period they depicted than today. The movie Gone with the Wind rides that line, for example, as it was released 76 years ago in 1939 and shows the Civil War in Georgia, 70-some years prior.

Looking forward, the chart also illustrates science-fiction works that illustrated futures that are in turn now the past, such as 2001: A Space Odyssey and 1984. Even in the recent past, it’s clear that people have had a hard time predicting the future accurately in fiction: think of the number of sci-fi works that have featured space colonies and flying cars—and which also totally miss the advent of the Internet.

Don’t worry, though: the futures of Star Trek, The Time Machine, and The Jetsons haven’t been ruled out. As for the 2015-set Back to the Future, Part II, well, we still have about 10 months for those hoverboards and Nike self-lacing shoes to show up.