Seeing Inside The Guts Of A Virus 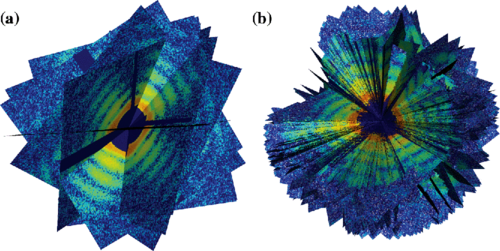 Even though mimiviruses are some of the largest viruses we know of, they measure only one tenth the width of a human hair at their largest. Understanding the structure of something so small is not an easy task, so researchers have been working to find different ways to look inside it. In a paper published today in Physical Review Letters, researchers from Uppsala University in Sweden used a new technique to make a 3D reconstruction of the large virus out of almost 200 x-ray snapshots.

A combination of 10, then all 198 diffraction patterns created as a result of the imaging process.

When your doctor wants to see if your bone is broken, she asks for X-rays, which are visual representations of where the x-rays were absorbed or reflected off of various structures in the body. On a much smaller scale, biologists do the same thing to understand the inner workings of objects like viruses, proteins and microorganisms, but those structures are often so small that researchers need a lot more snapshots to get a good look at them. In a process called x-ray crystallography, researchers create crystals that have many copies of the same object. Then they shoot x-rays at it, and look at how the x-rays were absorbed or reflected to understand the molecules’ inner structure. They snap a lot of photos, then compile them into one complete 3D rendering.

But x-ray crystallography has some major limitations. It can’t be done with living cells, and larger objects can have more variations or be more complex. In a mimivirus, for example, the DNA isn’t always in exactly the same place.

The Swedish researchers have created the most detailed mimivirus rendering to date by shooting pulses of densely packed x-rays at viruses that aren’t arranged as neatly as in crystals. The downside is that the method destroys the molecules it’s imaging, because the x-rays are much more powerful than in the conventional method. But the researchers hope that, as they perfect their method, they can create renderings of living viruses or bacteria, and do so at a high resolution.

At the moment, their colleagues are not particularly impressed with the images’ current resolution of 125 nanometers, since that resolution has been achieved before. But as the team perfects the process and improves the algorithms that turn the messy x-ray data into images, the researchers hope the new technique will help reveal the structures of microorganisms that are still shrouded in mystery. 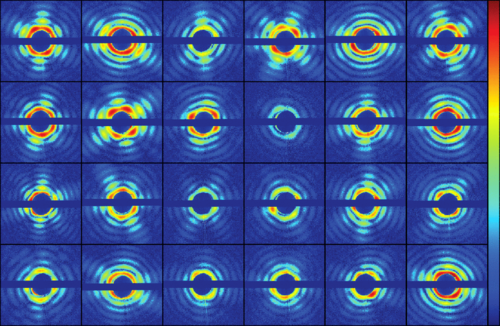 24 of the 198 diffraction patterns that resulted from the X-ray blasts.