Researchers Find Evidence of Other Universes Lurking in the Cosmic Background

Our poor universe shows bruises from collisions with other universes 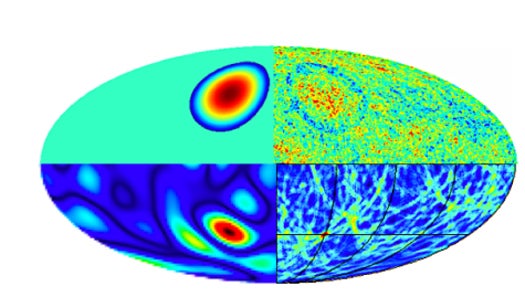 Just when the search for exoplanets looked like the undisputed fashionable field of study for 2010, the cosmic microwave background (CMB) is stepping to the forefront of astronomy and cosmology. Last month, it was Oxford’s Roger Penrose claiming that he’d found evidence of a cyclical universe in patterns of concentric circles in the CMB, suggesting our universe is just one of many that have come before it (and will come after it). Now, another group of researchers are claiming the CMB contains evidence of other universes that exist concurrently (and outside of) our own.

The new evidence, put forth by a group of researchers at University College London, is based upon the model of “eternal inflation,” which is predicated on the idea that our universe is part of a larger and ever-expanding multiverse. Our universe is contained in a kind of cosmic bubble that exists alongside other universes contained in their own bubbles, and in these universes the rules of physics could be far different than in our own.

If the eternal inflation theory is correct, it follows that our universe and other universes have likely collided in the past as they violently bounced around the larger multiverse, and those collisions should be evident in the CMB (the cosmic microwave background is a leftover from the Big Bang, and thus is of interest to astronomers and cosmologists for the long historical record it contains – if researchers know what to look for).

The University College team went looking for “cosmic bruises” in the CMB that indicate places where other universes collided with our own at some point, and it claims to have found them in data from the Wilkinson Microwave Anisotropy Probe
(WMAP), which has been measuring temperature differences in the CMB over the past decade. If indeed the spots are found to be “cosmic bruises,” it would lend a lot of credence to the idea that there are other universes out there that at some point collided with our own.

But that’s a big “if.” If the earlier CMB findings by Penrose are any indicator, proving or disproving these sorts of claims rooted in WMAP data is extremely difficult. Fortunately, as Tech Review points out, the ongoing Planck mission should soon provide a much better picture of the CMB to astronomers, allowing them to hopefully prove or disprove some of these cosmological theories. Until then, the time is ripe to attribute statistical anomalies in the vast CMB data set to complex cosmological theories.

For the cosmically curious, check out the University College, et al. paper here (PDF). And feel free to assert your own theory of universal origins in the comments below.