Crystals and eggshells tell a 105,000-year-old story of humans in the Kalahari Desert 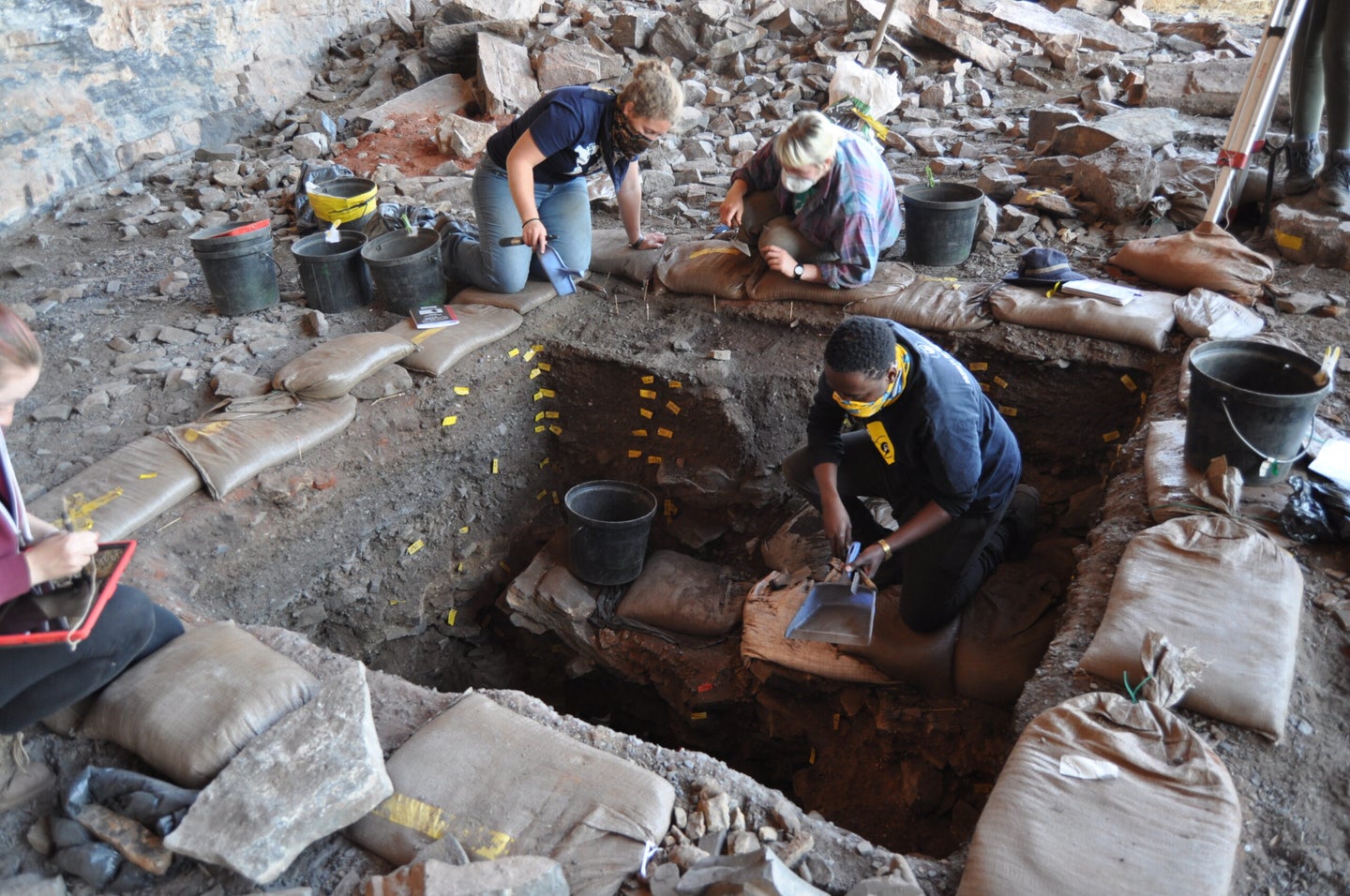 Researchers of the study dig at the excavation site.
SHARE

Today the Ga-Mohana Hill sits amidst a fairly flat and dry landscape, offering up views of the Kalahari dunes. The closest towns are nearly 2.5 miles away but new archaeological research suggests that the semi-arid desert has been a site of human congregation—and maybe even spiritual significance—for tens of thousands of years.

In a study published in Nature, researchers found calcite crystals and ostrich eggshell fragments that show signs indicating that humans collected them. Not only is it difficult to find deposits in layers of rocks like these, it is even more unusual to find deposits that are this ancient—these finds are estimated to be around 105,000 years old.

The Kalahari, covering a large swath of Southern Africa, receives an erratic amount of rain every year, with heavy thunderstorms in summer months and extremely dry winters. But rains in the Kalahari drain instantly through its sand dunes, creating an effective drought. Despite this, archaeologists challenge the notion that the coastal environments of southern Africa were the only home for early humans. “It tells us that people were capable of exploring completely different environments, they were not tied to the coastline,” Michael C. Meyer at the Institute of Geology at the University of Innsbruck, Austria and also one of the authors of the study says. This new evidence suggests the Kalahari could have supported people as well.

Though there isn’t definitive evidence as to exactly why these crystals and eggshells were found collected in a rock shelter, both archaeologists and geologists involved with the study have some solid hypotheses. The artifacts show no sign of wear and tear, nor any modification to suggest they were used as tools. The researchers also found an abundance of preferable raw material for stone tools all over the hillside, which early humans certainly would have used instead of shells and crystals.

Robyn Pickering, a geologist and director of the Human Evolution Research Institute at the University of Cape Town who was an author on the study, notes that the other explanations for how these crystals might have gotten here without human intervention don’t seem to fit into the geology at Ga-Mohana. One explanation would be that the calcite formed as water flowed through the area. But crystals formed this way would be aligned in the same direction, whereas these are not. Crystals can also naturally accumulate in the roof and walls of the shelter, and could have just fallen. But there was no immediate source of calcite found inside or near the cave to suggest that this occurred.

“The closest source that we found for these kinds of crystals are over two kilometers [1.25 miles] away,” says Ben Schoville, a senior lecturer at the University of Queensland who helped lead the search for the crystals. “So we know that people were bringing them in. And when we excavated them, we actually found most of them in a pretty small area the size of a basketball.”

By ruling out both of the explanations mentioned, it seems that the relatively high concentration of crystals in this 105,000-years-old layer is no accident. These crystals were deliberately collected and brought to the site. This kind of behavior is indicative of what archaeologists call complex human behavior. As complex human behavior is basically “people doing things for non-utilitarian purposes,” explains Pickering. “Collecting beautiful crystals, which have no functional purpose? We identify that as a trace of complex behaviour.” Evidence of this type of behavior has often pointed to the coasts of South Africa, but these new findings challenge that narrative.

While scientific documentation of early human origins has always pointed firmly to Africa, much of the research suggested it was mainly coastal areas that housed these peoples. But newer studies have pinpointed the inlands of Botswana and southern Africa as the site of some of the first Homo sapiens. The discovery of these 22 white calcite crystals and eggshell fragmentations further supports those theories. The ostrich eggshell containers in particular, which could have been fashioned to be water containers, and the rock shelter where they were found hint at a time when the Kalahari desert was much more wet than it is today.

The rock shelter looks like a cave, but is much more shallow and was created by erosion over time into the hill. It is covered in another type of rock formation called tufa, a type of limestone consisting of calcium carbonate. Pickering notes that the tufa formations must have been created by standing pools of water above the rock shelter that later flowed down the sides of the shelter. “The way they form is [through] water just cascading down the sides of the rock shelter. And as that happens, that turbulent flow causes the calcium carbonate to precipitate out of solution.”

“So at the time, when they were active, there were waterfalls pouring down the side of the rock shell,” she says. “That’s a really different picture from a really arid area today.”

After dating parts of this tufa formation, Pickering and her team found that one of these episodes of rock formation occurred exactly between 110,000 and 100,000 years ago—at the exact same time as humans would have been occupying the rock shelter. That means this early Homo sapiens presence coincided with a period when this part of the Kalahari had waterfalls. This evidence, together with the fact that the eggshell fragments seem to have been burned and lack any signs of being collected by carnivores or scavengers, lead the researchers to infer that they could have been used to collect and carry water.

Though the spiritual practices from 105,000 years ago are long lost, Ga-Mohana hill and its surrounding areas are now home to modern communities with their own ties to the landscape. The region is still considered a spiritual place today. For that reason, the team were careful to leave no trace of their excavation to ensure that the land remains as it was before they arrived.  After all, as we scour the earth in the pursuit of science, respecting living communities is just as important as discovering ancient ones.