It all went down 36 million years ago. 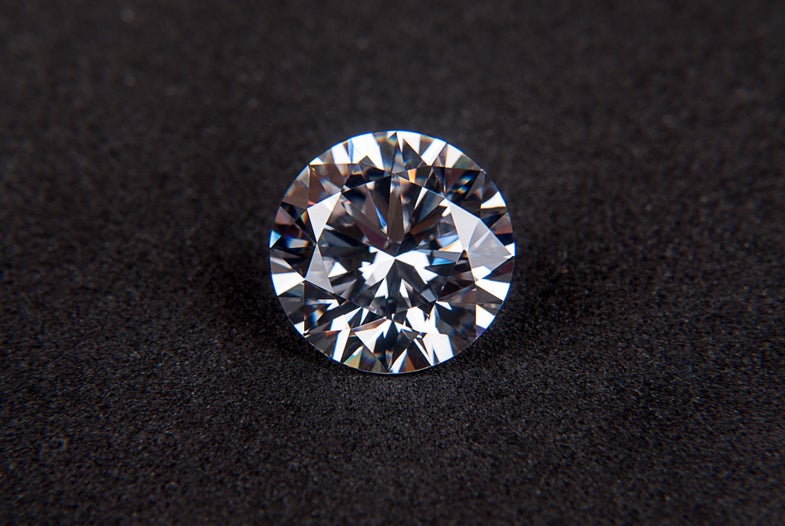 About 36 million years ago, an asteroid slammed into Canada and created a fake diamond, which over the millennia degraded and transformed into a shiny black rock. Now, geologists have used that gem to confirm a new temperature record for the Earth’s surface: 2370 degrees Celsius.

This is not exactly the geologists’ standard test—but it is incredibly accurate. We know that this diamond substitute only forms above 2370 degrees Celsius, so we know that upon impact at least a small chunk of the surface reached that point. Just take a moment and consider how spectacularly toasty that is: 4298 degrees Fahrenheit. That’s half the temperature of the Sun. And we only know this because that brilliant burst of heat briefly created a fake diamond, otherwise known as cubic zirconia.

Cubic zirconia hardly ever occurs by chance, mostly because it doesn’t often get up to 4298 degrees Fahrenheit around these parts. And in its natural form, it’s terribly unstable. It decomposes easily into other, related crystalline forms. So it was only when geologists found zircon and analyzed its structure that they were able to determine that it used to be cubic zirconia, thus establishing the new heat record. They published their results in the journal Earth and Planetary Science Letters.

This is all quite exciting for geologists, because it gives them a better understanding of how our planet’s crust formed in its early years. There was a period where space debris bombarded the surface, and all those impacts must have changed the spots they hit. Collisions help reactions to happen, both by physically slamming things together and by creating heat with which to fuel them.

It’s also exciting for non-geologists because, well, cubic zirconia is just inherently interesting. Today we think of it as a cheap alternative to diamonds, but somehow in a kitschy way. It’s a way to look like you’re wearing diamonds without actually paying for them, and (because we’re all secretly judgmental) that’s given the stuff a bad reputation.

The truth is that most people, even some jewelers, can’t tell the difference with a naked eye. Cubic zirconia isn’t carbon-based, but non-microscopically it does look almost exactly like a diamond. And because nearly all of it is synthetic, it’s all perfect. Earth-forged diamonds have imperfections, and though we consider the best stones to be those with the fewest flaws, we also value them for proving a diamond is real. Take away the imperfections and the stone looks too good to be true.

But the cool—or rather extremely hot—thing about cubic zirconia is that it requires such an incredibly high temperature to make. So high, in fact, that nothing can hold it. Literally. Normally you would heat a crystal like this in a crucible of some kind, which is a vessel designed to hold things at high temperatures. Platinum crucibles can hold substances at around 1200 degrees Celsius, and those are the best we have. To make cubic zirconia, you have to force it to make its own crucible.

This wasn’t even possible for most of human history. Only the invention of the microwave oven helped us figure out how to do it. As Hot Pocket connoisseurs know all too well, microwaves are excellent at melting the interior of an object without also heating the exterior. The principle works a little differently with cheese and tomato sauce than with the components of cubic zirconia, but is effectively the same: the center melts, while the outside can stay relatively cool. This allows CZ manufacturers to melt down the inside of a block of crystals while leaving the outside intact. And if that isn’t metal enough for you, it also happens to be called a skull crucible.

Anyway, it’s only because we know all of this about fake diamonds that we could determine our planet’s impressive new temperature record. Thank god for costume jewelry.