This ancient society passed power down from woman to woman

The evidence lies in a Chaco Canyon crypt 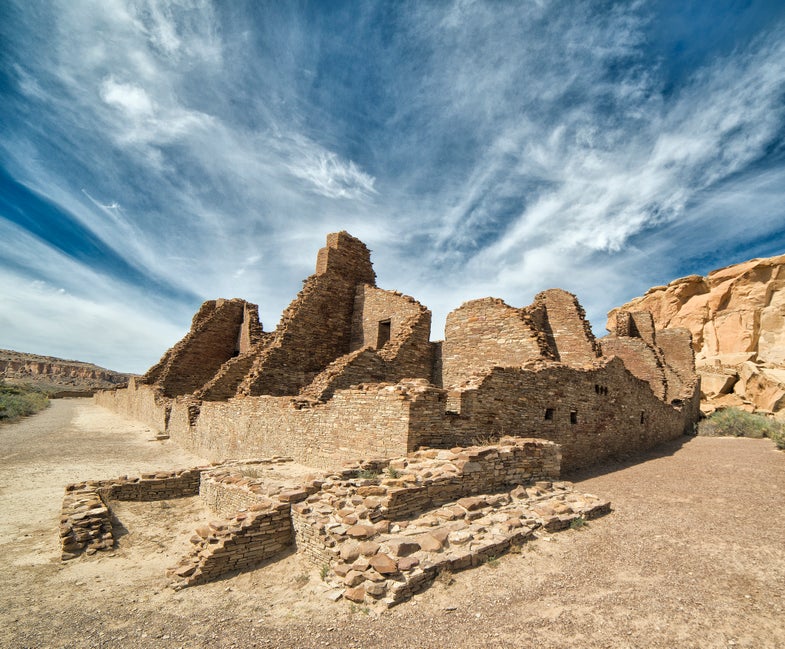 In a colossal 650-room structure built over a millennia ago in present-day New Mexico, women ruled.

This stone structure—dubbed Pueblo Bonito—is the largest of the “great houses” the Puebloan people constructed in Chaco Canyon, beginning around 800 A.D. Inside, one curious room was not meant for the living. It served as an elaborate crypt containing 14 fantastically decorated bodies, and when alive, these folks clearly held high status. One individual was dressed in over 11,000 turquoise beads and pendants, along with 3,000 shell adornments from the Pacific Ocean. To learn about this meticulously bedecked group, researchers analyzed the DNA from skeletal remains previously excavated from the crypt. Their results, published Tuesday in the journal Nature Communications, show that these figures all descended from an elite female line.

The Puebloan society that built these massive, apartment-style edifices was undoubtedly sophisticated. They adapted to dry climes by constructing irrigation systems and reservoirs, growing enough food to sustain thousands. They also tapped into long-distance trade networks, bringing them some pretty cool things, including large abalone shells from southern California, and scarlet macaws and chocolate from Mexico.

But, like many cultures at the time, they didn’t have a written language, so it wasn’t known until now if they passed down power through the male or female lines. “This resolves it,” says Dogulas Kennett, the study’s lead author and an anthropologist at Penn State University.

To determine matrilineal descent, the team gathered mitochondrial DNA from nine of the buried bodies in the crypt. DNA in a cell’s nucleus comes from both parents. But mitochondrial DNA, which lives in a cell’s energy-producing organelle, the mitochondria, is passed exclusively from mother to child. The researchers discovered that all of the crypt’s occupants had identical mitochondrial genomes, proving that the lavishly decorated bodies—both males and female—were descended from the same maternal lineage.

What’s more, it seems that this family reigned over Pueblo Bonito—if not other great houses as well—from the onset of the canyon’s occupation.

“The DNA evidence shows that this unique family retained control of the pueblo for as many as 350 years,” says Stephen Plog, an archaeologist at the University of Virginia who worked on the study. Previously, researchers didn’t think that such a hierarchical society existed so early in Chaco Canyon. Now it appears to have persisted for over three centuries.

Such a sustained period of uninterrupted rule is impressive. Yet the family’s rule, like the whole of Chaco civilization, ended around four centuries after the first great houses were constructed. People deserted the canyon, leaving thousands of rooms vacant.

A common explanation is a severe drought in the Southwest, which began around 1130 A.D, explains Plog. Tellingly, “this is when you see the last construction in the canyon,” he says.

There’s a range of other possibilities. The area is relatively unwooded, so cutting down too many trees over the course of centuries of occupation could create devastating soil erosion and hamper agricultural production. Perhaps there was social strife. Nothing was written down, so we can’t be certain.

The revelation that a single family held dominion over the largest of the 12 great houses raises new questions, like what role the family played in the emergence and decline of Chaco society, explains Kennett, the study’s lead author.

“Did something happen to the lineage that had a reverberating effect on the entire population?” asks Kennett.

There are still rooms to further investigate. Perhaps another crypt will reveal more.