“Regular TV” just won’t cut it anymore. Here are our picks for the best streaming devices to access movies, TV shows, music, and games with the click of a button. 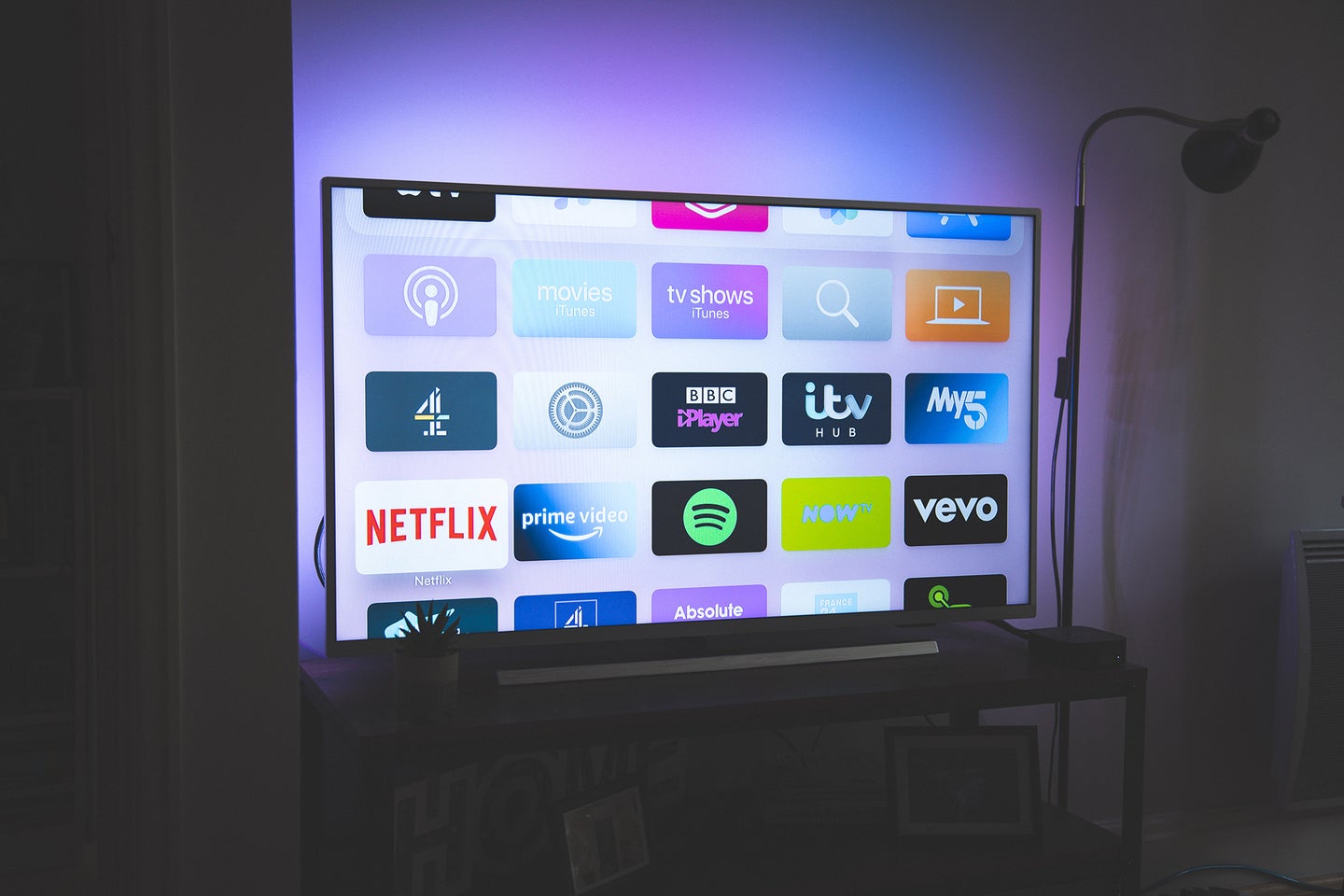 No matter what content you want to watch, these streaming devices have got you covered. Nicolas J Leclercq via Unsplash
SHARE

In the past few years, streaming has gone from an alternate to television to the new definition of television. The concept of “network” TV is becoming more and more obsolete as binge-watching and subscriptions have replaced channel surfing and rigid program scheduling.

Using devices such as Amazon Fire TV, Apple TV, or Roku, along with subscription or pay-per-view services such as Amazon, Hulu, and Netflix, you can watch new and old movies, and past and current TV shows. The best streaming devices even allow you access to photo apps and social media sites on your TV. If you don’t already have a smart TV or Blu-ray player, a dedicated streaming media device is a simple way to make any TV a smart one. And even if your TV is internet-capable, a dedicated streaming device may be more convenient to use or offer some services you can’t get from the television. Here are our favorite streaming devices, and why we think you’ll appreciate them too.

How to find the best streaming devices

There are two key things to consider when trying to pick the best streaming device: Where you watch, and what you want to watch. The first involves you taking stock of your entertainment devices, considering your television’s built-in capabilities, its location and size, its connectivity, and how accessible it is when adding or removing accessories. The second part involves understanding that certain devices are aligned with certain content providers, and exclusivity and programming blackouts may be a factor. Going in with a sense of which platforms you’re eager to watch—as of this writing, for example, HBO Max is not supported on Roku devices—will help you avoid disappointment.

Do you want a streaming stick?

A streaming stick refers to a compact streaming device that is usually about the size of a thumb drive and plugs directly into your television via its USB port. Its tiny size is convenient and aesthetically pleasing. You won’t have any unsightly cords hanging down from your wall-mounted TV, nor will you have to worry about a mounted television being near a mantle or table so a set-top style streaming device can rest on it. A stick takes up no space and can be easily plugged and unplugged if you need to switch TVs or computers.

The downside is that streaming sticks have much less memory capacity than a set-top device (it’s rare to find one with more than 8GB), and often that will prevent you from being able to update its internal software. For that reason, streaming sticks tend to get outdated more quickly and need to be replaced. While that can be a hassle, streaming sticks are usually much more affordable, so replacing one after a few years isn’t a huge burden.

Not only does the Amazon Fire Stick offer major streaming channels such as Netflix, Disney+, HBO Max, and, of course, Amazon Prime, but certain channels (including Prime and Disney+) are also available in Dolby Atmos immersive audio. The stick can also connect with Alexa, which allows for voice control, voice searching, and even collaboration with other smart home devices.

Do you prefer a set-top style?

Like the cable box of old, some of the best streaming devices are a bit more visible, but also offer more power and versatility. A good set-top style streaming device is designed to be the focal point of your home entertainment system, offering access not just to TV and movies, but also music channels, YouTube, and even some internal games.

It’s important to consider not only content and platform availability, but also picture and sound quality (if you have a 4K TV, you want to be sure to get a device that supports 4K playback) as well as overall user-friendliness. Most set-top style boxes feature basic connectivity (an HDMI cable to go into the TV, and a power cable) and can be up and running right out of the box.

The Roku Ultra has all the high-tech features you want from a streaming device, while still maintaining a seamless and easy-to-navigate user interface. This model features a new and improved quad-core processor that ensures that you can launch and watch in mere seconds without coming across that dreaded loading icon. With additions like a convenient lost remote finder, Bluetooth streaming, and voice controls, this pick is made for those who love to stream.You can also connect the included earbuds right into the remote for private listening. (Great for late-night binging without waking up the house!)

Is a gaming console style best for you?

Some people, understandably, don’t really want to keep adding new devices to their entertainment center, even ones that happen to be small and non-invasive. Gaming devices have slowly evolved into all-in-one command centers for everything you play, watch, or listen to, so it’s not surprising that they can easily be turned into a streaming device as well.

Via downloadable apps, you can get nearly every major streaming service directly on your console, including Netflix, Amazon Prime, Hulu, Disney+, and even specialty services like Criterion Channel or Crunchyroll. Going this route, however, does mean you need to pay for your console’s cloud gaming subscription service on top of whatever fees you’ll pay for the streaming channel subscription, but since nearly all games require some kind of online access—and most gamers engage in some kind of multiplayer online experience–it’s likely you have such a subscription in place regardless.

The PlayStation Now subscription service opens up the full potential of your PS5 so you can stream games, TV shows, and movies, and even connect to services like PlayStation Music (powered by Spotify). You get access to Netflix, Amazon Prime, Hulu, HBO Max, and Apple TV, in addition to all of your games’ online multiplayer options.

The 4K television has become a lot more affordable in recent years, and therefore a lot more ubiquitous. Even those who don’t want to shell out for a 4K Blu-ray player can get in on the action, with streaming channels like Disney+ offering full 4K streaming—if you have the right capabilities.

A 4K display is defined as having at least 8 million active pixels. For a TV, that means a standardized resolution of 3840 x 2160. The resolution in 4K movie theaters is slightly higher at 4096 x 2160. Either way, it’s four times the number of pixels of a 1080p display and over 23 times the resolution of standard-definition television. That makes for a significant jump in clarity, especially if you have native 4K source material to watch in that resolution. Even if you don’t, companies like LG, Samsung, and Sony have developed impressive up-converting technologies that scale 1080p and lower resolution content to 4K with various image enhancements. Finding a streaming device that can support 4K will help you get the most out of your 4K set.

The Apple TV 4K pairs 4K HDR picture with Dolby Atmos sound, delivering an impressive cinematic experience across Disney+, Netflix, Amazon Prime, HBO Max, and even ESPN. The device connects with Siri, which allows you to activate voice commands and set preferences, and it even has its own games through Apple Arcade. You can also connect it to your Apple AirPods for more private listening.

Does your TV already have streaming built-in?

A sure sign that streaming content has replaced traditional TV is the abundance of televisions that arrive out of the box with built-in streaming capabilities. Some smart TVs have internet access, and therefore allow you to download apps and access content that way, and then there are others that have, say, built-in Roku technology that allows you to manage your viewing the same way you would with an external Roku device, minus the additional hardware. The only real difference is that Roku may not be able to access every platform you’re looking for (such as HBO Max, which we mentioned earlier), but otherwise, either option allows you to start streaming with nothing more than a TV and a strong WiFi signal.

The LG OLED CX delivers stunning 4K resolution, but is also packing some impressive credentials behind the scenes, too. Its α9 Gen 3 AI Processor 4K powers its ThinQ AI system, meaning you get fast and versatile performance. The LG has robust 2.2-channel Dolby Atmos sound, and supports both Amazon Alexa and the Google Assistant, allowing you to search for content and perform tasks with voice commands. You can also cast video from your iPhone or tablet using AirPlay 2.

Q: Do I have to pay an annual/monthly fee for a streaming device?

No. The devices themselves are just the messengers, and you only have to pay for them once, but you will have to sign up for annual or monthly fees for the individual channels such as Netflix or Disney+. (It’s like you only pay once for the Blu-Ray player, but need to buy each individual Blu-ray disc).

Q: Do I need a brand new TV in order to connect one of these devices?

It depends on what kind of connection ports your old TV has. If it has an HDMI port, then it will work with most players. If it doesn’t have an HDMI port but it has RCA ports (red/white/yellow), then you need to find a device that offers those (or invest in an adapter).

Q: Do I need a separate streaming device if I have a smart TV?

Probably not, but if your smart TV has a specific type of streaming device built-in (like, say, Roku) then you may need a separate device to access channels not available on that platform.

Best budget streaming device: What you get for under $20

One of the best and most accessible ways to get into streaming content is the extremely affordable Roku 3903 SE. It features a simple HDMI connection, and allows you access to a range of premium streaming channels. It doesn’t have an ethernet port, so it relies entirely on a wireless connection—but that’s only a concern if you have shaky WiFi.

Shopping time! Time to buy the best streaming device for you

Whether you’re looking to upgrade your entire home entertainment system, or just itching to avoid any further streaming television FOMO, there are easy and affordable options to get you started. From all-in-one smart TVs to simple plug-and-play devices, there’s a means of tapping into digital content regardless of your current set-up. Just remember to consider your home WiFi strength and capabilities, how much space you have for additional devices, and what channels and subscriptions you most want to dive into to find the best streaming device for you. The technology keeps getting more streamlined and advanced as streaming TV continues to put all of those final nails in the coffin of “regular TV.”