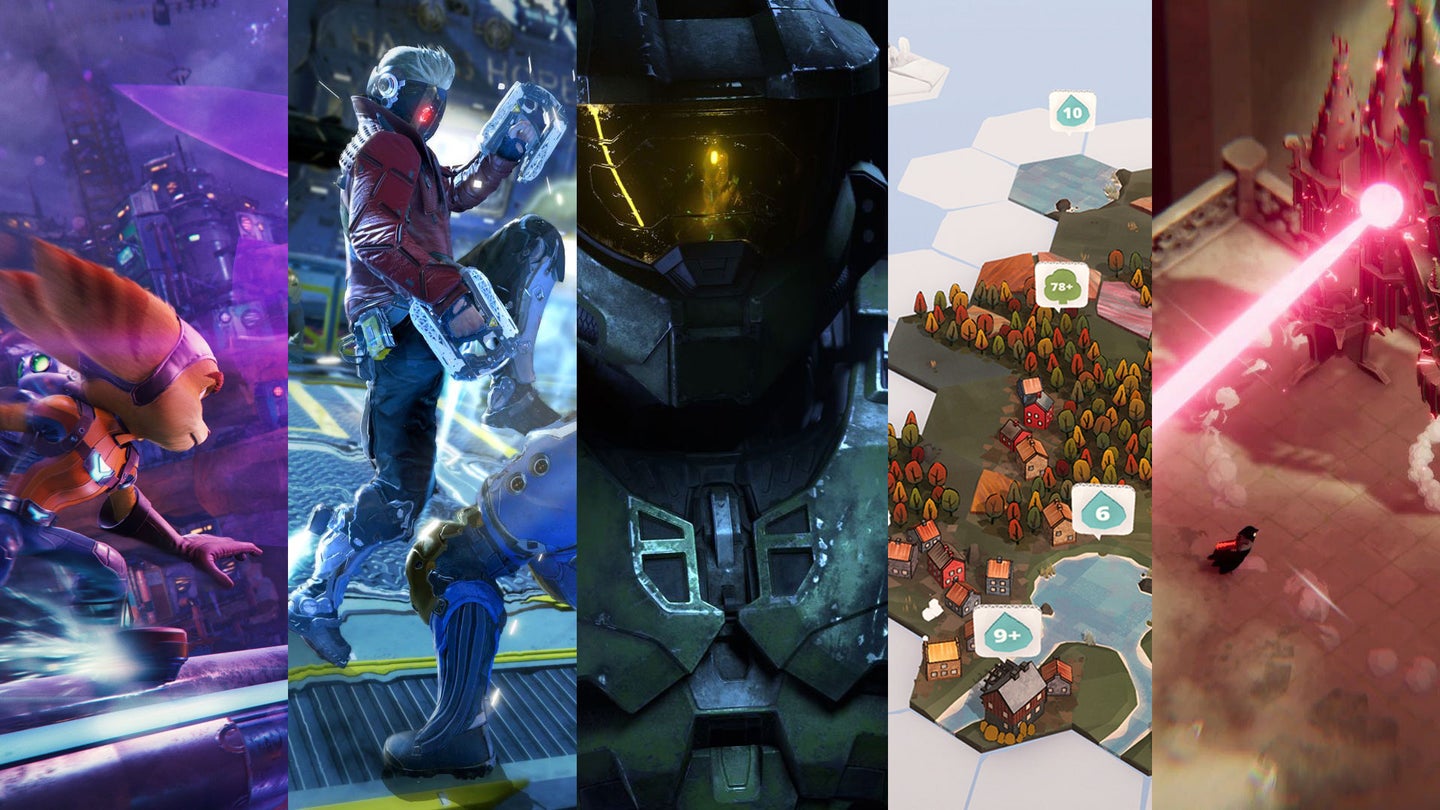 Once again, video games were good this year.

Every year around this time, there’s a weird surge of optimism among gaming nerds on the internet. Critics, reporters, developers, and fans all rush in to say, “Well actually, this was a great year for video games!” As if there was any doubt. There are always great new games coming out, telling compelling stories and distinctive experiences. And though pundits, myself included, occasionally take some of them down a peg, we’ve long since moved past the point where there are good years and bad years. Some are better than others, sure, but there are always great new things for people to play. (Increasingly, the tricky part is finding them. But that’s why we’re here.)

So this was a pretty good year to play a lot of video games.

If there’s a theme among the best video games of 2021, it’s creature comforts. We’re wrapping up the second year of the pandemic, with all the pains and prohibitions that it’s caused. It shouldn’t come as a surprise to anyone that this year would push us—or maybe just me—to appreciate familiar spaces and established gameplay styles. Looking back at the games I enjoyed most, I see famous game series from my youth, technical spectacles, an adaptation of a fun comic/movie franchise, and a playground game reborn. Each game on this list finds a unique way to wiggle its way into your heart: through story or mechanics or worldbuilding or sheer charm. I wholeheartedly recommend them all if you want something new to play or need to lose yourself up to something as the year draws to a close.

10. Marvel’s Guardians of The Galaxy

Marvel’s Guardians of The Galaxy took me by surprise. Action games inspired by, but not directly linked to, Hollywood blockbusters often fall short of the movies they’re imitating. But Guardians’ connection to the MCU is only skin-deep. The game tells a story of its own, painting new portraits of characters Marvel fans already know and love from various other mediums. Though it’s a classic beat-em-up where you spend much of your time knocking around space pirates, space cops, and space cultists in spectacular team brawls, Guardians’ story takes center stage. Full of charm, wit, and heart, guiding this Guardians team to wrestle with their own demons is just as compelling as dealing with the aliens … which also sometimes look like demons.

Death’s Door reminds us that there’s nothing wrong with following a familiar formula, so long as you know what you’re doing. A tightly wound action-RPG in the vein of The Legend of Zelda, you swing swords, shoot bows, solve puzzles, and fight fantastical monsters. Same as it ever was. Except that its incredibly intuitive and responsive controls make every little fight a challenge and a pleasure. And it has a fascinating premise: As a soul-reaping crow who has lost its bounty, you must explore a dying world and execute monsters that have overstayed their lifespans to find your way home. And those monsters look interesting and inventive, so it’s fun to push forward and see what the game will throw at you next. So, while Death’s Door doesn’t have a unique element on which to hang its hat, it wields its conventions distinctively.

After years on the back burner, Metroid is back. Metroid Dread, the long-awaited fifth part of the Metroid story, returns to the series’ classic exploration-focused 2D action with a careful, conservative modernization that keeps the series’ unique gameplay feel intact. At the same time, it cultivates a new vibe by surfacing the inherent horror undertones that have always run through the series. Exploring the planet ZDR, Samus endures constant pressure from mysterious aliens and extremely durable E.M.M.I. robots, who will push you to run, climb, shoot, and slide with speed and forethought. Simultaneously a revival and something completely new, Dread reminds us why there’s a whole genre of games trying to capture its magic.

Though he hasn’t been gone for as long as Samus, the Master Chief also deserves a warm welcome back after a six-year hiatus. Halo Infinite breathes new life into Xbox’s unofficial flagship franchise as an open-world shooter. Though it is far less scripted and controlled, Infinite captures Halo’s fly-by-the-seat-of-your-pants combat, which feels tactical and spontaneous at the same time. Meanwhile, the series’ legendary multiplayer, now free-to-play, feels sharper and snappier, even as it encourages unique, drawn-out duels between players. Halo Infinite feels nostalgic and refreshing at the same time, which is exactly what shooter fans needed this year.

In Loop Hero, a fascinating riff on the idle-RPG, your hero walks along a circular path, fighting enemies and earning loot as he goes. You don’t control the hero’s movement or combat—just upgrade his weapons and armor when you find better loot. Instead, decide how hard your hero’s road should be. Over time you earn cards for different kinds of land tiles to place on and around the hero’s path. Filling the world is your objective, but doing so recklessly will get you killed. Though your control of the game is passive, Loop Hero forces you to do just enough to keep you locked in and moving stuff around. It’s easy to pick up and endlessly repeatable, making it perfect for those days where you just want to veg out and play something low-stakes.

Dodgeball seems like an obvious subject for a video game. There’s conflict. It’s violent, but not gory. And it’s something that even kids will find approachable and familiar. So it’s remarkable that, as far as I can remember, Knockout City is the first notable dodgeball video game.

In squads of three (or occasionally four), players throw and catch balls at increasingly high speeds with simple, but nuanced controls that facilitate tense back-and-forth slugfests and team-oriented play. Toeing the line between arcade sports games and more complex competitive phenomena like Fortnite and Overwatch, the matches feel intense in the moment but feel light and breezy the second you win, lose, or disengage from a fight. Just like playing the original game at recess, it is both all-consuming and effortless fun.

We’re just over a year into the “ninth-generation” of game consoles, the PS5 and Xbox Series S/X era, but it doesn’t always feel that way. Many of the games on this list created exciting new worlds and cultivated new ideas without groundbreaking technical advances or new features enabled by the new consoles. Ratchet and Clank: Rift Apart, a revival of sorts for Sony’s PS2/PS3-era third-person action-platformer series, is the one game that felt like the future of gaming. Taking advantage of the PS5’s new processing power and NVMe storage, Rift Apart has the cinematic flair and polish of a Hollywood film, with grappling hooks where you pull yourself through portals and rail-grinding segments to escape towering robots. It is a visual feast, an exciting romp, and the best example of a generational leap you can play right now.

Psychonauts 2, the long-awaited sequel to the 2005 cult classic platformer, is a game about hearts and minds. As Raz, a junior member of the psychically enabled Psychonauts spy agency, you must dive into the minds of your friends, mentors, colleagues, and enemies to uncover a secret plot that threatens the world. In dungeons made from their subconscious minds, you learn that every person—whether you like them or hate them—has relatable, sympathetic problems that shape who they are, for better and for worse. Nothing in games feels more relatable, more powerfully human, than taking a tour through a character’s flaws and fears. And few things feel as rewarding as when you find a way to help them find peace with their issues … even if you’re doing it by whacking their regrets away with a psychic fist.

As someone who regularly plays video games for work and as a pastime, it can be hard to find ways to play without errant, stressful job-related thoughts interrupting my time off. The desire to actively avoid job-creep (and stress in general) has driven toward a particular subset of organizational puzzle games where you arrange and optimize, but don’t necessarily flex your brain to get the solve.

Dorformantik tasks you with building a European-style countryside out of procedurally generated hexagonal tiles. Every tile you put down has to touch at least one other tile, preferably with the sides matching. (If you’re a board game fan, it is effectively a single-player version of the popular tabletop game Carcassonne.) Like a mundane task that allows your mind to wander, playing Dorfromantik washes stress and sadness away by occupying your mind with peaceful tasks that demand your attention, but don’t tax you or command reflection. It’s great to play while you listen to Podcasts, detox from work, or simply need a moment (or many hours) of peace in a belligerent time.

Blending elements of “Rogue-Lites,” classic “Bullet Hell” shoot-em-ups, and other niche genres, Returnal—a portmanteau of “Return” and “Eternal”—is tough as nails and creepy as hell. Stranded alone on an alien planet where she can be killed, but never die, Selene Vassos runs and re-runs through ever-changing forests, deserts, and abandoned cities in search of escape—from the planet and from hallucinations that seem to be haunting her. You’ll slowly accrue an arsenal of weapons and upgrades on each run, but victory or failure always comes down to how long you can hold out, dodge waves of bright, colorful alien bullets as you cut through room after room of hostile aliens. The game’s mysterious plot and daunting difficulty instill a state of existential dread in every step, while pushing you to master its refined combat to grasp for the few moments of permanent progress. Though you’ll see elements of many games you’ve played before in Returnal, there is no game quite like it.