Masks, well-ventilated classrooms, and other precautions are key to reopening schools

Public health experts say there are ways to help ensure schools are safe. 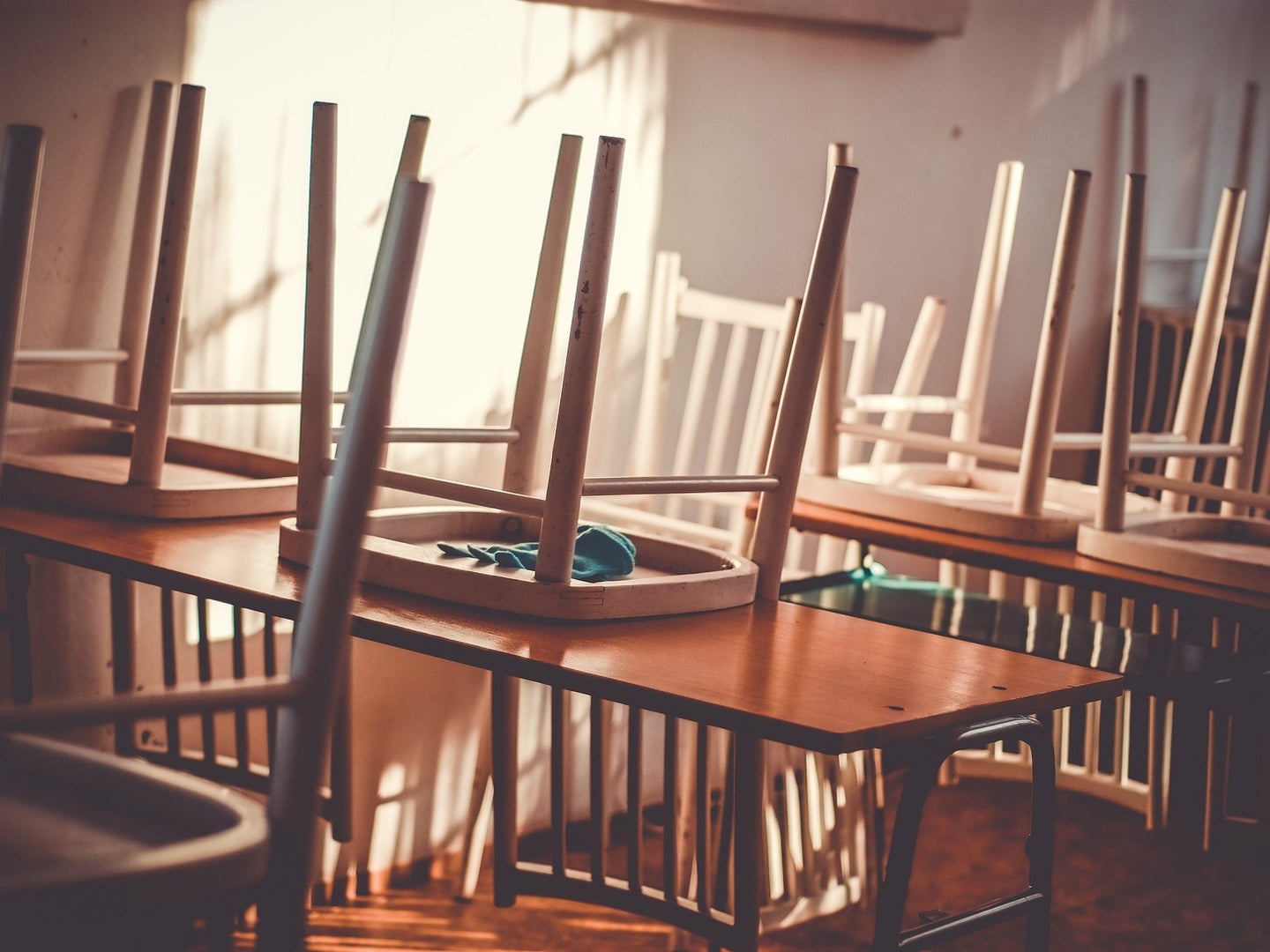 With an end to the pandemic possibly in sight, some schools are slowly starting to open their doors. Pixabay
SHARE

The ongoing COVID-19 pandemic has closed schools across the US for months at a time, shunting many classes online and forcing parents and educators to improvise. As the vaccine rollout accelerates and spring approaches—and with an end to the pandemic possibly in sight—some schools are slowly starting to open their doors, even if partially, beginning with younger students first and alternating in-person attendance with virtual to maintain adequate social distancing.

But in many places, including lower-income areas in the US, schools remain shuttered, and research says, quite emphatically, that the closures are taking a mounting and potentially catastrophic toll on student well-being.The good news is that public health experts say there is a path to reopening schools while keeping risks low—as long as schools stick to proper mitigation measures.

Remote learning has been hard on school-aged children

The research all but shouts that closed schools have been exceedingly harmful for students. The often-rocky transition to remote learning—and the wave of missed classes and disrupted lessons that followed—has severely hurt both children’s long-term learning and their life expectancy in ways that will be felt for decades.

These effects disproportionately weigh on students from low-income and ethnic minority backgrounds. “The bulk of schools that have remained closed…have been schools that tend to serve low-income kids,” says Dr. Dan Cooper, a pediatrician at the University of California at Irvine.

If kids from affluent homes can’t go to class in person, they might be able to fall back on the help of independent tutors or learning pods. Those resources aren’t nearly as accessible to the less privileged. Even something as simple as a parent helping their child with homework isn’t so easy when they might need to work multiple jobs just to support their household.

Plus, for many children, schools are more than a place of education—they’re a lifeline. Schools provide meals for children experiencing food scarcity, access to mental health and developmental services, socialization, and even just exercise.

Children with autism spectrum disorders or other developmental disabilities often rely on school staff for vital services. Forced to go remote, without the specialists who understand their needs, neurodivergent students are suffering, along with children who were already dealing with poor mental health before the pandemic. That’s concerning enough to begin with, and it’s compounded by the fact that children everywhere are facing a deluge of pandemic-linked emotional distress.

Kids’ physical health is also declining: Without schools as the main outlet for physical activity, Cooper says the US is experiencing a renewed surge in weight gain and obesity among adolescents. “There’s another pandemic that we’re witnessing,” he says, “that’s gotten worse as a result of the shutdowns.”

All these downstream effects add up to one big problem for America’s youth. “Has anyone sort of really put it all together and [shown] exactly how big are those losses?” asks Emily Oster, a health and development economics researcher at Brown University. “I’m not sure. But they’re definitely there.”

In the US, there have been some school systems that have successfully opened—some fully, some partly—despite opposition from teachers’ unions. But while many public schools remain closed, plenty of private and parochial schools have been able to reopen and are currently running in-person classes. Cooper pinpoints parochial schools as reopening while still serving a socioeconomically diverse student body.

Cooper also thinks that public schools in more affluent areas benefit from the fact that they’re more likely to have parents who are physicians and healthcare workers—parents who can give reliable medical information back to schools and help them reopen in a safe manner.

Schools can protect both kids and teachers through measures that are, by this point in the pandemic, fairly self-evident. Those include masking up, frequently washing hands, ensuring that classrooms are well-ventilated, holding classes outside if possible, and practicing good social distancing. That last measure doesn’t have to be complex. Schools can spread out desks, install barriers between desks, or group students into pods or cohorts, to name a few strategies.

But with physical space at a premium, many schools have partly reopened to ensure proper social distancing, holding some classes in-person while others remain virtual. Students may come on alternating days to decrease crowding, for instance, or only lower grades might come to the building. Studies suggest  younger kids don’t spread COVID-19 as easily as their older siblings.

Parents have a role to play in opening schools safely, too. If kids are showing any symptoms, especially fever, adults need to keep them at home. To keep students and teachers safe, it’s crucial for schools and families to properly communicate, public health experts say.

Of course, there’s still the elephant in the classroom: When will children get their shots? As trials press on, it’s likely that we’ll start to hear fiery debates about that timeline. But again, public health experts say that for now, vaccines aren’t necessary to reopen schools, if those schools can follow proper safety protocols.

The US Centers for Disease Control and Prevention (CDC) has also said that teacher vaccination isn’t necessary to reopen schools. And Cooper agrees. “I am totally in favor of ‘Let’s get the teachers vaccinated as soon as we possibly can.’ But I would not make that a condition for reopening schools at all.”

The CDC has guidelines, but experts are divided on the details

The CDC has issued a detailed system of parameters for whether or not a school should open depending on their community’s caseloads and positive-test rates. For schools, especially elementary level, in areas where those numbers are uncomfortably high, the CDC recommends partial opening.

Infection rates remain stubbornly above the CDC’s recommended limits in most of the country, even after several months of declining cases and increasing vaccinations. But some experts disagree with the CDC recommendations, arguing that they go too far and would lock too many students out of school.

Others doubt that mixing in-person and remote classes is even effective. While meant to make the most of the situation, it’s disruptive to learning, and its benefits aren’t unclear. The data so far is scarce, Oster says, but there’s little evidence that moving classes to such a hybrid model decreases the risk of transmission.

That’s because although classrooms will be less crowded, there’s no guarantee the students learning remotely are actually confining themselves to the home.

“If you have kids [in school] only three days a week, they’re doing something else the other two days,” says Oster. “If that something else is interacting with a broader population…that could be bad. It could be worse.”

What are the risks?

Of course reopening schools carries some risk—anything short of total isolation does—but in the States it’s hard to know for certain if it’s comparatively riskier than, say, keeping restaurants open. “In general, our contact tracing [in the U.S.] is so poor, that it’s not clear that we have a lot of information on what is and is not risky,” says Oster.

In Sweden, where many students continued in-person instruction even through the depths of the pandemic’s first wave, a study found teachers working in classrooms were at a higher risk of getting infected compared to those who worked remotely. But Swedish schools also never properly implemented measures like masking. If anything, their example shows how it’s up to schools to follow proper procedures.

Still, the challenges shouldn’t be overlooked. Ensuring adequate ventilation isn’t always easy, particularly in older or more cramped buildings. And social distancing can be difficult to maintain over the course of a school day. If schoolchildren eat lunch together, they’d have to take off their masks in close proximity, which is a genuine reason for concern: In healthcare workers, studies suggest too much time unmasked in the breakroom was a significant risk factor for contracting the virus.

But public health experts say that, where schools have reopened, whether partially or fully, there’s little evidence that high virus transmission follows. “The data, really even from the beginning of the pandemic, suggested that if mitigation efforts were taken at the school, that the fear that the school would become a reservoir for disease and spread is simply not true,” says Cooper. “It just hasn’t happened.”

Oster agrees. “I think most of the data we have is really reassuring,” she says. “We’re not seeing schools as centers of infection, as sources of significant spread.”

Ultimately, according to public health experts, it’s a matter of whether the costs of keeping schooling fully remote is worth avoiding a risk that can be minimized. The current evidence suggests that the physical, mental, and emotional toll children are now experiencing is too great to be ignored.